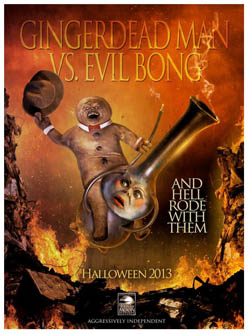 Full Moon Features is proud to announce the world premiere of GINGERDEAD MAN VS.  EVIL BONG on their new subscription-based video streaming service, FULL MOON STREAMING (www.fullmoonstreaming.com).  For the first time ever, fans can have the option to have a fully interactive &immersive experience by watching the “Ganja” Version, which is packed with interactive special features that happen in real time while the movie is playing.  At key points in the film, viewers can unlock extra scenes, Easter Eggs, and learn hilarious trivia. Then purchase exclusive gonzo merchandise like Evil Bong lighters and ashtrays, the double-sided Nookie Crisp/Weediessatire cereal, or even a replica of Masuimi Max’s greatest assets.  The Ganja Version also includes a Full Moon Treasure Hunt, where viewers can earn prizes by spotting the special Golden Moons hidden throughout the film.

“The at-home movie experience is changing to personal devices, and we wanted to be at the forefront of that trend with afully engaged, interactive experience,” explained legendary horror filmmaker Charles Band.  “In the same way that people love video games, fans can now actually be a part of their favorite films.  The possibilities are endless.”

It’s a War of the Colossal Freaks when serial killing cookie, Gingerdead Man, tracks down the lone survivor of his murderous rampage, Sarah Leigh (Robin Sydney), to take care of unfinished business. But his devious plans go up in smoke when Sarah meets Larnell (John Patrick Jordan), who has a pint-sized problem of his own. The Evil Bong, Eebee, has been unleashed once again. Bodies begin to pile up as Gingerdead Man carves a path for them. Their only salvation is to turn to help from the dastardly Bong. It’s one tough cookie versus one bad trip mother when the two Titans of Terror hash out a war in the Bong World. The stakes have never been higher.  Directed by Charles Band with the voice talents and cameos of Tommy Chong, Gary Busey, and many others.