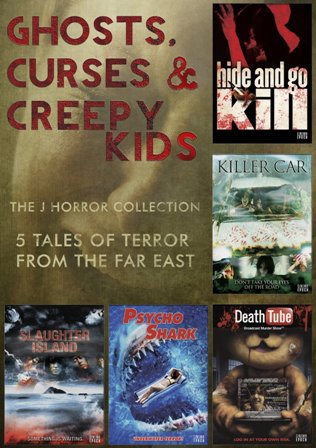 Five Japanese Horror flicks for the first time together.

A young girl gets hooked on a website called “Death Tube,” which broadcasts actual murders in real time. At first she didn’t believe it was real, until she is brought into the site itself. The killing game is about to begin.

A blog on a mysterious website quickly spreads like wildfire, starting a dangerous online game. At 3:00 in the afternoon, a teddy bear stuffed with rice and nails is sunk into a bathtub. The lights go out and the player is required to stab the bear with the knife, then write their experiences in the blog. But lately the comments have taken a dark, demented turn, as if the players are being possessed.

College students Miki and Mai arrive on a private beach on a tropical island. They can’t find the hotel where they booked their reservations, and have gotten hopelessly lost, until a handsome young man shows up, offering to take them to his lodge. But something is not right about the place. The owner’s fingernails are tainted with blood and Miki feels something sinister lurking nearby.

An attractive college couple goes on a road trip with some friends. Their destination: majestic waterfalls far away from civilization. Unfortunately the used car they bought is possessed by the tortured spirit of its original owner who met a tragic end behind the wheel. Now this “killer car” will take them on an unexpected detour… to the morgue.

A group of ten children travel to an uninhabited island that many believe to be plagued by an ancient curse. One by one they are stalked and butchered by someone or something. As the mystery unravels, signs show that the killer may be something much more sinister. A shocking twist concludes this tale of terror.