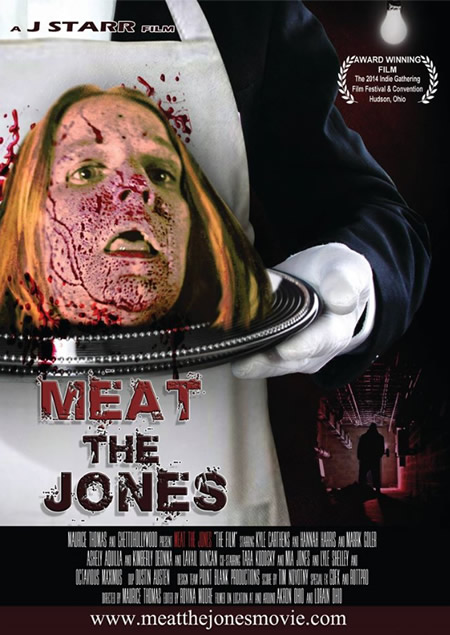 Meat the Jones in this humorous yet terrifying tale of a prestigious family of black cannibals… For years the Jones’ have enjoyed an endless supply of “cattle” by feeding on less fortunate people from the streets of Akron, Ohio. The Jones’ way of life is jeopardized by their daughter Kendal who is a newly converted vegan and doesn’t approve of her family’s dark, twisted ways. Kendal must decide on keeping up the family tradition or helping Ed, the newfound love of her life escape the Jones’ house of horrors, before he becomes their next meal.

Meat the Jones is partially inspired by both; black exploitation horror films of the 1970’s and slasher films of the 1980’s. Kyle Carthens is excited this story is getting a chance to be told commenting, “I am proud to be part of such a film and I am looking forward to seeing it on the big screen.” Kyle won an Emmy Award for his role in the television program Crime Stoppers Case Files: Northeast Ohio. He can be seen in the High School Football Film Underdogs and along side of Kevin Costner in the 2014 film Draft Day.

Meat the Jones began production in February 2013 and was shot on location in and around Akron and Lorain, Ohio. Meat the Jones also features the talents of Kenny Santiago Marrero, Kimberly Deanna, and Lavail Duncan as Uncle Charles. Release Date Information Coming Soon.