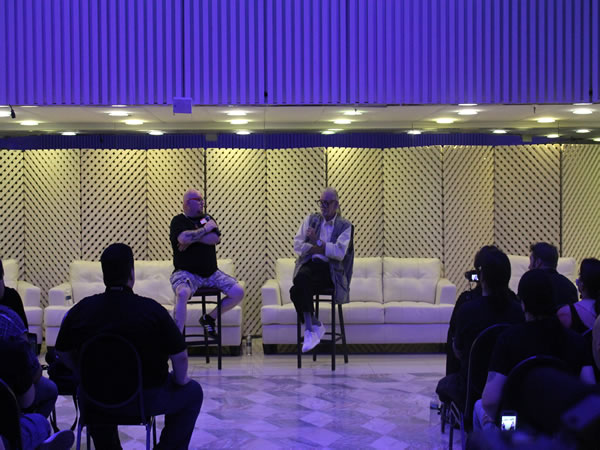 The discussion began with his breakthrough 1968 film, Night of the Living Dead. “We had the very first print of Night of the Living Dead in the car”, Mr. Romero said, “Russ Streiner and I were driving it to New York. On the way to New York we heard that Martin Luther King Jr. was assassinated…we knew at that time that what had happened was going to make the film a racial statement which was never our original intention.”

When asked which of his zombie films were his favorite, Mr. Romero said, without hesitation, “My favorite is Day (referring to Day of the Dead). Larry then pointed out that a young Greg Nicotero was among the cast and crew of 1985’s Day of the Deadand that Nicotero has since gone on to be one of the driving forces behind AMC’s mega-hit The Walking Dead.

While acknowledging that Nicotero was a good guy, Mr. Romero had some choice words for The Walking Dead.

Before handing the microphone to the crowd for questions, Larry asked Mr. Romero about his relationship with Stephen King and most importantly to horror fans, about his upcoming star on the Hollywood Walk of Fame. In true, humble, Romero fashion, he seemed to take it all in stride and with a casual smile.

You can watch the full interview below.