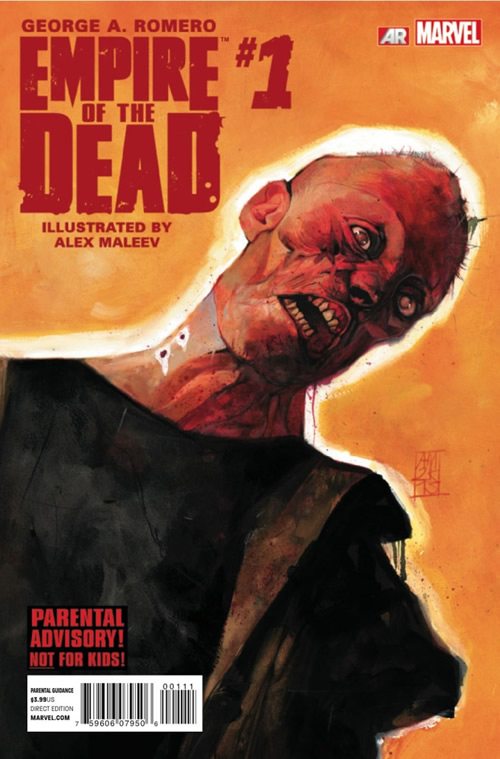 Synopsis: Welcome to New York City years after the undead plague has erupted-but just because Manhattan has been quarantined, don’t think that everyone inside is safe! ? Not only do flesh-eaters roam within Manhattan, but there’s another ancient predator about to take a bite out of the Big Apple!? Plus: It’s a terrorizing team-up in variant cover form when the Zombie Godfather unites with the Zombie King – Arthur Suydam!

Our Thoughts: Warning – Spoilers below.

The long-awaited zombie comic from George Romero and top-notch talent has finally arrived.  With the talent involved, would it stand up to the hype? The answer is a resounding YES.

When the comic was first announced I wondered if this would actually be considered a true part of the Romero-verse. While I do not like spoiling stories I must let everyone who is curious know that one of the main characters, Penny Jones tells a story that her sister told her about when their brother was murdered by a zombie. It turns out that her sister is Barbara, as in “They’re coming to get you Barbara.” Penny goes on to reveal that Barbara never died that night. Johnny dragged her from the house to an abandoned barn where he showed some signs of remembering who he was.  Shortly thereafter, the sheriff and a group of trigger happy locals opened fire on Barbara but Johnny moved in front of her taking the bullets, saving Barbara’s life.

Alex Maleev adds the perfect touch to this gruesomely good horror comic. His artwork delivers gritty realisim that adds to the flavor of the comic. Another good touch is how Maleev’s work is colored by Matt Hollingsworth. This is not a world filled with sunshine and lollipops and the artist/colorist duo make that well known.

The big surprise comes at the end as we learn that zombies aren’t the only thing around that go bump in the night. Romero reveals a vampire.