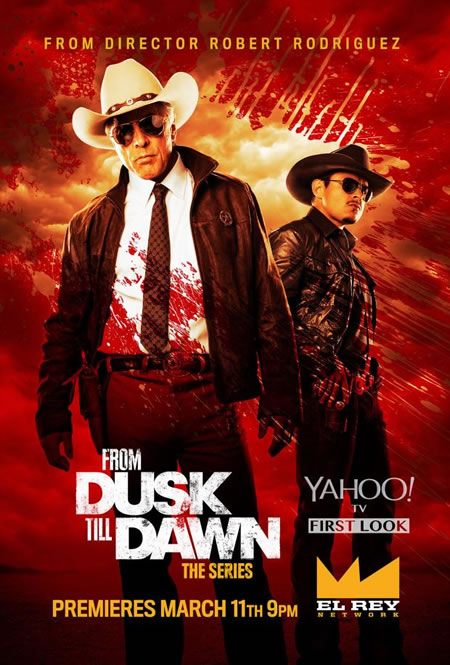 ‘From Dusk Till Dawn: The Series’ Season One Review

From Dusk Till Dawn: The Series Season 1 – Review

Synopsis: A Texas Ranger is in hot pursuit of the infamous Gecko brothers.

Our Thoughts: From Dusk Till Dawn is a new TV series based on the now cult classic film of the same title, created by Robert Rodriguez who directed the film. It is also the first original series for Robert Rodriguez’s new EL Ray network

The series basically takes the film and stretches is out over 10 episodes, while adding back stories and mythology to all the characters, in addition to adding new ones. Eiza González plays Santánico Pandemonium, whose role is much bigger than in the original film. The series begins with Santánico being thrown into a pit filled with snakes by native priests, where one crawls down her throat. A really interesting way to start the pilot if you ask me.

We spend the first few episodes following the Gecko brothers on their way to Mexico. D.J. Cotrona plays Seth Gecko and Zane Holtz plays his brother Richie. Richie is erratic and bit crazy, and has visions of an unknown woman, Santánico, telling him to set her free. Seth attempts to keep him in line unsuccessfully and several people are murdered a long the way. They kill a sheriff and burn down a liquor store, but a ranger survives, Freddie Gonzalez played by Jesse Garcia, and proceeds to follow them. Along the way the Gecko’s are in contact with Carlos, who sent them out on the job, and is played by Wilmer Valderrama. Carlos is a vampire, unknown to the Geckos, and helps them get to Mexico killing people as he follows them there. The Geckos end up taking family as hostage in order to enter Mexico, which is basically the same as the original film, but we get back stories and full character development for each of them. Robert Patrick plays Jacob Fuller, pastor and father to Katie played by  Madison Davenport, and adopted brother Scott, played by Brandon Soo Hoo.

The first several episodes are a slow build up to the Gecko’s at the Titty Twister, which they finally do at the end of episode five. Episode seven  is where things really get good and the vampires finally show themselves. The vampires are amazing snakelike creatures. The special effects are quite good, especially the gore. Elements of the story are changed of course. Richie doesn’t die and neither does  Santánico. She in fact has led Richie there in an effort to free herself from the curse holding her prisoner in the pyramid. The series actually traces the origins of the vampires all the way back to the Spanish Conquistadors. I found the mythology developed to be the most fascinating, bringing the story to a deeper level. The final three episodes are by far the best of the season, with the most action coming  in the final episode,  however episode seven may have had the most gore.

The drama in the original film is expanded and as a result the show is an interesting blend of drama, horror and action. The series is obviously meant for people who loved the original film but wanted to see more. Vampire fans will also enjoy it. It’s a bit heavy on the drama though, which casual fans may or may not like, however it does keep the viewer wanting to see more. If you saw the original film, you will have a general idea of what will happen, but the added story development and mythology is enough to keep you wondering what will happen next.

Most of the acting in the series is very good. Wilmer Valderrama who plays Carlos surprised me and stood out as one of the best actors in the show.  D.J. Cotrona and  Zane Holtz are also outstanding as the Gecko brothers. Eiza González is incredibly seductive as The Goddess Santánico. Madison Davenport is great as the emotional daughter Kate. Overall From Dusk Till Dawn is an interesting new series with a lot of potential. Luckily for fans, it’s been renewed for a second season.