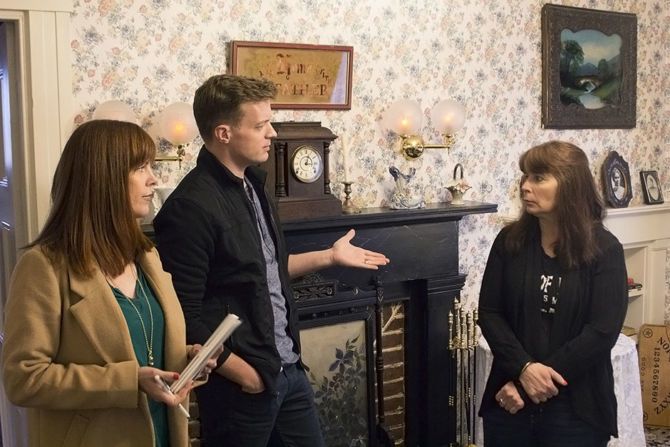 According to the official press release, TLC will be bringing back their successful “Friday Night Frights” schedule this fall with the second season of Kindred Spirits and the new paranormal object series Evil Things starting on Friday, September 15 at 9:00.

Kindred Spirits features investigators Amy Bruni and Adam Berry (both alums of the grand daddy of paranormal research shows Ghost Hunters) as “…they help real people tormented by paranormal activity in their homes.”  On the season opener, “Amy and Adam investigate one of the most infamous haunted homes in America: the Lizzie Borden House in Fall River, Mass. What was once a private residence-turned-murder scene is now a museum and B&B, where many paranormal teams have confirmed that the ghosts of the home’s original occupants still linger. Amy and Adam launch into one of their most harrowing investigations yet, but not to find the Borden family ghosts. Their unique goal is to help Sue, a tour guide, who believes her grandparents’ spirits are in the house trying to protect her from impending tragedy.”

Amy and Adam will be assisted by everyone’s favorite scarf-wearing psychic Chip Coffey (of Paranormal State fame) in this episode.  Coffey was also a frequent guest during the first season of Kindred Spirits as well.

Following Kindred Spirits at 10:00 p.m. is the new series Evil Things.  The series appears to follow the eye witness account spliced with dramatic “recreations” formula that are so common on Destination America as “Each episode of Evil Things features two stories of people who claim they’ve survived frightening paranormal activity caused by a haunted object ranging from toys to jewelry and even furniture. Anything can become a vessel for the dead. Based on compelling first-person accounts, each twisted mystery exposes the sinister secrets hiding within seemingly innocent items… some of which could be sitting in your own home right now.”

The premiere will focus on two separate tales, one featuring a mysterious backpacking trip through Europe and the other featuring a box “…of mysterious videotapes stashed behind a false wall in (an) attic” (and, as we all know, no box of video tapes in your attic is ever good news, haunted or not.)