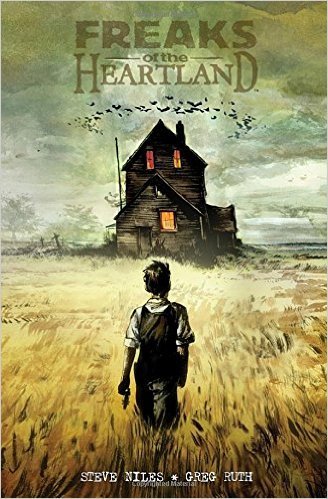 Freaks of the Heartland in Development for MTV

One of the most well-known names in horror comics, Steve Niles, may soon see one of his works adapted for television. Deadline reported yesterday that MTV is developing a drama based on the 2004 Dark Horse comic mini-series “Freaks of the Heartland.” While the original comic was written by Steve Niles with art by Greg Ruth, this series will be written by Geoff Davey and Peter Sattler (Camp X-Ray). David Gordon green will produce and direct.

The story revolves around a boy named Trevor and his very different younger brother. Although the younger brother has been kept hidden away for many years because of his freakishness, now the family’s secret is about to be revealed and we will learn that Trevor’s brother is not the only freak in town.

This is all part of the same Universal Cable Productions deal with Dark Horse that is behind the sale of “Harrow County” to Syfy.