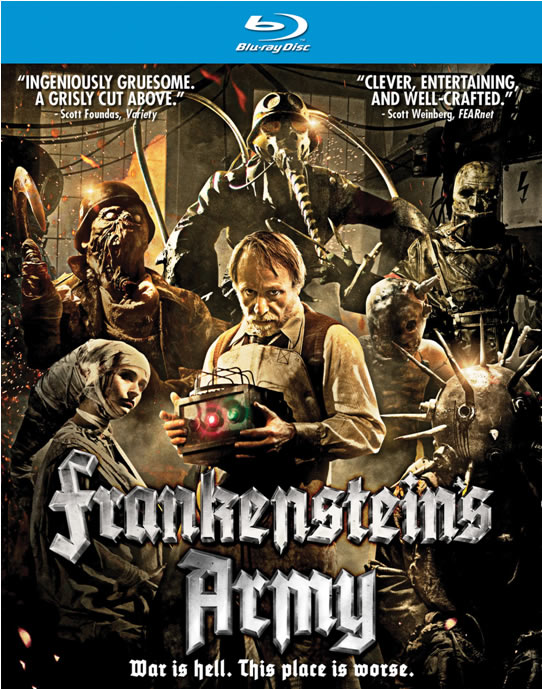 FRANKENSTEIN’S ARMY arrives on Blu-ray and DVD in September

“FRANKENSTEIN’S ARMY is funny and original, with innovative costumes and set designs. It’s sure to please horror fans,” says The New York Post.

In the dying days of World War II, a battalion of Russian soldiers find themselves lost in enemy territory in eastern Germany. One soldier (Alexander Mercury, The Golden Compass) has been ordered to make a propaganda film as the squadron makes its way across the wintry landscape, and what follows is a thrilling mix of found-footage shocks and classic horror. Stumbling upon a village decimated by an unseen terror, the Russians are lured into the secret lab of deranged scientist Viktor (Hellboy’s Karel Roden). Viktor has unearthed the journals of the legendary Dr. Victor Frankenstein and has used them to assemble an army of supersoldiers stitched together from the body parts of fallen Germans – a desperate Hitler’s last ghastly ploy to escape defeat.

Leaderless and faced with dissension in their dwindling ranks, the Russians must find the courage to face down this fearsome new brigade of flesh-and-metal “zombots” – or die trying. A nightmarish fantasy thrill ride unlike any other, Richard Raaphorst’s FRANKENSTEIN’S ARMY, which was filmed at abandoned World War II sites in Prague and throughout Europe, is a delirious plunge into the darkest depths of insanity.
Â