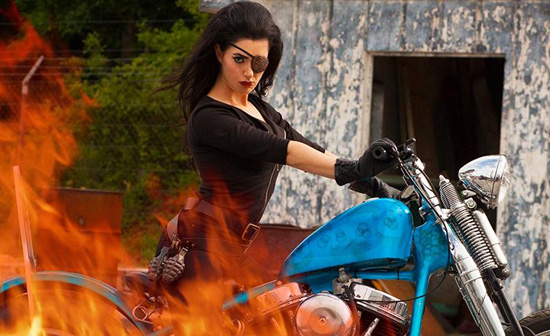 FRANKENSTEIN CREATED BIKERS, the much anticipated sequel to the 2011 cult favorite “DEAR GOD NO!” will begin its theatrical screenings in competition opening weekend at the 40th Annual Atlanta Film Festival (ATLFF), April 1-10.

“We’re really excited to kick-off the next chapter of our production with a prestigious festival in the same state where principal photography took place,” explains director James Bickert. “ATLFF has a rich history of bringing quality independent cinema to the masses, and our truly Southern exploitation film will bring some late-night fun to this 10-day extravaganza of international cinema. Genre fans know we always have a few tricks up our sleeves when we screen a new film and this event is going to knock your hat in the creek. “

Filmed in 10 Georgia cities on Super 35mm film, “Frankenstein Created Bikers” centers on the re-animation of the South’s most notorious biker gang – The Impalers. Dr. Marco and his assistant are performing gruesome experiments in their asylum lab and have resurrected the thrill-kill motorcycle club to capture a Bigfoot carrying a pathogen that will allow them to perform a human head transplant. When news of the gang’s resurrection draws the attention of bounty hunters, law enforcement and rival gangs, the lofty aspirations of these mad scientist start to spiral out of control. Things get even worse for the occupants when failed experiments escape from the basement and their lab is attacked by a bomb-happy femme fatale named Val.

Now in its fourth decade, the Atlanta Film Festival—one of only two-dozen Academy Award® qualifying festivals in the U.S.—is the area’s preeminent celebration of cinema.  The Atlanta Film Festival is one of the largest and longest-running festival in the country, welcoming an audience of nearly 25,000 to discover hundreds of new independent, international, animated, documentary, and short films, selected from 3000+ submissions from all over the world.

Atlanta-based Big World Pictures was formed to create unique films for genre fans. Shooting on film has been a binding force for the group who has distributed its films worldwide.  For more information, please visit www.bigworldpictures.us and follow Big World Pictures’ latest film at https://www.facebook.com/frankensteincreatedbikers.