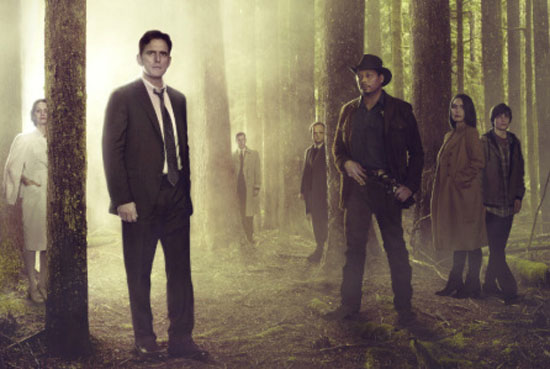 Fox has released a trailer for ‘Wayward Pines’, it’s upcoming 10 episode psychological thriller mini series, based on the best-selling novel by Blake Crouch.  Airing in 125 countries in a global debut, the series tells the story of a Secret Service Agent, played by Matt Dillon, on the hunt for two missing federal agent in the town of Wayward Pines in Idaho. No one is allowed to leave the strange Stepford village of the damned town and the citizens live in terror of the people in charge, who control them and order them to commit murder via phone.  Terrance Howard (Empire) is cast as the town sheriff, Toby Jones is the head of a mental hospital in the town, Carla Gugino plays one of the missing agents, and Shannyn Sossamon plays Burke’s wife. Reed Diamond, Tim Griffin, Juliette Lewis, Charlie Tahan, Melissa Leo, and Siobhan Fallon Hogan are also cast in the series. M. Night Shyamalan, Donald De Line, Chad Hodge and Ashwin Rajan are executive producers for the series.  ‘Wayward Pines’ is airing Thursday May 14 and at 9 PM. You can view the trailer below.