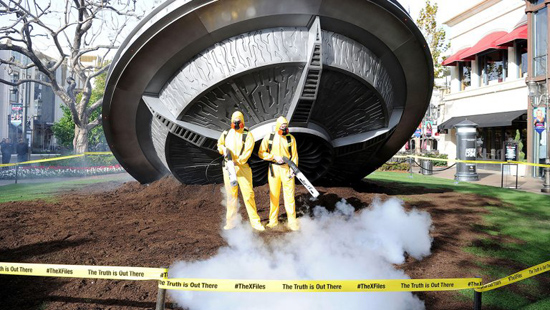 Fox Drops 17-foot UFO on L.A. for ‘The X-Files’ Return, Plus New Clips

In preparation for ‘The X-Files’ premiere on Sunday, Fox has dropped a 17-foot-tall flying saucer in the middle of a heavily trafficked Los Angeles mall.  People in hazmat suits accompany it, blasting a  fog of CO2 on the soil for the massive photo op that measures 26 feet wide, 12 feet long and 17 feet high.

Fox Broadcasting EVP and CMO Angela Courtin said, “Obviously, coming after the NFC Championship Game on Sunday night, we’re going to have a huge lead-in. “But this has been about building a really strong strategy that resembles more of a political campaign. You shore up your base. You go find your fans. You bring them to the table, offer them content they want to share so they do some of the heavy lifting.”

At the Friday screening ‘X-Files’ Chris Carter spoke about marketing not being an issue for the reboot, as it was for the 2008 film. He said, “Everything, including this, is a breath of fresh air. “I was asked if I would come to a marketing meeting very early on. I thought it would be, you know, 10 people. It was 50 people.”

Courtin added, “We want to continue to find ways to connect the online and offline experience. Crashing a UFO at The Grove, while obviously very geographically central to LA, that is going to proliferate on the social sphere.”

Fox has also been releasing clips from the new series on Youtube. You can view a few of them below.    ‘The X-Files’ returns   Sunday, Jan. 24, 2016 at 10  PM   following the NFC CHAMPIONSHIP GAME.

Scully asks to have her samples retested.

Mulder returns to see Walter and review the X-Files.

“Thirteen years after the original series run, the next mind-bending chapter of THE X-FILES is a thrilling, six-episode event series from creator/executive producer Chris Carter, with stars David Duchovny and Gillian Anderson re-inhabiting their roles as iconic FBI Agents FOX MULDER and DANA SCULLY. Mitch Pileggi also returns as FBI ASST. DIR. WALTER SKINNER, Mulder and Scully’s boss, who walks a fine line between loyalty to these investigators and accountability to his superiors. This marks the momentous return of the Emmy- and Golden Globe Award-winning pop culture phenomenon, which remains one of the longest-running sci-fi series in network television history. THE X-FILES debuts with a special two-night event beginning Sunday, Jan. 24, 2016 (10:00-11:00 PM ET/7:00-8:00 PM PT), following the NFC CHAMPIONSHIP GAME, and continuing with its time period premiere on Monday, Jan. 25 (8:00-9:00 PM ET/PT). The upcoming event series will encompass a mixture of stand-alone episodes and those that further the original show’s seminal mythology. In the opening episode, Mulder and Scully take on a case of a possible alien abductee. The all-new episodes will feature appearances by guest stars, including Joel McHale (“Community”), Robbie Amell (“The Flash”), Lauren Ambrose (“Dig,” “Six Feet Under”), Annabeth Gish (“The Bridge”), Annet Mahendru (“The Americans”), Rhys Darby (“Flight of the Conchords”), Kumail Nanjiani (“Silicon Valley”) and William B. Davis, who reprises his role as “Cigarette Smoking Man.” Three of the episodes are written and directed by Chris Carter, with the remaining new episodes written and directed by original series veterans Glen Morgan, Darin Morgan and James Wong.”