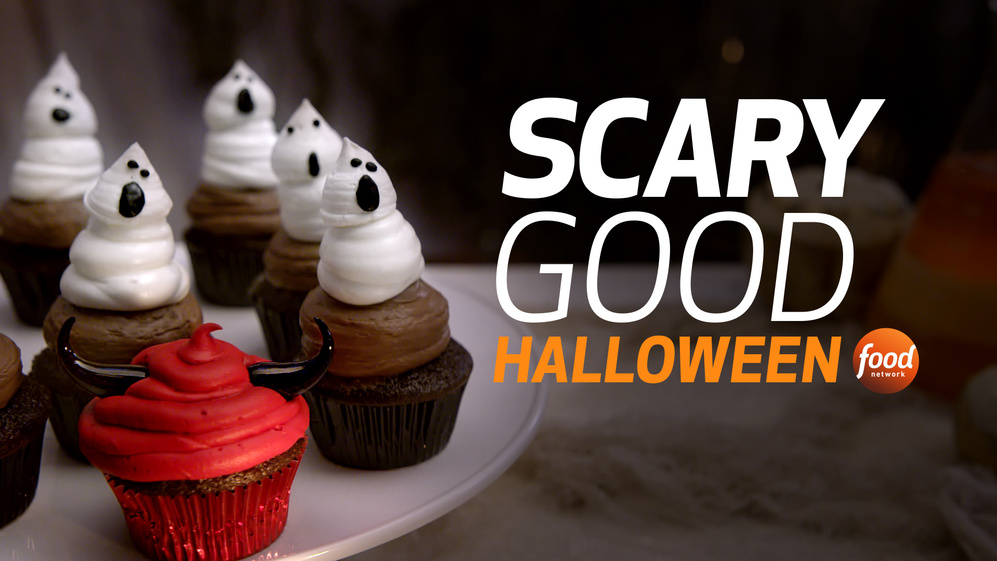 If you love Halloween and all of the sweet treats associated with every horror fan’s favorite holiday,  Food Network and Cooking Channel have over 30 hours of Halloween-themed programming this September and October.   And according to the official press release, the spooky, tasty line-up includes “…four new series and specials, four returning seasonal stunts, as well as specially-themed episodes in nine recurring series giving viewers even more Halloween frights and bites than last year.  Featuring everything from expert pumpkin carvers to sugar artists to creative bakers, all with extraordinary skills and incredible imaginations, there is something for everyone this Halloween season.”

Courtney White, President of Food Network and Cooking Channel, knew he had to increase Halloween-themed programming this year because “With Halloween Baking Championship and Halloween Wars both seeing series-high ratings last year, we knew we had to deliver even more tricks and treats this holiday season, upping the ante across both networks.”

The flagship program for terrifyingly delicious baked goods on Food Network, Halloween Baking Championship, will once again feature Judges Carla Hall and Zac Young, along with new judge Katie Lee, and host Henson, as eight contestants “… show off their skills over six episodes with terrifyingly delicious challenges. From skeleton desserts to monster madness, only one baker can frighten the competition for a chance to win the $25,000 grand prize and to be featured in Food Network Magazine. Fans that can’t get enough of the scary competition, go behind the scenes with the digital companion series, Halloween Baking Championship: Extra Sweet. Spend a day with the judges as they are transformed into otherworldly creatures, and watch the crew build the sets and prep the pantry for the season’s creations.”

Ace of Cakes Goldman continues the competitive “spirits” as the host of new series Halloween Cake-Off, where “…four professional bakers from around the country compete in unconventional baking and design challenges where flavor is only the tip of the icing.  In this four-episode stunt, the bakers are tested to find out who is best at making the creepiest and most innovative Halloween cakes that must also transform in mystifying ways. From haunted and cursed cakes to dead and living creations, the competitor who wows judges Duff Goldman, Dan Langan and Waylynn Lucas with the most over-the-top edible work of art will be crowned winner of Halloween Cake-Off and earn the $10,000 grand prize.”

Goldman and co-host Bertinelli will also get the younger trick or treaters in on the act with a special episode of Kids Baking Championship: Tricks & Treats, featuring the return of four previous contestants as they attempt “…to create the spookiest spider web desserts, but only one junior baker will rise to the top and take home the ultimate baker’s dream prize of baking equipment and supplies.”

If a team competition is more of your bag of candy corn, pumpkin carvers, cake masters, and sugar artists will compete in the new season of Halloween Wars.  Bennett returns as host to “oversee(s) all the thrills and chills as six teams each made up of an expert pumpkin carver, a cake artist and a sugar master battle it out over five episodes to create frighteningly fun Halloween-themed edible displays that are as scary as they are delicious. Their creations are judged by award-winning cake decorator Shinmin Li, horror film special effects master Todd Tucker, and a rotating panel of celebrity guest judges, including Colman Domingo (Fear the Walking Dead), Caleb McLaughlin (Stranger Things), Jackson Rathbone (Twilight saga), Harley Quinn Smith (Tusk), and Elvira: Mistress of the Dark! The last team standing takes home a grand prize of $50,000.”

Haunted Gingerbread Showdown also returns this year as host Kelly and nine gingerbread artists battle to create “…displays so spooky they will cause nightmares.”  Judges include Jamika Pessoa, Gesine Prado and fashion plate Jason Smith, who will determine which artists will advance to the finale for a stab at $25,000 and a future feature in Food Network Magazine.

Two new specials, Outrageous Pumpkins (hosted by Webb and featuring “… three rounds of challenges these spectacularly talented artists use carving and sculpting tools ranging from toothpicks to saws to execute their amazingly intricate Halloween designs”) and the Cooking Channel’s Freakshow Cakes (co-hosted by Young and Vivian Chan, as “…three of the most sinister cake artists step into a side-show tent to whip up the freakiest cakes imaginable”) also join the packed line-up this Halloween season.