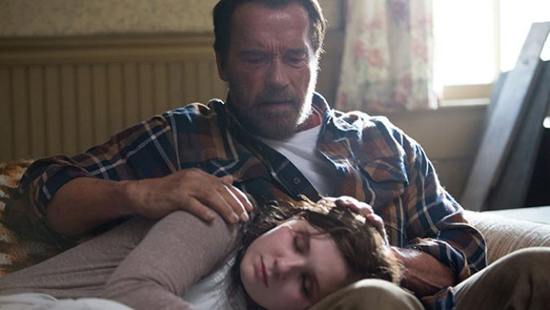 The first trailer for the the zombie film ‘Maggie’ has been released. The apocalyptic thriller stars Arnold Schwarzenegger and Abigail Breslin. Scripted by John Scott 3, the story centers around a teen from the Midwest that has been infected with a disease that will turn her into a cannibalistic zombie and the father who stays by her side though the ordeal. The film was originally scheduled to premiere last year in Toronto, however Lionsgate bought the rights first. ‘Maggie’ will debut next month at Tribeca.

Schwarzenegger posted the trailer for the film on Facebook and said, “I’m really proud of my new film, Maggie. This is the most human zombie film you’ve ever seen, and it’s the most human role you’ve ever seen me take on. My co-star, Abigail Breslin, is absolutely incredible in the title role, and our director, Henry Hobson, made a beautiful film.”