The first trailer for the upcoming horror film from Glass Eye Pix titled Depraved has been unleashed by the studio.  In an exclusive post, Indiewire has unveiled the 34 second spot which combines the eerie imagery one would expect from a modern-day re-imagining of Frankenstein with the jump-cuts so popular with the horror genre.  With this being the 200th anniversary of the Mary Shelley literary classic’s release (a year or two off, but who’s counting?), the timing is perfect for the iconic monster to make its triumphant return.  And where better than in Brooklyn?

In the film, a man (Owen Campbell) awakens after a brutal attack in the borough to find that he’s inhabiting a body he doesn’t recognize.  It turns out that the modern-day Dr. Frankenstein, Henry (David Call), has planted his brain in the body of someone else (Alex Breaux) in a twisted act of medical curiosity and terror.  Along with his accomplice Polidori (Joshua Leonard), Henry makes a critical error when the true origin of the creature is presented to the man they’ve manipulated and a path of destruction and carnage ensues.  While the central plot is very familiar, the trailer makes it clear that this version will be anything but.

For horror fans, a key part of this project is the long-awaited return of an indy horror legend.  After five years, Larry Fessenden returns to the director’s chair (his last such role coming in 2014 with a segment featured in The ABC’s of Death 2.)  The beloved staple of the independent film scene also wrote and produced Depraved, a daunting challenge that the prolific Fessenden seemed up to taking on.  Joe Swanberg, writer/director of the Netflix series Easy, co-produced the project.

Depraved will make its world premiere at the IFC Center’s ‘What the Fest?!’ film festival on opening night (March 21st.)  There is already a palpable buzz around the film ahead of its debut in New York, with an IFC press release labeling it a “meditative re-imagining of the novel.”  View the trailer to make a determination for yourself, but it certainly does look like a visually-acceptable and suspense-filled take on the horror classic.

Keep it tuned to HNN for more news on Depraved as it breaks! 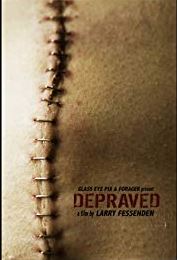