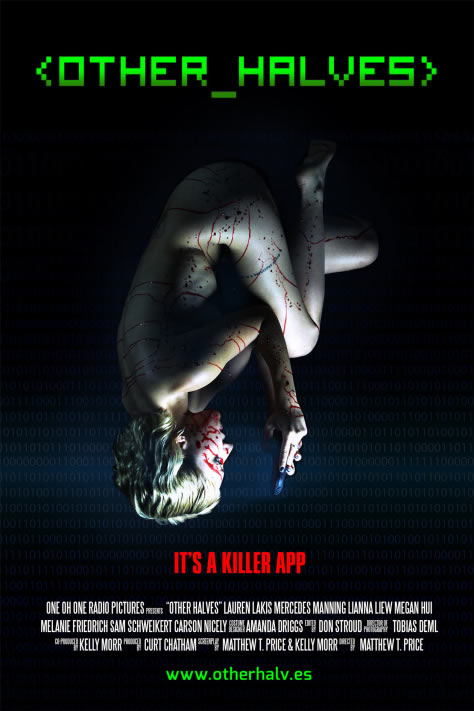 First Poster Revealed for ‘Other Halves’

Other Halves, a new high tech horror film set in the world of Bay Area tech startups, begins filming at Hack Reactor in San Francisco starting in January. The project, from One Oh One Radio Pictures, is the feature film debut for director and co-writer Matthew T. Price, and co-writer Kelly Morr.

The film stars Lauren Lakis (Hybrids, Gun Woman) and Mercedes Manning (Strictly Sexual, Zipper) as programmers who develop a revolutionary new dating app called Other Halves. On the night before the app is set to launch, they discover it causes strange side effects: users lose all self-control, becoming amoral, lascivious, violent… evil. They consider shutting the app down, but…

“This whole thing started when I was shooting a promo video for my friends at Hack Reactor [a coding school],” says director Matthew Price. “Coders are fun, interesting people to hang out with but they’re also driven and passionate about their work. A tech startup seemed like the perfect place to set an intense thriller.”

“Tech startups are traditionally masculine spaces,” says writer Kelly Morr. “We’ve written a story about a team of coders that is predominantly female. We want to challenge convention while still creating a film that is true to the entrepreneurial spirit of Silicon Valley. And, of course, we included all the fun and scares of a traditional horror film! It’s been really invigorating to work in the Bay Area–people here are very enthusiastic about a project that is so uniquely NorCal.”