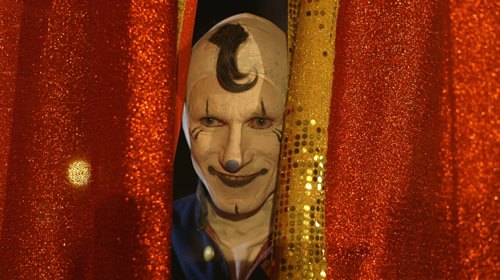 Five Images Released for Circus of The Dead

Actor Bill Oberst Jr.  (Children of Sorrow) has recently wrapped a lead role as a necrophiliac clown in Circus of the Dead. Several early stills from the film have been released of Oberst Jr. and others, courtesy of director Billy Pon. The film’s story involves a deadly circus and a group of sadistic clowns; these clowns want to play some games, with those they have captured. Circus of the Dead also stars Parrish Randall (Gut Instincts), Brad Potts (Puppet Master X: Axis Rising), Chanel Ryan, Ryan Clapp, Rusty Edwards and Mike Williams. This title is currently in post-production and horror fans can preview several bloody stills, here.

Actor Oberst Jr. has something to say about his character Papa Corn. Oberst Jr. describes Corn as “a homicidal serial rapist with a taste for necrophilia. His day job happens to be as a circus clown. He and his highly-disturbed fellow clowns use the circus as cover for some of the darkest and most graphic acts of violence I have ever seen in a script or on set.” Circus of the Dead is full out gory horror! Oberst Jr. also promises brutality, from Corn: “the effects team, led by Marcus Koch and Matthew Ash, has been churning out corpses and body parts non-stop for the entire 5-week shoot.” This film will satisfy even the most experienced gorehounds.

Circus of the Dead will also shock fans, in just a few months. Oberst Jr. gives fans a behind-the-scenes account of the shoot “we’ve sawed off heads, hands and tongues; we have stripped the skin off a living man’s face, drooled clown slime on multiple females in varying states of undress and I have chased a stark naked woman through a parking garage, with a real cattle prod!” Circus of the Dead charts new horror territory in 2014!