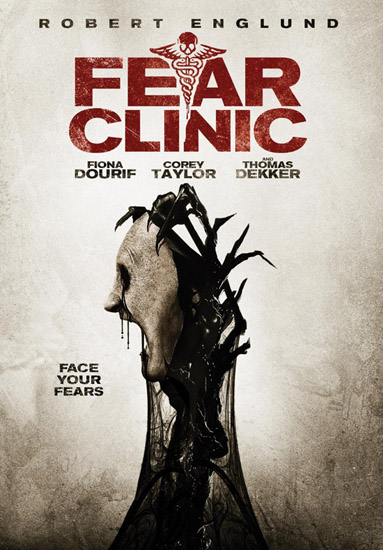 Synopsis: A doctor works to cure patients suffering from crippling phobias by placing them inside his invention which induces and controls hallucinations.

Our Thoughts: ‘Fear Clinic’ is an awesomely twisted new psychological horror film, with a supernatural twist. Based on the web series of the same name, Robert Englund stars as Dr. Andover, a doctor who invented  “Fear Chambers” in order to help clients with various phobias by confronting them in controlled hallucinations. A woman named Sara, along with a few others who survived the same attack by a shooter inside a diner, and had treatment at the Fear Clinic, return to see Dr. Andover for further help when their phobias come back worse than ever. Andover has a strange vision when he comes in contact with unexplained black vomit from returning patient Calyee, and realizes that a sinister entity has been awakened as a result of his work.

‘Fear Clinic’ is a very layered film. With unexpected twists and turns, I found myself fully immersed in the story. It seamlessly blends psychological thriller and supernatural horror. The special effects were incredible and extremely creepy. At times it very much reminded me of John Carpenter’s ‘The Thing’. The spider scenes especially stuck with me, and it will be awhile before I get some of those images out of my head. The soundtrack for the film also stood out, and not just because it features Slip Knot’s Cory Taylor, who co-stars in the film. The latter half of the movie very effectively used it’s backing score, and flash back sequences, in a way reminiscent of ‘Saw’, which created a dramatic conclusion to the film.

All of the acting in the film was excellent and there were several stand out performances. Fiona Dourif gives an amazing performance as the terrified Sara. Thomas Dekker does an incredible job as the brain-damaged Blake. Robert Englund was great as always, and gives a very thoughtful performance as Dr. Andover. In addition, Angelina Armani, who plays Caylee; Cleopatra Coleman, who plays Megan; and Corey Taylor who played Bauer, all gave outstanding performances.

Overall I found the film to be a very creative blend of horror genres and terrifying imagery that left me with a lasting impression of  “fear”. Robert Englund and horror fans alike will not want to miss the terrifyingly imaginative ‘Fear Clinic’.