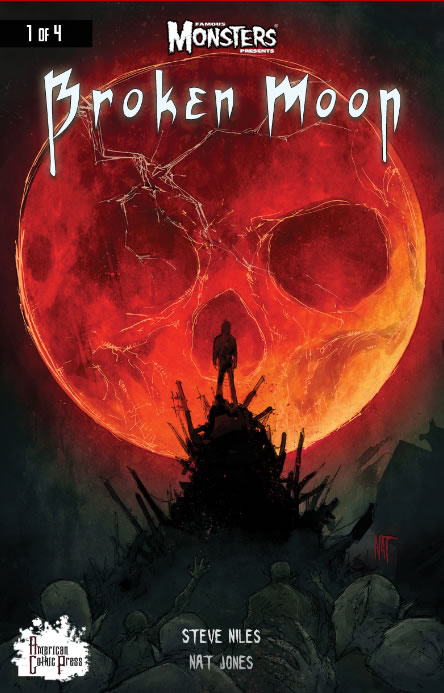 Famous Monsters, the world’s longest-running entertainment fan magazine (est. 1958), announces that in 2015 it will expand its publishing division into original comic books.

Far from being a departure, comics have long been a part of FM’s history. In the 60s and 70s, the magazine shared the Warren imprint alongisde several monumentally influential black and white imprints: CREEPY, EERIE, and founding FM Editor Forrest J Ackerman’s very own VAMPIRELLA. In recent years, FM has dedicated multiple pages of every issue to articles about current comic book creators and their projects. The comic medium is naturally conducive to Sci-Fi, fantasy, horror, and all the themes that Famous Monsters prides itself in covering. By publishing original comics, FM is returning to its very roots.

“It has been a fun and successful seven years of covering some amazing talent while relaunching Famous Monsters back into the mainstream,” says FM Publisher Philip Kim. “But I remembered something equally exciting that Forrest Ackerman penned: his own stories. Though we celebrate all Famous Monsters, we are itching to make new ones. It’s time to tell our own stories again.”

This new comic book division, American Gothic Press, has an expansive slate to kick off in 2015, featuring such reknowned creators as Steve Niles, Paul Tobin, Nat Jones, Darick Robertson, and many more. The first series, set to debut in June, will be GUNSUITS, written by the Eisner-winning Paul Tobin (BANDETTE, COLDER), with art and cover by P.J. Holden (JUDGE DREDD, NUMBERCRUNCHER) and an alternate cover by Darick Robertson (TRANSMETROPOLITAN, HAPPY!). “When I was growing up, the only place I could grab a copy of Famous Monsters was at the comic store,” says Tobin. “They didn’t have them at the grocery store where I bought my Creepy magazine, and Eerie, and Savage Sword of Conan. For Famous Monsters, I needed a long drive to a neighboring city, where painted covers by Basil Gogos were waiting. His monsters always seemed to have secrets. Now, years later, I get to be one of the writers making those secrets, and it’s great fun.”

Coming in July will be BORNHOME, also scripted by Tobin and pencilled by Jeff Johnson (GREEN LANTERN, X-O MANOWAR) in the Cosmic Sci-Fi style of DRIFTER and BLACK SCIENCE. August will bring BROKEN MOON by Steve Niles (30 DAYS OF NIGHT, CRIMINAL MACABRE) and Nat Jones (SPAWN, ’68), an apocalyptic tale about creatures of legend and how they have come to control the fate of the world.

This is only the beginning for American Gothic, who have more exciting projects in the pipeline. Here is an exclusive first look at the cover to BROKEN MOON #1 by Nat Jones.