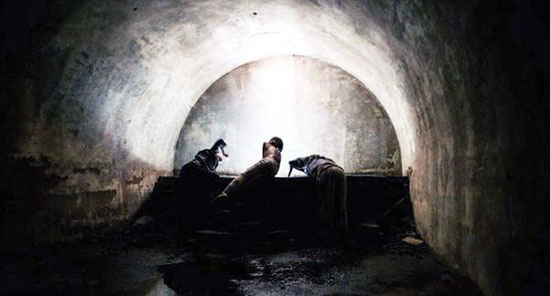 Eytan Rockaway’s THE ABANDONED (previously titled THE CONFINES) will premiere in theaters January 8th. IFC Midnight will be releasing day and date with VOD and Digital as well.

Director Eytan Rockaway makes his feature film directorial debut in this tense thriller that blurs the lines between illness and reality to mirror the traumatized psyche of the protagonist in a story that challenges the power of our own perception.

Take a terrifying plunge into the warped mind of a disturbed young woman. Desperate to get her life back on track, the unstable Streak (Martha Marcy May Marlene’s Louisa Krause) takes a job as a security guard, working the graveyard shift at a once upscale, now abandoned apartment complex. But on her first night on duty, she discovers a horrifying presence lurking deep within the bowels of the decaying building. With her nerves already on edge, Streak must confront demons both real and imagined as she struggles to keep a grip on her sanity. Jason Patric (The Lost Boys) co-stars in this harrowing thrill ride.

The film will premiere in theaters January 8th.