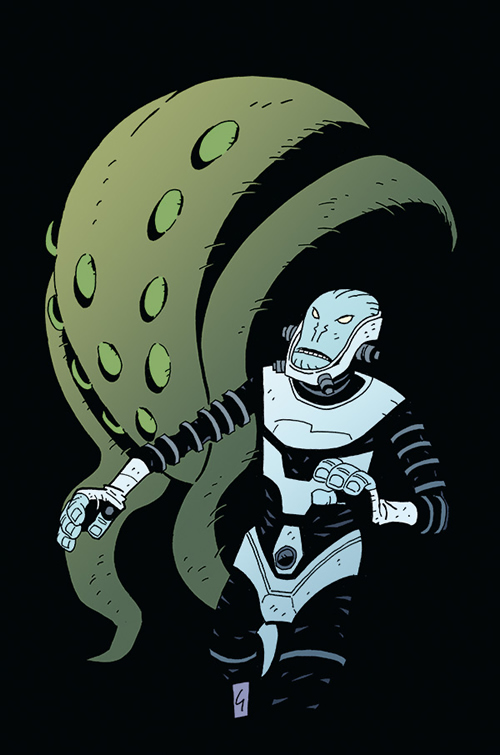 Hitting your local comic store this week is Dark Horse’s The Visitor: How and Why He Stayed.  This new mini -series is the latest spin-off from Mike Mignola’s iconic Hellboy series. At the helm for the series, alongside Mignola and Paul Grist, is Chris Roberson.  Roberson, best known to horror comic fans from iZombie and another “Mignolaverse” favorite, Hellboy and The B.P.R.D., promises to take the Hellboy series in a more “introspective” direction, as we learned when we caught up with him to discuss The Visitor: How and Why He Stayed.

Horror News Network:  So Chris, give us a brief background on this new series, The Visitor: How and Why He Stayed, and its roots that are already seeded in the Hellboy universe?

Chris Roberson: In the first Hellboy miniseries, Seed of Destruction, there is a quick cutaway to a group of aliens on a space station far out in space, monitoring what is happening back on Earth. And a few years later, in the pages of Conquerer Worm, Hellboy and Roger the homunculus meet another one of those aliens, who before dying reveals that he was sent to Earth to kill him the moment that he arrived in 1944, but decided at the last minute to let him live, and that he had been watching Hellboy from a distance for the more than fifty years since. The Visitor: How and Why He Stayed explores the mystery of who that alien assassin was, why he chose to let Hellboy live, and what happened as a result of that decision. 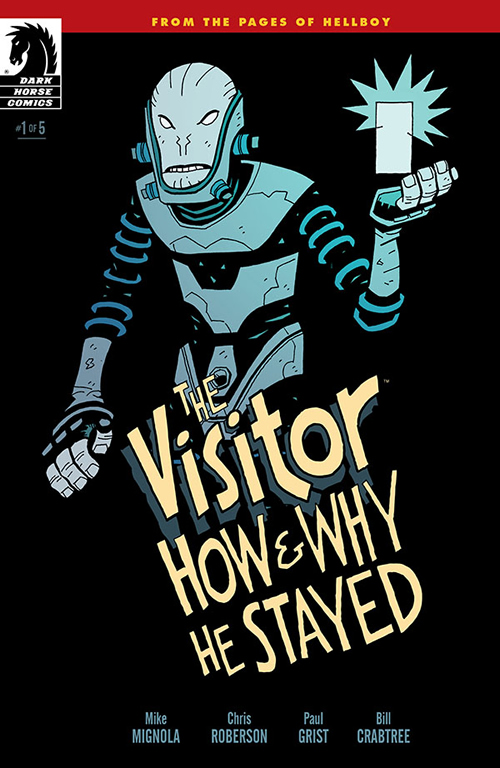 Horror News Network:  This series explores some familiar, yet new territory, and uncovers some characters from Hellboy’s past.  What was it like to be able to run with this story line?

Chris Roberson: When I first started talking about the idea with Mike Mignola and Scott Allie, I was excited about the possibility not only of exploring the story of the mysterious alien from Conqueror Worm, but also the opportunity to take a look at periods in Hellboy’s life that we haven’t seen much of before. I knew that Hellboy must have gone through a “gawky teenager” phase at some point, but we’d never seen it on the page, for example. But that kind of thing was just a bonus, since the main focus of our story is the alien himself, and how he was affected by his years living on Earth.

Horror News Network: You’re obviously very comfortable navigating “Mignolaverse” with your past work on Hellboy and the B.P.R.D, how does work on this series differ?

Chris Roberson:  This story was a little different in that Mike and I decided to cover a lot of territory in the span of just five issues, beginning in 1944 and ending in the 1990s. So, each issue really functions as a stand-alone story, that together combine to form a larger tapestry. And as I said, some of the times and places that we visit are ones that haven’t really been fully explored in the Hellboy and BPRD comics before now, so there was the opportunity to fill in the map a bit more than had been done to this point.

Horror News Network: Mike Mignola is of course a legend, not just in horror comics, but in the comic world as a whole.  You’ve always done an excellent job of taking on his characters, what is the process like working with him, as opposed to working with characters you’ve created?
Chris Roberson:   I’ve always been a big believer in the benefits of collaboration, and one of the real joys of working on the various Hellboy related projects has been getting to collaborate with so many fantastically talented, smart people. Not just Mike, but our editors Scott Allie and Katii O’Brien, and artists like the amazing Paul Grist. I always think of the process that we use as an ongoing conversation, that often starts on the phone with Mike or at lunch with Scott and Katii, and everything from the outline to the scripts to the layouts and finished art is part of that conversation, with different people chiming in with better ideas and suggestions as things go along.

Horror News Network: With The Visitor: How and Why He Stayed, what can horror comic fans expect in terms of action and suspense?

Chris Roberson:   Well, it’s a story set in the world of Hellboy, so of course there will be monsters and demons and cultists and the like. But this story is a little different than most that are set in that world, a little quieter and more introspective, almost elegiac in tone in places. The Visitor himself is an outsider observer in Hellboy’s world at the outset, but as the story progresses he gradually becomes more personally invested in the fate of humanity, and ultimately ends up dealing with issues of grief and loss. Also, there’s a giant armadillo in issue 2.

Horror News Network: In three words describe why comic fans should pick up The Visitor: How and Why He Stayed?

Horror News Network: What else can horror comic fans look forward to from you in 2017?

Chris Roberson:   We’ve got some really cool Hellboy and B.P.R.D storylines in the works, most of which I probably can’t talk too much about yet, and a few other surprises set in that world that will definitely be of interest to fans of Hellboy.

The Visitor, How and Why He stayed hits comic shops on February 22nd. 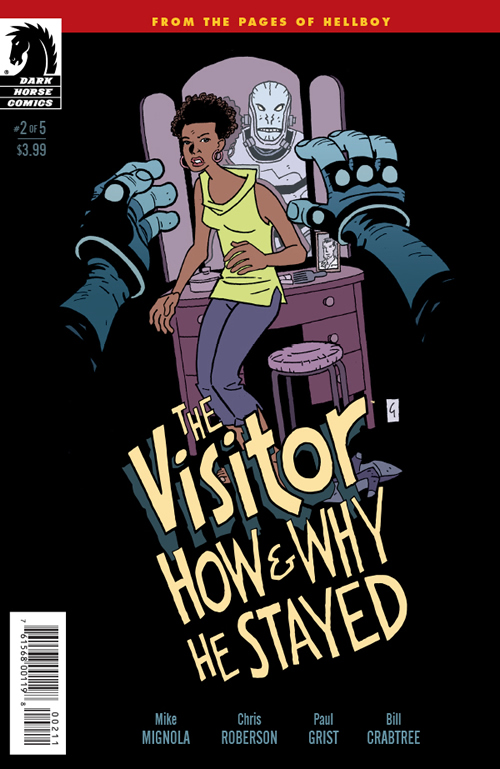 ‘The Visitor’ Trailer Heralds Debut In Theaters, On Epix