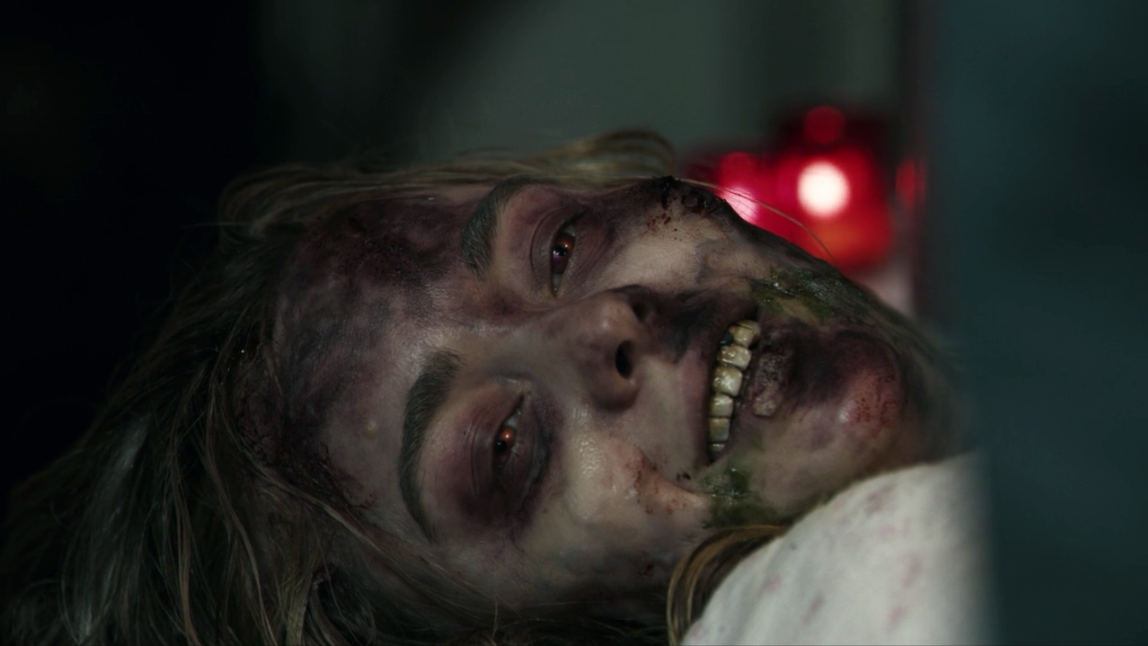 The Exorcist: The Series “The Griefbearers” Episode Review 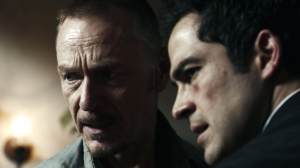 Chapter Eight of Fox’s The Exorcist, entitled “The Griefbearers” continues to prove the series’ reputation as a quality program that takes creative risks to achieve an expert level of horror storytelling. This episode raises the stakes with the ultimate exorcism of Casey Rance (Hannah Kasulka) and the deaths of two important characters… events which will certainly build towards the high stakes climax of this season.

Geena Davis gives her strongest performance of the season in Episode Eight. Three episodes after a major twist revealed that Angela Rance is actually Regan MacNeil of the original 1973 film, the show now provides Davis with more scenes and more material than ever before. Angela now feels much more like a main character, and her internal struggle over how she is in some way responsible for her daughter’s suffering plays out in numerous interesting ways. One particularly effective scene featured Angela seeing her childhood self in the dusty basement of the classic film, speaking to the Captain Howdy who captivated her as a child. An earlier Horror News Network review commented on how a scene depicting Captain Howdy slowly chipping away at Regan as she lets her guard down wouldn’t have felt out of place in the original film. Through a series of surprise events in the series, the viewers actually get to see that scene!Thankfully, it doesn’t disappoint. Robert Emmet Lunney is creepier than ever before with his bright red and white satin clothing, shoulder bird, and grey nail polish. His interactions with adult Angela and child Regan are perverse and manipulative. It is interesting that his technique seems to be tailored to each individual person he 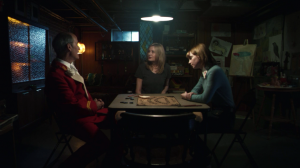 meets. His early encounters with Casey were grossly charming. His early interactions with Regan were creepily childlike. With Angela, he is confrontational and direct. It is clear that the fact that Captain Howdy has been waiting for Angela for over 40 years makes him just as eager to get to her as she is to free her child of this pain.

The exorcism of Casey is a major portion of this episode. The filmmakers do a fantastic job of mixing some of the classic tropes of exorcism filmmaking with new and interesting twists. Chairs eerily hover in the air before crashing to the ground. And the floating body scene is accompanied by an interesting twist involving the priests reciting last rites for the demon. Another fine touch is the fight that breaks out between Alfonso Herrera’s Father Tomas and Ben Daniels’ Father Marcus before they are able to realize that the demon is getting inside of their heads and causing the strife.

The music of the show has always been captivating, but it was used exceptionally well in this episode. Some moments were chillingly quiet and reflective, while other scenes featured clanging symbols and uncanny dissonance in the background of the scenes. I’m glad the show got “Tubular Bells” out of the way in the pilot episode and has since set out to forge a new path for its score. From the opening credits to the score which accompanies every scene, it’s clear that the music of the show has been selected and composed with care and purpose. 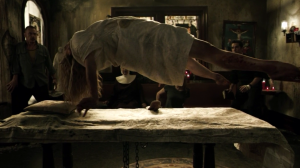 The show isn’t afraid of losing characters in order to progress the story with purpose. Sharon Gless’ Chris MacNeil leaves us way too soon in this episode, and Kurt Egyiawan’s Father Bennett bows out of the series after kicking serious butt last episode. The deaths of both characters does seem a bit premature… their stories could have been explored a lot more in future episodes. With that said, the grim reality is that the finely crafted, slow crawling, sophisticated nature of the show has put it in a position where a second season has not yet been confirmed due to low ratings. If the show is going to conclude soon, these deaths could potentially lead to a more meaningful climax and conclusion of this season (and, possibly, series). Furthermore, if these surprising deaths spark interest in casual viewers who want a little more violent action and a little less thinking in their entertainment (Here’s looking at you, Negan!), I’m all for it so long as the story supports it.

The Exorcist is the finest horror show currently airing on television. “The Griefbearers” ends with another interesting twist that lets viewers know exactly where we’re heading in the final two episodes. If you are not currently watching the show, now is a great time to hop in and witness the final act, now that the slate has been wiped clean in this episode. If you’ve been watching all along, it looks like we’re in for a treat as the franchise begins to come full circle.