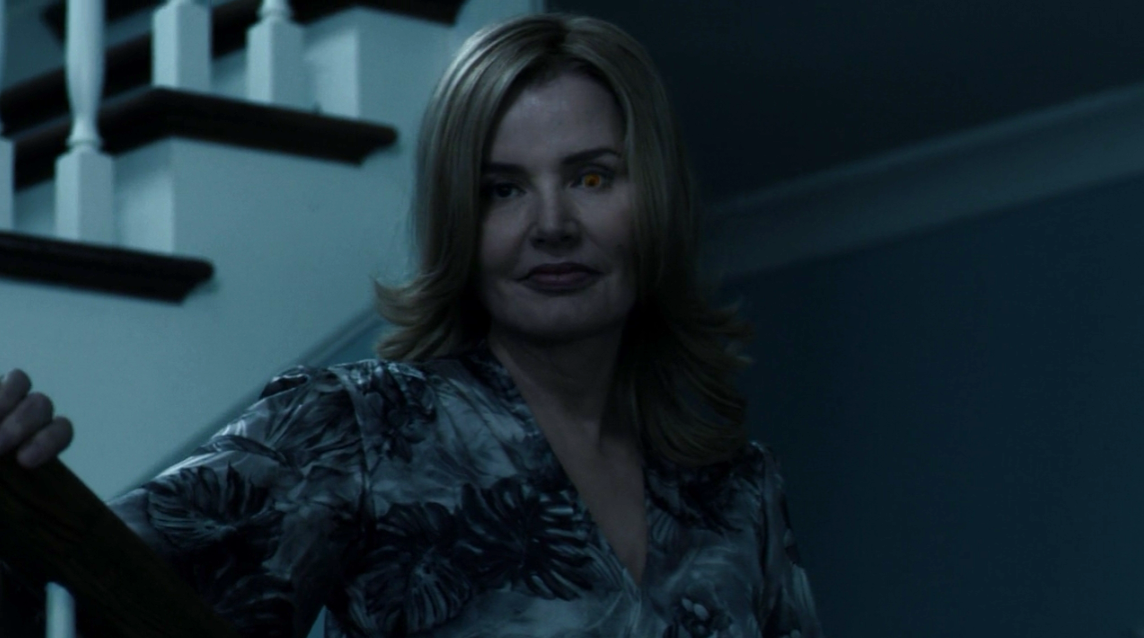 The Exorcist: The Series “162” Episode Review 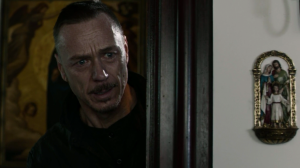 Episode Eight featured the surprising deaths of Father Bennett (Kurt Egyiawan) and Chris MacNeil (Sharon Gless). Episode Nine increases the body count by killing off fan favorites Lester and Cherry Rego (Ken Marks and Keira Naughton), Mother Bernadette (Deanna Dunagan), and the entire Convent of Our Lady of Mercy. While this is an incredible loss of characters who have all contributed towards the unique atmosphere of the show, it’s clear that the showmakers are serious about increasing the odds as the story progresses. Captain Howdy (Robert Emmet Lunney) has achieved integration with Angela Rance (Geena Davis), and there had to be serious consequences for it to mean anything. The expression on Father Marcus’ face as he takes in all of this death says it all: there’s no going back at this point. Anything less would have caused the viewers to seriously question one of the following scenes where Marcus pistol whips and nearly drowns Brother Simon (Francis Guinan). The show seems very aware that it can’t raise the stakes without raising the consequences. Suddenly, none of the cast feel safe anymore. Perhaps this has something to do with the fact that Fox has not yet committed to renewing the series for Season Two. Maybe Jeremy Slater, the show’s creator, doesn’t want to hold back on telling his story in case the first season is all he gets to tell it.

The Rance family is the glue that holds the show together, and all of the characters have great moments in this episode. Casey (Hannah Kasulka) is left extremely fragile and damaged by her possession experience, yet we see her doing all she can to protect her sister, Kat (Brianne Howey) when she begins to discover that something is unusual about her mother. Kat, in turn, is protective and nurturing of her sister, able to identify with what she is feeling because of her own experience after the car accident. In the early dinner scene, Kat has a great moment where she insists on honoring Granda MacNeil while her mother clearly isn’t interested in discussing what happened. Henry (Alan Ruck) has a pretty close call with Angela, and– given the show’s recent propensity towards murder– viewers will certainly sweat through this scene to see if he makes it out alive. Ruck has done a tremendous job this season of portraying a multifaceted fragile and thoughtful man who is struggling to find himself after an accident-related disability. 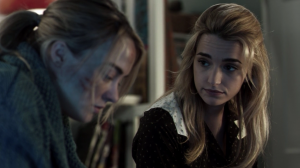 One of the greatest strengths of this show is how it always portrays its characters in three dimensions rather than using stereotypes. Henry Rance isn’t stereotypically defined by his disability. Kat Rance and Father Marcus are not stereotypically defined by their sexual orientations. They are all strong, or smart, or cool, or funny individuals who are all struggling through the same tragic happenings of the supernatural, just like everyone else on the show. The show’s diverse characters all feel so real, which leads to a satisfying viewing experience.

Geena Davis is on fire in this episode! Her performance has always been captivating, but now that she has integrated with the demon, she has become something that viewers might love to hate. After episodes and episodes of being a concerned and overwhelmed mother, Angela Rance is now something altogether different and horrific. Her bond with the demon is so close that she’s even directly referred to as Pazuzu by the evil conspirators (All the show has to do is find a tasteful way to place the original statue into the final episode and my “clever homage bingo card” will be fully stamped!). The fact is, we’re used to seeing some of the evil religious figures committing heinous acts; but when Angela herself executes the Convent of Our Lady of Mercy, I couldn’t help but be shocked by the lengths the show is willing to go. How can Angela come back from this? Even if the good guys are able to separate her from Captain Howdy, could she ever live with herself knowing all of the carnage she’s caused? Casey is currently struggling with the same thoughts post-exorcism, so it will be an interesting dynamic if viewers ever get to see how these two move on after these traumatic events.

But that’s assuming Angela makes it out alive next week! Jeremy Slater has promised that some characters won’t make it to the end of the season (and he’s certainly kept it so far), and Angela’s powers are currently unlike anything we’ve ever seen in the world of The Exorcist. Whatever ends up happening… it’s going to be huge.

Even as Angela’s powers reach such incredible heights, the show sticks to its plan of using clever in camera effects, instead of lazy computer generated imagery, to tell its story. When Casey views the demon touching Kat through Angela’s body, the camera closes in on Lunney’s hands instead of Davis’. When Angela uses her powers to inflict pain or control the bodies of those around her, the effect is achieved solely by the movements of the actors in the scenes. This level of restraint has been one of The Exorcist’s strengths for the past eight episodes, after it ditched some of the CGI gags that could be found in the pilot. 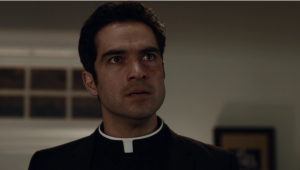 Father Marcus and Father Tomas both have some very engaging moments in this episode. Both give off a certain air of action hero coolness that I never expected to be a part of this show. Somehow, Marcus waving around a pistol as he bursts his way in and attacks Brother Simon just feels natural for his character, and I felt a legitimate sense of relief at the end of the episode when Tomas busts into the Rance’s home just in the nick of time. These priests wouldn’t be out of place in a Quentin Tarantino film! The best part is, their boldness isn’t where their character traits end. Father Marcus has dropped several hints throughout the season about his personal demons and his difficulties with the leadership of the church. Father Tomas has kind of been stuck in a rut with his affair story arch, but the show clearly reveals him to be a gentle soul with an aggressive side that can be coaxed out every now and then. Assuming they both make it to Season Two (Priests don’t have a great survival rate during endings of entries of The Exorcist), their interesting personalities will continue to drive the show in fascinating directions.

No matter what happens, next week promises to be explosive and climactic, with some very real consequences. While the life of the Pope hangs in the balance, we will surely be rooting for the show’s heroes and crossing our fingers that our favorite characters make it out okay. Because we still don’t know if there will be a second season, the episode will certainly feel bittersweet… knowing that this may be our last experience of viewing quality horror programming on television for quite some time. Be sure to watch next week’s episode, and swing by Horror News Network for a final review and analysis of the series as a whole.