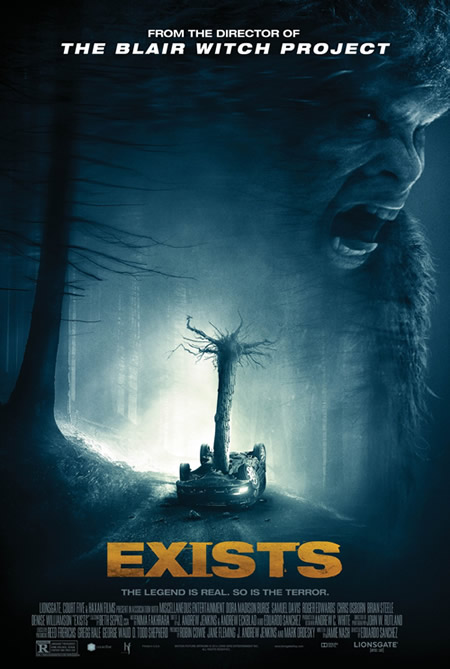 Synopsis: For five friends, it was a chance for a summer getaway- a weekend of camping in the Texas Big Thicket. But visions of a carefree vacation are shattered with an accident on a dark and desolate country road. In the wake of the accident, a bloodcurdling force of nature is unleashed-something not exactly human, but not completely animal- an urban legend come to terrifying life…and seeking murderous revenge.

Our Thoughts: Imagine driving out to your uncle’s cabin for a fun weekend with friends, only to spend the entire time terrorized by a pissed off Sasquatch. This is what new found footage film,”Exists” is about. Exists exceeded all of my expectations for a found footage style film about Big Foot. Using only practical effects, this film is incredibly realistic for a film about a mythological Sasquatch. With a good dose of imagination, Exists shows you exactly what would happen if you were stranded in the woods with a Sasquatch who has a grudge against you.

Rather than a lot of mundane talking and explaining where they are going, this film starts off much faster than most, with a video montage of a group of friends embarking on a trip to the forest. Fast forward to the first night, on their uncle’s cabin, Matt his girlfriend Dora, brother Brian, and friend Todd, with his girlfriend Liz, accidentally hit something with their Jeep. When they get out to check the Jeep, Matt and Brian, hear a strange, not quite human, screaming in the woods. Brian, who is filming the trip, plays back the video of the crash. They see a quick flash of a large harry figure on the screen. Dismissing it as an animal, the group makes their way to the cabin.

Finding the cabin in an unkempt state, the group spends the first night sleeping in the Jeep. During the night they hear more strange non-human sounds. As Brian films, he mentions the fact that their uncle saw something up there. Matt dismisses it, saying he doesn’t believe in that sort of thing. The following day they find a lot of blood and brown hair on the front of the Jeep. While the rest of the group has fun and largely ignores him, Brian explains to the camera that he is there to try and get the elusive Big Foot on film. Brain finally catches another glimpse of it on camera, although his brother and friends still don’t believe him.

The guys play a prank on Brian while he’s waiting patiently for an appearance by Big Foot, only to be chased after by the real monster! Shocked and scared, the guys run back to the cabin, locking the door behind them. We see the creature climbing up the front steps of the cabin on cameras set up by Brain. Just when they think it’s gone, Big Foot roars at the window, directly into the camera. The group shrieks in terror as the creature runs off into the night. Seconds later, they hear a lot of glass shattering and sounds of  the Sasquatch destroying something. At day break, the group sets out to check on their Jeep, finding it with a massive tree branch throw the window and completely destroyed. Panicking, brother Brian and Matt reveal that no one knew they were at the cabin. The group spends the rest of the film trying to get out the woods without being killed by Big Foot.

We see only glimpses of the creature for most of the film. However, when we do finally see more it is incredibly well done. The film does a great job of building terror and suspense, leaving the viewer on the edge of their seat wondering what is going to happen next. Though there is an aspect of predictability to the film, I was still amazed to see how the story unfolded. All of the actors did great jobs portraying people terrorized by a Sasquatch, with Dora Madison Burge, who plays Matt’s girlfriend Dora, giving the strongest performance of the film. Exists is a must see horror film for 2014!