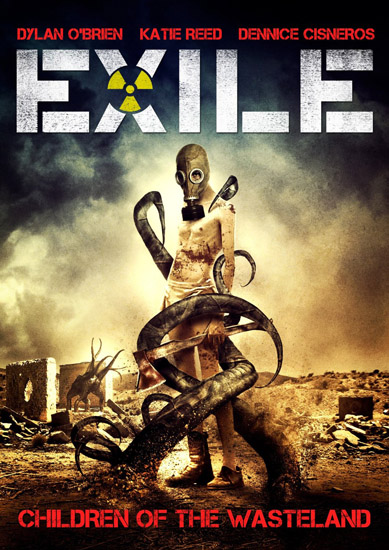 Synopsis: After an alien saves his life, a rebellious teenager tries to become a part of the strange society that killed his mother.

Our Thoughts: ‘Exile’ tells the bizarre story of a world taken over by alien creatures that possess the adults, and subject the youth to their new laws and extreme punishments. They are left with only two choices, either be ‘blessed’ or ‘fall’.

‘Exile’ is an extremely unpredictable sci-fi horror film, centered around a teenager who is inspired to become ‘blessed’ after he dies and is saved by an alien. A touch of ‘Invasion of the Body Snatchers’, with a gory dash of ‘The Thing’, ‘Exile’ is reminiscent of a handful of sci-fi horror films, however, it forges it’s own post-apocalyptic path. The result is an incredibly disturbing and terrifying tale that is impossible to forget.

Indie horror is often hit or miss, and I often don’t know what to expect, but I was quite impressed with ‘Exile’. From the bizarre story, to tthe eccentric, damaged characters, the film is truly something original and unexpected. Low budget effects are used to the utmost effectiveness and the practical gore effects are wonderfully grotesque.