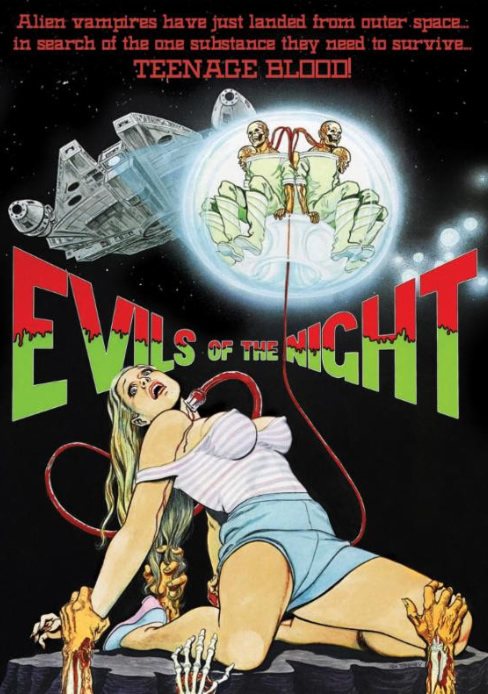 ‘Evils of the Night’ Coming to DVD on October 14th

MPI’s Gorgon Video’s DVD release of EVILS OF THE NIGHT is coming on October 14, 2014.

Full of sex, lasers, synth-pop, feathered hair, bikinis and axe wounds, EVILS OF THE NIGHT is a pivotal example of Reagan-era teen fantasy fodder. Genre favorites John Carradine, Julie Newmar (TV’s Catwoman) and Tina Louise (Gilligan’s Island) star as a gang of alien scientists who want the life-giving blood supply of horny teens camping out near their secret lab. Veteran Hollywood stars Aldo Ray and Neville Brand (in his final film role) play a pair of bumbling mechanics hired by the extraterrestrials to kidnap the teens for experimentation – with botched and bloody results. Co-starring adult film legends Amber Lynn and Crystal Breeze, and directed by Mardi Rustam (producer of The Psychic Killer and Tobe Hooper’s Eaten Alive), this 1985 sci-fi horror classic features some of the most gruesome special effects ever put on film. Gorgon Video’s release marks the long-awaited DVD debut of EVILS OF THE NIGHT.