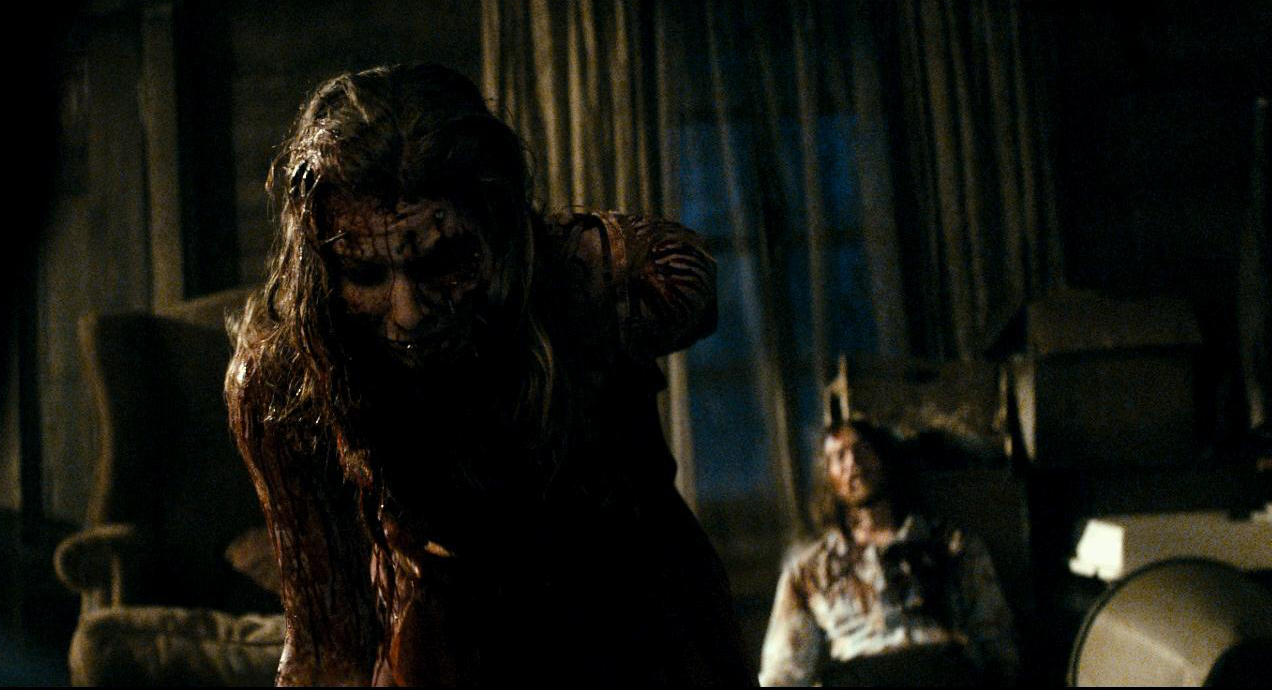 1981’s The Evil Dead is one of my favorite movies of all time. The mix of brutality and campiness in the classic is one that Hollywood has been trying to match for years and for the most part, they have failed miserably. The reason that this re-telling of Evil Dead works is because it does not try to live up to the original; this is a different movie, folks. Sure writer/director Fede Alvarez used some plot points but what he thankfully didn’t do was try to elaborate on the original (a la Rob Zombie’s Halloween).

Evil Dead starts off with a bang. And by bang I mean lots of blood, cursing and a gaggle of rejects from Tod Browning’s Freaks all huddled in a basement trying to burn a seemingly possessed girl at the stake. The story then cuts to five young people headed to a cabin just like the original. The difference here is that the writers wisely made the choice to have this outing mean something more; it’s an intervention for a girl named Mia. Well, it’s more than an intervention really as the group (which includes her long-lost brother) plans for her to go cold turkey that weekend and they all make a pact not to let her leave the cabin. Why this works so well is because it will allow the group to dismiss the horrors that Mia will be seeing. It will allow them to think that it’s a part of the withdrawals that she is going through, they will even mention that she may be making stuff up to try and get the group to take her away so she can give up on the detox.

As they enter the cabin, Mia keeps mentioning that something in the cabin smells like a rotting corpse. No one believes her, of course but eventually they discover the floor entrance to the room beneath the cabin and they see that there are a bunch of cat carcasses strung up to the ceiling. As the kids are looking around, we realize that this is the same basement that we saw at the beginning. This is also where the nerdy college guy finds the Book of the Dead.

I feel no shame in telling you that I then spent the next half hour wanting to punch this guy in the face. Why? Because if you find a book, wrapped in a bag that is then wrapped tightly in barbed wire, you leave it alone. If curiosity gets the better of you and you feel the need to cut through the barbed wire and tear open the bag and you find that the cover of the book is made from human flesh, you leave it alone. Now, if you still can’t put it down and you open the flesh-covered book and see drawings of demons and writing saying to close the book and not to read anything from the book, you leave it alone, right? Not this guy. This guy definitely has to read it and he has to read it out loud.

You’ve seen the original so you know what happens after this moron reads from the book, everything goes to hell and it goes quickly. From the time that the shit starts to hit the fan until the end of the movie, we are treated to copious amounts of non-stop bloody carnage. That’s really the only way that I can put it. It’s an intense, insane and gory bummer of a time for the kids in that cabin.

As I was handing out flyers for Horror News Network to people leaving the theater, one kid asked me if I liked it better than the original and the answer to that is an easy “no”. I hope he didn’t think that I meant that I did not like this movie, because I really did. What I meant was that I can’t compare the two. I think that under the watchful eye of Sam Raimi and Bruce Campbell, Fede Alvarez took the bones of the original and made a new movie out of it while still including a few cool nods to the original (keep your eyes open for them). Please don’t expect the humor of the original, don’t look for the Ash hero to save the day and most of all don’t call this a remake; the success of Evil Dead lies in the differences between it and 1981’s The Evil Dead and that’s groovy enough for me.

Oh, and be sure to stick around until after the credits for a nice treat.