The fifth entry in the Evil Dead franchise–Evil Dead Rise—will debut sometime this year on HBO Max. Written and directed by Lee Cronin, the new installment will follow two sisters trying to survive and save their families from demonic creatures.

The History of Evil Dead 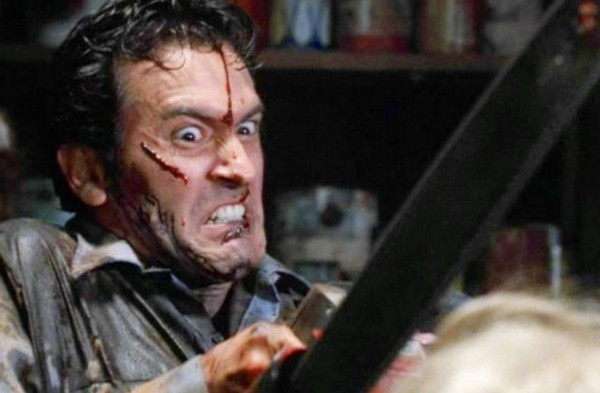 Who would have thought that a relaxing weekend at a cabin could turn into a hellish nightmare? Sam Raimi, Robert Tapert and Bruce Campbell – that’s who.

In 1978, the trio put together a short film in hopes of gaining interest from investors to finance a feature-length movie which would serve as a blueprint for Evil Dead, called Within the Woods. Written and directed by Raimi, Within the Woods was a thirty-minute short starring Bruce Campbell, Ellen Sandweiss, Scott Spiegel and Mary Valenti. The story follows two couples as they head up to a small house in the woods and accidentally disturb an Indian burial ground. The spirts are not happy about this and proceed to do their worst to the group.

Because of Within the Woods, Raimi and company were able to secure funding for a feature length film that would become The Evil Dead. While struggling to find a distributor for their new film, Raimi, Campbell and Tapert would eventually meet Irvin Shapiro, a producer who had a long history in the movie business. Shapiro arranged for the film to be shown at the 35th Cannes Film Festival in 1982. Luckily for the trio, Stephen King was in the crowd and watched in amazement at the bloody gorefest. King even wrote a glowing review of the film in Twilight Zone Magazine calling it “the most ferociously original horror film of 1982.”

Shortly thereafter, The Evil Dead was picked up by New Line Cinema and was released in theaters on April 15th, 1983 (a lot of sources falsely state the release date of October 15th, 1981 but on that date, the film screened at one Detroit theater under the title of Book of the Dead). The film was directed by Sam Raimi with Robert Tapert serving as producer and starred Bruce Campbell as Ash Williams, Richard DeManincor (as Hal Delrich) as Scott, Ellen Sandweiss as Cheryl, Betsy Baker as Linda and Theresa Tilly as Shelly. 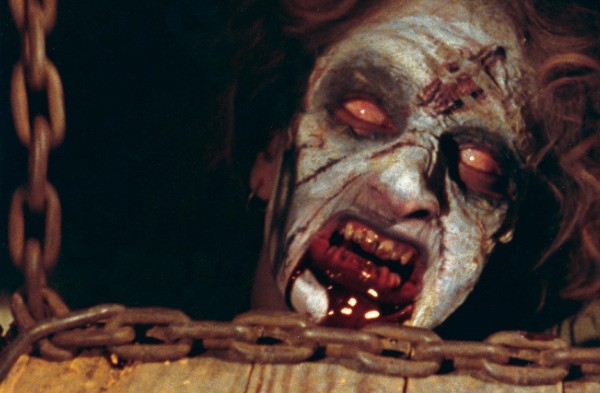 The story follows a group of friends who, while vacationing at a remote cabin, inadvertently release demonic spirits after reading from the Book of the Dead. Those spirits cause the friends to become possessed and turn against one another as the body count rises and the blood splatters.

The Evil Dead has become one of the most beloved horror movie franchises of all time and because of this, the series has spread to other media such as comic books, video games, collectibles and more.

Evil Dead Sequels
Evil Dead II (1987): Ash decides to take his girlfriend, Linda, for a relaxing weekend at a cabin in the woods. What starts out sweet turns sour as Ash discovers and plays an audio tape of an archeologist reading from the Necronomicon, the book of the dead. Shit hits the fan as Linda becomes possessed, Ash chops off her head with a shovel, Ash gets possessed, un-possessed, gets bitten by Linda’s reanimated head, and eventually cuts off his hand with a chainsaw. Whee! After more chaos, the film ends with the Ash, his Oldsmobile and a Deadite being sucked into a portal which eventually places all parties in 1300 A.D. Campbell returns as the lovable horror hero Ash. Joining him in the film are Sarah Berry as Annie, Kassie Wesley as Bobbie Joe, Dan Hicks as Jake, Denise Bixler as Linda and Lou Hancock as Henrietta.

Army of Darkness (1992): The film picks up in 1300 A.D. as Ash goes to battle with Deadites during the medieval era. This movie is remembered for Evil Ash leading the Army of Darkness. As the third film in the Evil Dead trilogy, Army of Darkness tones down the scares and replaces them with plenty of one-liners from the hero. Campbell once again reprises his role as Ash. This time around he is joined by Embeth Davidtz as Sheila, Bridget Fonda as Linda, Marcus Gilbert as Lord Arthur, Ian Abercrombie as Wise Man, Richard Grove as Henry the Red, and Bill Moseley as New Captain of the Army of the Dead.Evil Dead Bruce Campbell

Evil Dead (2013): This updated version of Evil Dead packs a punch with plenty of scares and buckets of blood with no comedy to be found. The film focuses on a drug addict who hopes to get clean by going to a remote cabin in the woods with her brother and friends. Things go horribly wrong once Eric reads finds and starts reading aloud passages from the book of the dead. Look out for nail guns, electric knives and more as blood rains from the sky. Directed by Fede Alvarez, the film starred Jane Levy as Mia Allen, Shiloh Fernandez as David Allen, Lou Taylor Pucci as Eric, Jessica Lucas as Olivia, Elizabeth Blackmore as Natalie and Jim McLarty as Harold. While marketed as a remake, director Fede Alvarez did confirm on Twitter that he considers this a sequel – you be the judge.

Ash vs Evil Dead (2015-2018): The Bruce Campbell-led Evil Dead series returned in full force in Ash vs Evil Dead. The series lasted three strong seasons and followed humanities only hope, Ash, as he battles Deadites in a reluctant quest to save the world. Joining Campbell on the series is Lucy Lawless as Ruby, Ray Santiago as Pablo, Dana DeLorenzo as Kelly, Jill Marie Jones as Amanda, Arielle Carver-O’Neill as Brandy, Ted Raimi as Chet, Lee Majors as Brock and Michelle Hurd as Linda.

Evil Dead Rise (2022 – tentative): While plot details are slim at the moment, Evil Dead Rise is rumored to take place in a high-rise apartment building and feature a female heroine.