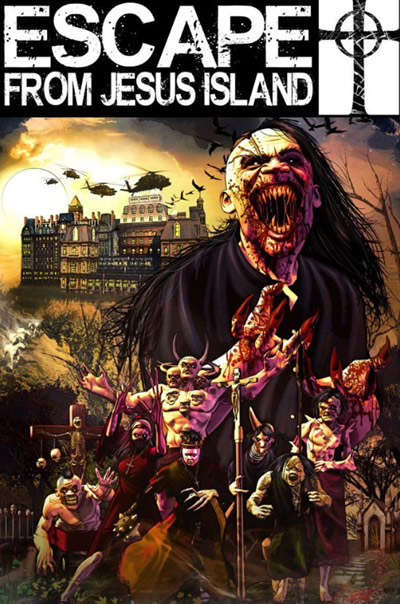 ‘Escape from Jesus Island’ To Be Adapted Into RPG

The Apocalyptic horror comic book series, Escape From Jesus Island, will soon be getting the video game treatment. The Kickstarter-launched series, created by artist Mortimer Glum and writer Shawn French, will be adapted into a turn-based role-playing game in 2015.

EFJI tells the story of an attempt to clone Jesus that goes horribly wrong, unleashing a horde of mutant freaks and kicking into motion the End Times. Despite early backlash, this self-distributed comic is now available in nearly 100 stores in four countries. Next year, it will be available as a game for mobile devices.

Escape From Jesus Island: Rise of the Antichrist will serve as a prequel to the comics and allow players to control the teenage Antichrist, Yeshua, as he comes to power. Alongside a trio of custom-made, cannibalistic mutant freaks, Yeshua will explore the tunnels beneath ReGen Corp’s Malsum Island Research Facility and establish his lair, then make his move to liberate the rest of their mutant brethren from ReGen’s clutches.

“The chance to work with a pro like Eric Pavone on an adaptation is a dream come true,” said writer Shawn French. “I spent an embarrassing number of hours playing the Spider-Man games he made for Playstation 2.”

Pavone adds, “EFJI’s edgy subject matter and brilliant artwork seem to beg for a video game adaptation. When I first spoke with Shawn about the possibility of taking the EFJI franchise into the video game arena, I was amazed at how effortless it was for us to creatively jam on game possibilities. We quickly formed a sort of creative hivemind, made possible in large part by Shawn’s lifelong passion for tabletop and video games.”