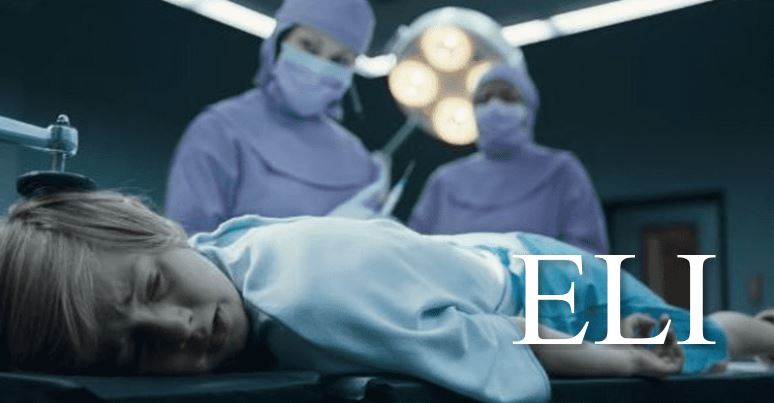 Back in the 70’s and 80’s “made-for tv” movies were all the rage and one that I will always remember was 1976’s The Boy in the Plastic Bubble starring John Travolta as Tod Lubitch, a boy born with a deficient immune system which prevented him from doing anything in the open air. As the title suggests, he had to basically live in a bubble; a sterile, hermetically sealed, germ-free area specially created for him so that he wouldn’t be exposed to the bacterias and virus’ that a normal immune system could fight off – the main character in Eli (named Eli), has the same thing.

Eli starts off with a dream sequence of an “all-American”-type blonde boy happily running through a sunlit field of tall grass before being overcome with breathing problems and collapsing to the ground with red, blistering skin. The boy, Eli, then awakens in his “plastic bubble” where his mom promises him that the doctor they’re going to see will cure him.

Eli (Charlie Shotwell) arrives at the set from The Haunting of Hill House a makeshift hospital which is also a giant, old mansion with his mom and dad, Rose (Kelly Reilly) and Paul (Max Martini), and is greeted by Dr. Horn (Lili Taylor). Dr. Horn explains to Eli that the house is “clean” and re-assures them that her three-stage process of gene-therapy will cure him. She then sends her two nurses, who are giving Eli the old side-eye, to retrieve the family’s luggage.

Eli never seems at ease as a guest/patient in the giant house/hospital and begins to sense that he is not the only patient there when he’s looking out the window of his room and a patch of fog appears on the window next to him as if someone else was breathing on it. The next morning, before the first treatment, Eli’s folks tell Dr. Horn what happened and she chalks it up to the medicines he’s taking, saying that she’s even had some patients hallucinate with the meds.

At the beginning of the first procedure, the doctor explains to Eli that she’s going to inject the virus into his marrow in attempt to get his body to start producing whatever it is that his immune system doesn’t (look, I’m not a scientist). When he starts counting down to get the meds to put him to sleep, he sees the reflection of what appears to be a burnt boy in the back of a chair in front of him. Then he has a dream that his skin is burning, and the nurses tell him that’s because the medicine is working…but is it a dream?

When Eli awakens back in his room, he hears some projectiles hitting the outside of his window and we’re introduced to Haley (Stranger Things’ Sadie Sink); a girl who claims to visit the patients of this hospital from the outside only because Dr. Horn does not like her. She seems to be vaguely trying to warn Eli of some things but for some reason she doesn’t want to say too much.

Before long, Eli is being tormented by ghosts in the house as he grows more suspicious of the intentions of the doctor and nurses (who really don’t seem to like him); he is also growing suspicious of his parents and is increasingly angry that they don’t believe him about the “ghosts” that they surmise that he is imagining because of the medication.

So now we’ve got two separate stories going on: we started with a sick boy whose parents are trying to seek treatment for him and then we’ve sort of morphed into a “haunted house” story reminiscent of *gasp*, The Haunting of Hill House. And what of the appearances of Haley? She seems a bit strange. While the colliding stories could get a bit confusing, the acting, story and SFX are strong enough to keep the viewer interested and, more importantly, drawn in; the need to see how this ends up outweighs the confusion – even when the story seems like it’s about to just start throwing tired “ghost-story” tropes at us.

But wait, there’s more! Just when we’ve kind of figured out how “Act 1” (sick kid) and “Act 2” (ghost story) are going to wrap up, we’re presented with a shocking “Act 3”; and holy shit, does it come out of nowhere and really blow the entire story up – but not in a bad way! With another director, and maybe another cast, this new twist could have imploded and really screwed the story, but I feel like it worked here. Sometimes a shock/twist ending can feel forced and fake but once this happens in Eli, it kind of pulls the rest of the story together and the other confusing bits all make sense.

Eli premiered on Netflix last week, just in time for Halloween. Give it a watch and see if you agree with me…just remember to hold onto your seats for the finale.