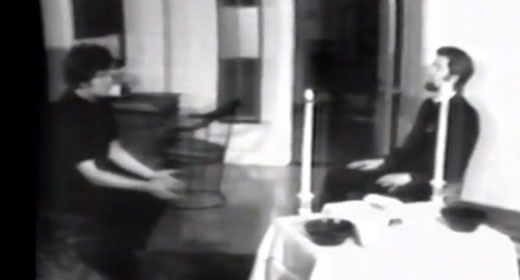 The 1970s is famous for a number of haunted house and possession cases that everyone remembers, from the world famous Amityville Horror to England’s greatest haunting, the Enfield Poltergeist Case.  Many of these “real life” hauntings also received the Hollywood treatment, but up until now, no one ever decided to make a film based on television’s long forgotten first live exorcism, which aired on NBC in 1971.

Not until today that is, as Screen Gems (a company that never turned down a project it didn’t like) is ready to adapt Edwin F. Becker’s recollection of what he reports was an exorcism gone wrong in his book True Haunting.  According to an exclusive report by Deadline, Producer “Cindy Cowan has optioned the book, and will produce with Steve Bersch and Scott Strauss overseeing the project.”

You may remember Cowan from such films as “…Very Bad Things starring Cameron Diaz and Jon Favreau, Red Lights with Robert DeNiro, Scorched starring Woody Harrelson and Dr. T and The Women with Richard Gere.”  Richard D’Ovidio (best known for 2013’s The Call and 2001’s unwatchable William Castle remake Thirteen Ghosts) will be adapting Becker’s novel into a script.

The actual events took place in the Becker Home in Chicago, Illinois. Becker’s book details the case and the fact that the paranormal activity actually became worse after the televised exorcism.  The original investigators on the scene for the NBC report included psychic Joe DeLouise, exorcist Reverend William Derl-Davis and NBC reporter, Carole Simpson.

No other spooky details are available at this time, but be sure to keep checking back  for more announcements about this new project.

Staff Writer at Horror News Network
Nick joined the website in 2015. His lifelong love of comics and horror began with Universal Monsters and the Incredible Hulk. He has fond memories of going to Waldbaum’s supermarket with his mother and being rewarded with a 3-pack of sealed comics. It’s been all downhill from there… Since those early days, his life has been immersed in four color action and scares on the silver screen.
https://www.horrornewsnetwork.net/wp-content/uploads/2019/01/firstexorcismontv1971.jpg 280 520 Nick Banks http://www.horrornewsnetwork.net/wp-content/uploads/2016/05/HNN-logo.jpg Nick Banks2019-01-31 21:28:222019-02-10 16:04:21Edwin F. Becker’s Book 'True Haunting' Is Being Developed as a Feature Film by Screen Gems
0 replies