According to the official press release, the series features “… Friday Fitzhugh—girl detective—and Lancelot Jones—her best friend and also the smartest boy in the world—spent their childhoods solving crimes and digging up occult secrets. But that was years ago. And now Friday is in college and starting a new life on her own. She’s moved on. Until she returns home for the holidays and is immediately pulled back into Lance’s orbit. This is literally the Christmas vacation from Hell and neither of them may survive to see the New Year.”

Brubaker (known for crime noir comics such as Criminal, The Fade Out, and the recently wrapped up Image title, Kill or Be Killed, as well as an extended run on Daredevil and a Captain America story arc that you might be familiar with called “The Winter Soldier”) described Friday as a “.. book (that) feels like Lovecraft’s New England is colliding with Edward Gorey’s.  And I like to describe Friday as post-YA, which is a genre that doesn’t really exist. It’s an idea I’ve been circling for a long time, that lets me tap into my own nostalgia for my youth and the YA books I loved back in the 70s and 80s – stuff like The Great Brain, or John Belliars books, or Harriet the Spy, or Encyclopedia Brown. I want to take that concept of the teen detective and those supernatural mysteries aimed at kids, but then let the protagonists grow up, so they have all the same problems we all do… and they encounter a much more dangerous world.”

Friday is the first major collaboration between Brubaker and Martin, and the artist described Brubaker as “…one of my favorite comic book writers,” who has  “…a unique quality to his writing, like a sober sadness that permeates all his work and always shines through, whether it’s on his crime noir stories with artist extraordinaire Sean Phillips or on his superhero projects at Marvel or DC. We had the chance to collaborate briefly on a Captain America Annual almost 15 years ago and I remembered the experience fondly, so when the time came last year to start thinking about what creator owned project I wanted to tackle next, I was hoping he’d had a similar positive memory of our past work together. But most importantly, I had his email address.”

Martin looked at the project as not only wish-fulfillment, but also as a chance to experiment with a new style of art, saying that he “…had been wanting to experiment a bit with my drawing style and get away from my comfort zone for a while now, contemplating the possibility of cross-hatching, a technique I’ve never really looked into.  So when Ed pitched me the idea for Friday with its mixture of Edward Gorey and Lovecraft set in a New England-ish town in the late 60s/early 70s, I was surprised to find the concept fit perfectly with what I was hoping to develop.” 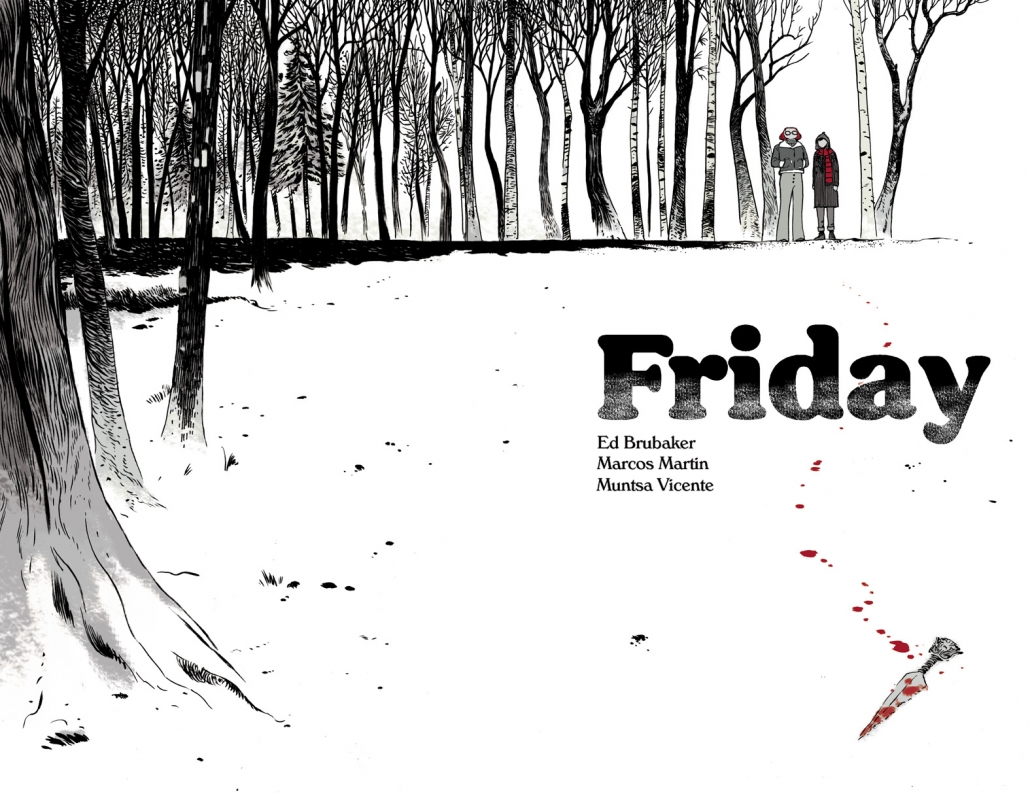 Brubaker was equally excited to work with Martin, stating that “When Marcos wrote to me last summer asking if I wanted to work with him on his next big thing for Panel Syndicate, I think I wrote back within a minute to say yes. I’ve been a longtime fan and watching his style evolve over the years has been amazing, and I was also really interested in what he and Brian K Vaughan created when they released The Private Eye on Panel Syndicate.”

With the vast majority of comic book stores closed around the country, the online format allows readers to access the material immediately, and in the safety of their own homes.  Brubaker noted that “When we started work on the series last summer, we had no idea our surprise drop would come during a global pandemic, with a comic market that’s completely shut down.  But I know that my level of reading comics and books, and marathoning everything on Netflix, has gone through the roof the last month, so hopefully Friday will be a nice surprise for comic readers today, and maybe a small escape from the real world right now.”

Panel Syndicate was the brainchild of Martin, Vicente, and writer Brian K. Vaughan and  “…was born as an example of a distribution model I felt was fair to both readers and creators, and eventually, comic publishers and retailers who can make more informed decisions with the books they were publishing and stocking on their shelves,” said Martin. Panel Syndicate is also unique due to their payment model which allows readers to “name your price” for access to the content.

Friday: Chapter One, “The Girl in the Trees” is currently available in two formats: one for computers and laptops where it’s a double-page spread, and one for iPad, where it’s a single page view. The story is also available in both in English and Spanish.

Martin, Vicente, and Vaughan’s The Private Eye series was eventually collected in a sideways format hard cover collection, so for those long-time fans that crave a physical copy, Brubaker understands and even hinted at this possibility, saying that “For a while now a lot of cartoonists I follow—like Emily Carroll and Tillie Walden—have been publishing their work digitally as they complete it, and then putting out these gorgeous collections in print, and I’ve been curious to try something like that… to serialize a graphic novel in chapters, then put out the book in print (and knowing me, with all sorts of extras) when it’s done.”

Check out the first chapter of Friday (and The Private Eye) at Panel Syndicate.

Brian K. Vaughan & Marcos Martin’s Digital Comic ‘The Walking Dead: The Alien Story’ to Be Collected in a Hardcover...