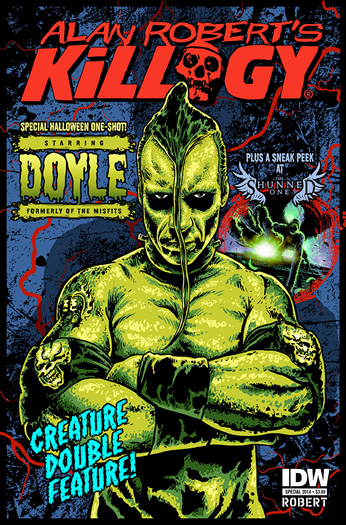 Synopsis: Ex-Misfits horror-punk legend Doyle Wolfgang von Frankenstein will star in a special Halloween edition of Killogy. The one-shot comic continues where the graphic novel left off. It introduces new character, Doyle, as humanity’s last hope in a post-apocalyptic world flooded by an ocean of blood. The book will also feature a 10-page exclusive first-look at Robert’s forthcoming IDW series The Shunned One.

Our Thoughts:  Although this new chapter in the Killogy story features ex. Misfit Doyle Von Frankenstein, it still very much fits into the gruesome apocalyptic world Alan Robert created in the series, picking up right where the last one ended. After the blood tsunami takes over NYC, Robert takes both the storyline and artwork to a grittier and more gruesome place.  This is extremely fitting for Doyle as a character. Robert once again finishes a Killogy book in a very open ended manner. Not only does this leave fans with more questions than answers, but also leaves fans of the series in anticipation for what may or may not come now.

Without giving any spoilers away, Robert has truly outdone himself with following up the Killogy series.  Horror comic fans will relish the emergence of a darker and gorier blood soaked NYC with antihero Doyle.  The issue include a bonus preview of Robert’s “The Shunned One” as well, making it a must for your comic pre-order list. The Killogy Halloween Special featuring Doyle one shot is out on October 29th. Happy Halloween courtesy of Alan Robert!