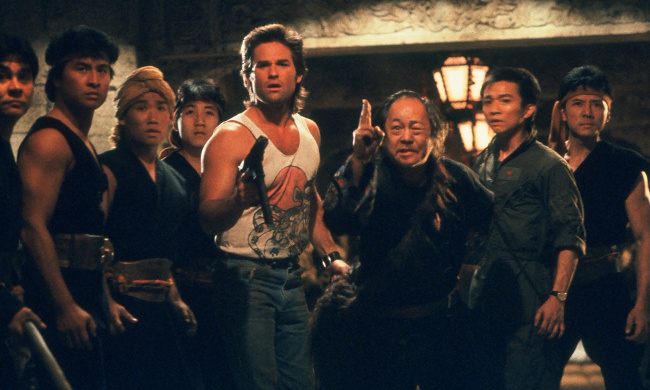 Fans of Kurt Russel’s portrayal of Jack Burton should breathe a sigh of relief because according to an exclusive report by Collider, Dwayne Johnson will not be portraying everyone’s favorite reluctant hero in the planned remake of John Carpenter’s 1986 genre-bender, Big Trouble in Little China.

He also assured fans that “Everything that happened in the original exists and is standalone and I think there’s only one person that could ever play Jack Burton, so Dwayne would never try and play that character. So we are just having a lot of fun. We’re actually in a really great space with the story that we’ve cracked. But yeah, no remake. It is a continuation, and we are deep into development on that as well, and I think you’ll start hearing some things about that probably soon.”

Garcia did not discuss the potential return of Kurt Russell to the sequel, but it is a subject that will certainly be broached if and when production starts on the planned film. One hurdle in getting another Big Trouble in Little China off the launching pad is the fact that Dwayne Johnson is one the busiest and in demand actors working in Hollywood today.  Johnson is currently shooting Disney’s Jungle Cruise and will then immediately begin filming the Fast & Furious spin-off, Hobbs and Shaw.  Next year, “the-man -formerly-known-as-The Rock” will star in the Jumanji sequel as well as the original thriller Red Notice with Gal Gadot and Skyscraper director Rawson Marshall Thurber (and he hasn’t even begun to work on the potential Shazam spin-off Black Adam), so there is really no need to line up at your local theater for a Big Trouble sequel anytime soon.

Stay tuned for updates on this project and all the horror news that is fit to print at your home for horror, the Horror News Network.