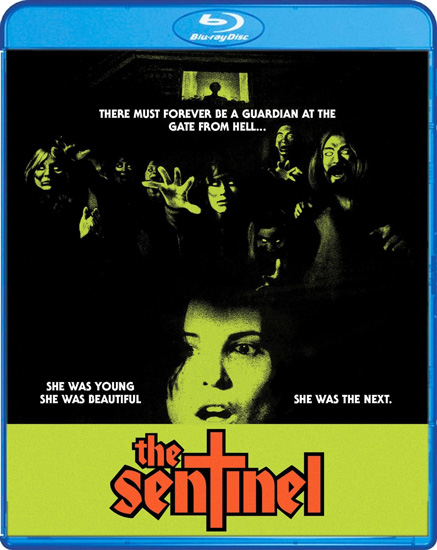 Synopsis: When a beautiful model, Alison Parker (Cristina Raines, Nashville, The Duellists), rents an apartment in a gloomy New York brownstone, little does she realize that an unspeakable horror awaits her behind its doors…a mysterious gateway to hell. Alison likes her eccentric new neighbors, so it comes as a shock when she’s told that, except for a strange old priest, she’s the only tenant.

-2015 High Definition transfer of the film from Interpositive

Synopsis: MEET THE MANIAC & HIS FRIEND.

Deep in the Louisiana bayou sits the ramshackle Starlight Hotel, destination of choice for those who like to check in but not check out! Presided over by the bumbling, mumbling Judd (and his pet croc which he keeps in a large pond out front), the patron of this particular establishment may seem like a good-natured ol’ Southern gent – but he has a mean temper on him, and a mighty large scythe to boot…

Oozing atmosphere from its every pore (the entire film was shot on a sound-stage at the famous Raleigh Studios, which lends it a queasy, claustrophobic feel) Eaten Alive matches The Texas Chain Saw Massacre for sheer insanity – and even drafts in Chain Saw star Marilyn Burns as the terrorised woman-in-peril, alongside William Finley and Mel Ferrer.

Optional English SDH subtitles for the deaf and hard of hearing

New introduction to the film by Hooper

The Gator Creator an archive interview with Hooper

My Name is Buck an archive interview with star Robert Englund

The Butcher of Elmendorf: The Legend of Joe Ball featurette looking at the true-life story of the South Texas bar owner on whom Eaten Alive is loosely based

Behind the Scenes Slideshow

* Optional English SDH subtitles for the deaf and hard of hearin

* New introduction to the film by director Tobe Hooper

* The Butcher of Elmendorf: The Legend of Joe Ball – The story of the South Texas bar owner on whom Eaten Alive is loosely based

* US TV and Radio Spots

Synopsis: Fourteen year-old Lisa (Stacy Keenan, My Two Dads, Step By Step) is raised by her overprotective unmarried mother, Katherine (Cheryl Ladd, Charlie’s Angels, Millennium) who forbids her to date until she’s sixteen. In despair, Lisa and schoolmate Wendy make up a game that consists of inferring attractive men’s phone numbers from their car IDs and giving them anonymous calls. Their latest victim is the handsome Richard (D.W. Moffett, Black Widow), with whom Lisa begins a passionate phone relationship, unaware that he’s the infamous Candlelight Killer. Suspenseful direction by cult filmmaker Gary Sherman (Dead and Buried, Raw Meat) – Lisa promises to keep you on the edge of your seat.

Synopsis: Set in 1965 New England, a troubled girl encounters mysterious happenings in the woods surrounding an isolated girls school that she was sent to by her estranged parents.

Secrets of a Psychopath

Synopsis: Two siblings lure unsuspecting victims to their house through a dating site for games and slaughter. It’s “Psycho” meets the Craigslist Killer. The new film from cult director Bert I. Gordon – The Amazing Colossal Man, Earth vs the Spider, Empire of the Ants, and The Food of the Gods.

Synopsis: Bad things happen to bad people. That s what Ursula, the ring leader of a deranged group of street performers called The Crows, always says. For no apparent reason, the gang starts to torment Mary, a young car driver, and Judy, her dog. Mary’s only crime was not paying attention to their annoying presence. Now, the curtains of the most insane and dangerous show will rise…and fall…for Mary and Judy. This shocking thriller is in the tradition of ‘Hostel’ and ‘Saw’ and features gruesome special effects. Warning: The Crows show is not just about blood. They assure you it will be the scariest, most uncomfortable and grotesque performance you will ever see. Featuring exclusive two-sided reversible collector’s cover art.

Synopsis: Neighbors in an apartment block awake to find their doors and windows completely sealed shut. When strangers in hazmat suits infiltrate their building and begin snatching residents, tempers fray and fear takes over. In order to survive the residents must identify who the enemy is. But they soon discover that the real danger is already inside with them… As a deadly virus of unknown origin sweeps through the building, the neighbors realize that breathing the same air is all it takes for the disease to spread. Unable to identify the infected from the uninfected, the quarantined start questioning the authorities. Loyalties are tested to their limits as friends and families turn against each other in an adrenaline-fueled fight for survival.

Synopsis: A new seven-part series that expands the story of horror film. Tsukiko, a girl with psychic powers, teams with two paranormal investigators to tackle an onslaught of zombies, vampires, and other supernatural horrors!

Synopsis: Bleading Lady Don is a chauffeur and a cinephile who takes his job very seriously. When his latest assignment takes him to the set of a low-budget horror film, he’s overjoyed to learn he’ll be driving Riversa Red, his favorite B-movie Scream Queen. While driving his beloved idol, Don assumes the role of bodyguard and turns angrily protective, especially after learning that Riversa has a stalker. Hell-bent on protecting his queen and fueled by paranoid fantasies, Don’s usual temper tantrums go to deadly extremes. Soon he proves to be not only Riversa’s biggest fan, but also her worst nightmare.