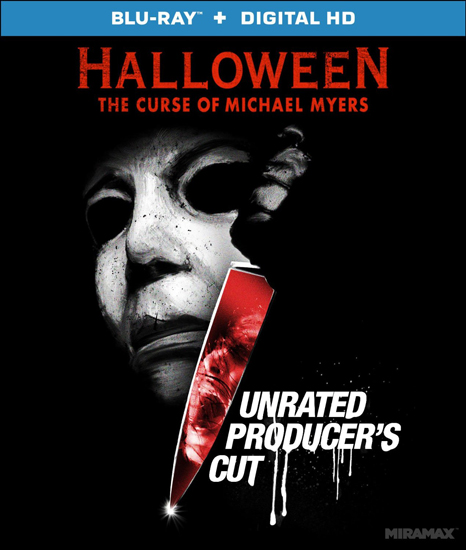 Synopsis: Six years after Michael Myers last terrorized Haddonfield, he returns there in pursuit of his niece, Jamie Lloyd, who has escaped with her newborn child, for which Michael and a mysterious cult have sinister plans.

House of the Long Shadows [Blu-ray]

Synopsis: Newly Re-mastered in HD! Horror legends Vincent Price (The Oblong Box), Christopher Lee (The Crimson Cult), Peter Cushing (Madhouse) and John Carradine (The Sentinel) star as the screen s greatest gruesome foursome! When a young novelist, Kenneth Magee (Desi Arnaz, Jr., Billy Two Hats) spends a night at Baldpate Manor to win a bet that he can turn a best-selling novel in 24 hours, he gets more than he bargained for. The grizzly Grisbane clan arrives to celebrate the 40th anniversary of a ghoulish family secret. And their dinner party has murder on the menu. Lightning! Thunder! Torrential rain! Clattering shutters! Creaking doors! A locked attic! A sinister secret! Murder! All the ingredients of the classic Old Dark House tale come together in this top-notch horror film by cult filmmaker Pete Walker (House of Whipcord). Co-starring Richard Todd (The Assassin) and Sheila Keith (Frightmare).

How far would you go to inherit everlasting life? When Margaret (Katharine Ross, The Stepford Wives) and her boyfriend Pete (Sam Elliot, The Big Lebowski, Road House) have a car accident in the English countryside, the other driver offers to take them to his lavish country estate to make amends. But once there, they are surprised to learn that all of the other houseguests are already expecting them! It’s not long before the couple’s fear turns into terror when the guests (including Roger Daltrey, Tommy) begin dying in unspeakable ways. Now it’s clear, the true master of the house is a supernatural force that will stop at nothing to find the rightful heirs for an unimaginably horrible legacy.

-HD transfer from the inter-positive

Synopsis: Focuses on a small town that is turned upside down when several local people, who have been long presumed dead suddenly reappear, having not aged and unaware of their own fatality. As they attempt to resume their lives, strange phenomena and gruesome murders begin to occur.

Synopsis: Walerian Borowczyk’s most notorious and controversial film wildly re-works the classic Beauty and the Beast story into a fairy tale strictly for adults.

Bestial dreams interrupt the venal plans of a French aristocrat attempting to save a crumbling mansion by marrying off his deformed son, Mathurin, to a insatiable American heiress, Lucy. Yet Mathurin seems more interested in his horses than in his bride-to-be, and when Lucy finds out about the story of his 18th-century ancestor Romilda’s (Sirpa Lane) relationship with the titular beast it sparks to life one of the most outrageous dream sequences in cinema history.

A huge hit in France that was extensively censored and banned elsewhere, The Beast broke new ground in explicitness and remains a truly startling experience even today.

The Making of The Beast: camera operator Noel Very provides a commentary on footage shot during the film’s production

Frenzy of Ecstasy, a visual essay on the evolution of Borowczyk’s beast and the sequel that never was, Motherhood

Gunpoint, a documentary short by Peter Graham produced and edited by Borowczyk (11:04)

Behind Enemy Lines – The Making of Gunpoint (5:16)

Illustrated booklet featuring new writing on the film by Daniel Bird and an archive piece by David Thompson, illustrated with original stills

Boris Karloff Collection – 6 Movie Set: The Black Room, The Man They Could Not Hang, The Man With Nine Lives, Before I Hang, The Devil Commands, and The Boogie Man Will Get You

Synopsis: 6 Films with the Master of Horror!

He was the epitome of class and style. No matter how grisly the circumstances, he’d rise above with talent, poise and even charm. Enjoy 6 of his finest chillers from his peak years in the 1930s and 1940s, all demonstrating his amazing range. It’s a collection all fervent classic horror fans have been eagerly waiting for!

The Man They Could Not Hang

The Man With Nine Lives

The Boogie Man Will Get You

Synopsis: HE COMES FROM BEYOND THE GRAVE!

BASED ON SCIENTIFIC FACTS!

YOU WON’T BELIEVE YOUR EYES!

From the pen of the legendary Curt Siodmak (The Wolf Man, Donovan’s Brain) and director Edward L. Cahn (It! The Terror From Beyond Space) comes this smash-bang thriller starring Richard Denning (Creature From The Black Lagoon) as a police doctor hot on the trail of a mob boss who’s hired an ex-Nazi scientist to re-animate his dead thugs to do more dirty work!

Synopsis: The revelry of an upscale Halloween party is shattered by gunshots as two armed robbers attempt to fleece the well-to-do patrons of their money and jewels.

Synopsis: The Purge If you could commit any crime without consequences, what would you do? From the producer of Paranormal Activity and Sinister, comes an inventive thriller that dares you to survive the most dangerous night in America – The Purge – when all crime is legal for 12 hours. An intruder breaks into James Sandin’s (Ethan Hawke) gated community during the yearly lockdown and begins a sequence of events that threatens to tear the family apart. Now, it is up to James, his wife, Mary (Lena Headey), and their kids to make it through the night without turning into the monsters from whom they hide. The Purge Anarchy The New Founders of America invite you to celebrate your annual right to Purge. The Purge: Anarchy takes it to the streets, for the country’s yearly 12 hours of anarchy, when all crime is legal. This story follows an unlikely group of five strangers over the course of the night. As they fight to survive a night fraught with impossible decisions, these strangers will find out just how far they will go to protect themselves and, ultimately, each other.

Haunting at the Rectory

Synopsis: Based on chilling real life events, this story charts one couple’s terrifying encounter with the dark forces of the supernatural. In 1930, Reverend Lionel Foyster and his wife Marianne move into the Borley Rectory when Reverend Foyster is named rector of the local parish. The couple’s peaceful existence is soon shattered by a series of unexplained occurrences, which quickly escalates into a heart stopping nightmare. Reverend Foyster and Marianne must discover the deadly secrets of the rectory to avoid becoming another tragic footnote in the dark history of ‘The Most Haunted House in England.’

Synopsis: A Haunted House Marlon Wayans and Cedric the Entertainer star in this outrageously funny supernatural scary movie. When young couple Malcolm (Wayans) and Kisha (Essence Atkins) move in to their dream place, they soon discover they’re not alone. But it’s not the home that’s possessed, it’s Kisha. Now, Malcolm will go to hilarious extremes–including hiring a priest, a psychic, and a team of modern-day ghostbusters to get his place and his sex life back to normal. A Haunted House 2 Marlon Wayans returns in this outrageous and wickedly funny sequel as Malcolm who, after exorcising the demons of his ex, is starting fresh with his new girlfriend (Jaime Pressly) and her two children. But after moving into their dream home, he’s once again plagued by bizarre paranormal events. Co-starring Gabriel Iglesias and Cedric the Entertainer, it’s the ultimate laugh-out-loud scary comedy that critics call “over the top hilarious!” (Fernando Esquivel, Latino-Review.com)

How to Survive a Paranormal Presence

Synopsis: In 1996, nine college students headed off for a fun weekend at a lake house on Horse Creek. At the house, they uncovered the horrific story of Dorchester Stewart, also known as Crinoline Head, and his doll-maker mother, who once lived in the house. That weekend, six students were killed, two survived and one went missing. Now twenty years later, one of the survivors, Paul Donner, is teaching at the college he once attended. When his students discover an old newspaper article about the tragedy, they decide to visit the old lake house to learn more about Crinoline Head. While looking for answers, they discover something much more terrifying. DVD Extras: Auditions, Outtakes, and Extended Scenes.

Synopsis: A woman on the run from her abusive husband encounters a mysterious hitch-hiker.