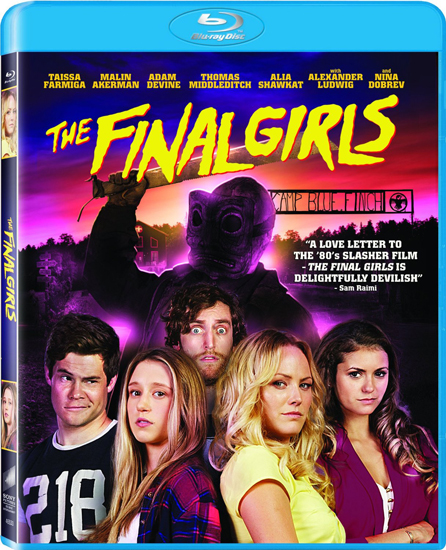 Synopsis: When Max (Taissa Farmiga) and her friends reluctantly attend an anniversary screening of “Camp Bloodbath”, the infamous ‘80s horror film that starred Max’s late mother (Malin Akerman), they are mysteriously sucked into the silver screen. They soon realize they are trapped inside the cult classic movie and must team up with the fictional and ill-fated camp counselors, including Max’s mom as the scream queen, to battle the film’s machete-wielding killer. With the body count rising in scene after iconic scene, who will be the final girls left standing and live to escape this film? THE FINAL GIRLS is a genre-blending horror comedy also starring Adam DeVine, Thomas Middleditch, Alia Shawkat with Alexander Ludwig and Nina Dobrev.

-The Making of “Stung”

Synopsis: An Office Space meets Shaun of the Dead action-packed vampire comedy, Bloodsucking Bastards stars Fran Kranz as Evan Sanders, a dutiful and overworked employee stuck at a soul-killing corporation with his beautiful co-worker and girlfriend Amanda (Emma Fitzpatrick) and his slacker best friend Tim (Joey Kern). Evan’s world begins to crumble when Amanda dumps him and his boss Ted (Joel Murray) hands his coveted promotion to his nemesis Max (Pedro Pascal). When his office mates start going through disturbing changes and bodies begin to pile up, Evan must find a way to stop the evil brewing amidst the cubicles and water coolers, win back Amanda, and rescue his workplace pals before his life and career go from dead-end… To just dead.

-Behind the Scenes (“Bloodsucking Bastards on Set”)

Synopsis: After a dormant volcano erupts miles outside of Los Angeles, something within the molten hot lava is awakened. Birthed from the bowels of the earth itself, arachnid-like creatures with an obsidian-black exoskeleton swarm out. One man, Colton West, a washed-up, former A-list action star, suddenly finds himself the real life hero as he’s forced to use his onscreen characters’ know-how to save the entire city from being victims to the most horrifying villains you couldn’t write any better.

Synopsis: In an effort to do something different, four friends head into Australia’s outback to explore Charlie’s Farm, the site where a violent family met their end at the hands of an angry mob. Despite all warnings, they persist in their horror-seeking adventure. Once there, the four friends are unaware that they are being watched. While exploring the property to prove the myth, they encounter Charlie, who shows them that some legends never die.

Synopsis: Fritz Haarmann, aka the Butcher of Hanover and the Vampire of Hanover, was a German serial killer responsible for the murders of two dozen boys and young men during the so-called years of crisis between the wars. His case would partly inspire Fritz Lang s M, and its central character portrayed by Peter Lorre, as well as this forgotten gem from 1973.

Tenderness of the Wolves treats the viewer to a few weeks in the company of a killer. Baby-faced and shaven-headed, in a manner that recalls both M and F.W. Murnau s Nosferatu, Haarmann is a fascinating, repulsive figure. Using his status as a police informant to procure his victims, he dismembers their bodies after death and sells the flesh to restaurants, dumping the remainder out of sight. This isn t an easy film to watch, but it certainly gets under the skin…

Produced by Rainer Werner Fassbinder (who also supplies a shifty cameo), Tenderness of the Wolves provided two of his regular actors with a means of expanding their careers. Ulli Lommel later responsible for the infamous video nasty The Boogeyman made his directorial debut, while Kurt Raab wrote the screenplay as well as delivering an astonishing performance as Haarmann.

Synopsis: Zoe is a strange little girl, with a not so imaginary friend the Krampus who is the dark companion of kindly old St. Nicholas. The Krampus has been unleashed upon a small town and the legendary demon will seek out all the naughty people to punish them at Christmas time. No one is safe as the Krampus hunts them down, tortures them and then drags their helpless souls to the depths of hell.

Synopsis: Jeremy, a local police officer leads a life of a confusing past, spending his current time searching for his kidnapper as a child. After other children begin missing, Jeremy pieces together the truth and realizes that his childhood kidnapper could be a creature of ancient yuletide lore, Krampus, who is the brother of St. Nick, and punisher of children who perform acts of unspeakable evil without repercussion. Can Jeremy kill Krampus and prevent more missing children?

Synopsis: When a single mother (Ali Larter) and her two young children are tormented by an increasingly strange and intense presence in their quiet suburban home, she turns to her scientist boyfriend to take on the violent forces that paranormal experts are too frightened to face.

Synopsis: Eight Mexican directors unite to bring tales of the most brutally terrifying Mexican traditions and legends to vividly shocking life. MEXICO BARBARO presents haunting stories that have been woven into the fabric of a nation s culture, some passed down through the centuries and some new, but all equally frightening. Stories of boogeymen, trolls, ghosts, monsters, Aztec sacrifices, and of course the Day of the Dead all come together in urban and rural settings to create an anthology that is as original as it is familiar and as important as it is horrifying.

Some Kind of Hate

Synopsis: A bullied teenager is sent to a reform school where he accidentally summons the spirit of a girl, herself a victim of bullying, who takes vengeance on his tormentors.

Synopsis: Storm of the Century

From legendary horror writer Stephen King comes this Emmy®-winning mini-series where a little island meets a big storm in a face-off of epic proportions. When a murder shakes the town of Little Tall, the local constable must stop the evil that is growing as quickly as the blizzard.

A group of friends exploring the Bermuda Triangle run across a mysterious ghost ship that has been lost for 50 years and is now jeopardizing their fate.

Lacy seeks out the work of an unknown painter, Sean, in hopes of adding to her art gallery. But little does she know, this artist has had a troubled past. Now several girls are missing and Sean has taken up an interest in ice sculpture…with a human twist.

One by one, Tess Hooper’s friends are brutally murdered. Linking them together is the “Watch Me” email—a file that spreads through electronic address books to seek its victims. As Tess becomes the next target, she must untangle the puzzle to stop the file’s poisonous rampage.

Three campers head into the wilderness for a bare-bones expedition. But when one is severely injured, they are stranded with limited supplies. As the search for help becomes more urgent, the building tension becomes more dangerous.

Detective Nick Ferguson is on the verge of capturing a serial killer, but hallucinations and nightmarish visions thwart his efforts…until he realizes that the visions themselves may be the key to closing in on the sadistic murderer.

When Olivia Perez mysteriously kills her children, it seems as if she has fallen under the spell of the legendary La Llorana. But this is no coincidence. Soon the curse begins to spread and more women are following in Olivia’s footsteps.

Secrets of a Psychopath

Synopsis: Two siblings lure unsuspecting victims to their house through a dating site for games and slaughter. It’s “Psycho” meets the Craigslist Killer. The new film from cult director Bert I. Gordon – The Amazing Colossal Man, Earth vs the Spider, Empire of the Ants, and The Food of the Gods.

Synopsis: The Jimmy’s End saga is made up of five shorts. Rather like a comic book series, each film in the cycle contributes to the overall story, as well as having a clear, standalone narrative and purpose. * DVD and audio CD boxset featuring 100 page + illustrated screenplay / storyboard book by Alan Moore and comic book artist Kristian Hammerstad. * DVD contains 5 short films and extra bonus material including interviews with Alan Moore and Mitch Jenkins. * CD of the soundtrack to the films. – Soundtrack By: Adam Drucker and Andrew Broder as Crook & Flail. Adam Drucker aka Doseone is a founding member of LA based hip hop collective Anticon, as well as being a member of Nevermen, Subtle, 13 & God and cLOUDDEAD. Andrew Broder has released music under various monikers including the alt-rock trio Fog and the critically acclaimed project, Hymie’s Basement with Yoni Wolf of Why? / cLOUDDEAD. Crook & Flail has been working with Alan & Mitch since early 2010 when they scored their audio book project Unearthing. * Marketing from Lex socials and mailing list and Alan Moore facebook (300k followers) and twitter (11k).

Expressway to Your Skull

Synopsis: Ed and Amy, a thrill-seeking couple in their 20 s want to get away from the city into the backwoods for a spur-of-the-moment camping trip to cut loose and expand their minds . With a stash of drugs and half-cocked enthusiasm, Ed and Amy hit the road. While in the woods, the couple soon crosses paths with a mysterious and unnerving survivalist named Charlie. As their plans for a drug-hazed vacation turn sour they instead find themselves fighting for their lives in a deranged psychedelic-fueled death trip that blurs the line between reality and nightmares.

Synopsis: ECHO (2009, R, 96 mins) Fear and paranoia seep from every wall in this tense and creepy psychological thriller from the producers of The Ring and Dark Water. Jesse Bradford (W., Bring It On) is Bobby Walker, fresh out of prison and living in his dead mother’s apartment as a condition of his parole. Plagued by eerie echoes of the dead trapped in the building, Bobby’s terror mounts as he begins to suspect his neighbors had a sinister hand in his mother’s death…and could come for him next.

ABERRATION ( 2013, NR, 85 mins ) On the outside, Christy Dawson is just a normal high school student, but she hides a chilling secret. Caught between the worlds of the living and the dead, she has been plagued by horrific, terrifying visions. With the appearance of a ghostly young boy, these horrific glimpses of evil begin bleeding into her reality. Someone or something is killing everyone around her, and her only hope of survival is to uncover the truth behind a mystery that has shrouded the entire town in terror.

FINGERPRINTS ( 2008, R, 96 mins ) In this terrifying supernatural thriller, a troubled teenager sets out on a grisly path to discover the disturbing truth behind a well-known urban legend. Haunted for fifty years by the horrifying tale of a train colliding with a school bus, killing all the children aboard, the small town left behind continues to suffer as a stomach-churning chain of murders claims victim after victim. Brought to life by a stand-out cast including Kristin Cavallari (MTV’s The Hills), Leah Pipes (Sorority Row), Josh Henderson (Desperate Housewives), Lou Diamond Phillips (Stand and Deliver), Andrew Lawrence (United States of Tara) and Sally Kirkland (Bruce Almighty), FINGERPRINTS will leave its mark on your nightmares!

DAISY CHAIN (2010, R, 87 mins) The very nature of evil drives this chilling psychological thriller. Oscar nominee* Samantha Morton (Minority Report) and Steven Mackintosh (The Escapist) are Martha and Tomas, a grieving couple who move to a remote Irish village in the wake of their baby daughter’s death. Touched by a traumatized, autistic girl whose entire family has perished in tragic accidents, they open their home to young Daisy. Martha believes that with her love, she can help Daisy…until a disturbing series of strange occurrences leads her to believe that her little girl may not be as innocent as she seems. *Best Actress: In America, 2003.