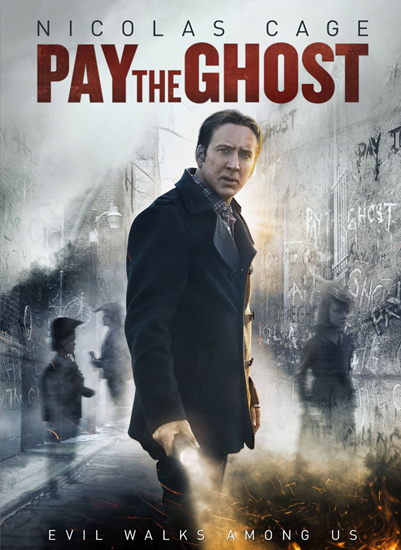 Synopsis: Oscar winner Nicolas Cage (Leaving Las Vegas) stars in this intense and chilling thriller about one man’s desperate search for his missing child. One year after his young son disappeared during a Halloween carnival, Mike Lawford (Cage) is haunted by eerie images and terrifying messages he can’t explain. Together with his estranged wife (Sarah Wayne Callies, The Walking Dead), he will stop at nothing to unravel the mystery and find their son—and, in doing so, he unearths a legend that refuses to remain buried in the past.

Synopsis: An overweight lab technician with low self esteem, brought on by his dominant mother, becomes a serial killer of female nurses.

Synopsis: From writer/director/composer Chris Alexander the editor-in-chief of Fangoria – comes the spiritual sequel to his acclaimed debut feature.

Shauna Henry returns as the vampire Irina, now reborn to silently roam a lush countryside quenching her thirst for human blood. But rather than follow standard horror narratives, Alexander instead subverts the genre to explore a crimson-soaked fever dream influenced by the 70s EuroHorror of Jess Franco and Jean Rollin. Nivek Ogre of Skinny Puppy and REPO! THE GENETIC OPERA co-stars in this haunting and visionary (Cinema Axis) shocker featuring costumes by Alex Kavanagh (the SAW franchise, LAND OF THE DEAD) and FX work from Paul Jones (SILENT HILL, the RESIDENT EVIL films) for an opus of the undead unlike any you’ve ever seen.

Q&A from the Toronto Premiere

Synopsis: Eve (Tina Ivlev) breaks free after being chained in a basement and abused for 9 months by a manipulative psychopath. Instead of fleeing, she discovers there are other girls just like her scattered around town. Now fueled with rage, she must force her captor to become the captive and lead her to the other girls… before it’s too late.

Synopsis: During a session, a psychologist unleashes her mysterious patient’s latent madness… Now he’s carrying on the therapy by himself! Symphony in Blood Red new twist on the ‘giallo’ formula in the tradition of Argento’s Tenebre.

Documentary with the best voices of Italian horror including Dario Argento

Synopsis: Hermann, a failed sculptor, is about to kill himself when he finds a strange, talking hole in the wall. The creature in the hole (Denise Poirier, the voice of ÆON FLUX) has the power to fulfill his wildest dreams, but things go horribly wrong and when the killing starts, Hermann is thrust into the worst nightmare of his life. Deep Dark is a twisted tale warning you to be careful what you wish for, because it just might get you.

Synopsis: Music agent Bernie Stein, his scientist nephew Frankie, and a drugged out roadie named Iggy team to create a superstar by putting together the remains of dead rockers. All goes according to plan until a mishap leads Iggy to steal Liberace’s private parts instead of those of Jim Morrison. The monster is brought to life and is on the road to rock ‘n’ roll success when the Liberace side of the monster begins to assert itself, with tragic results.