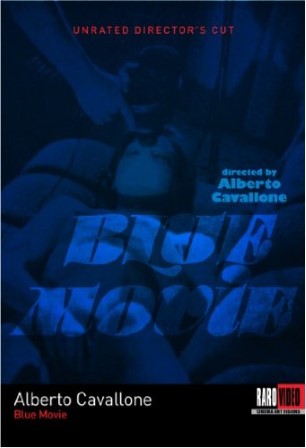 12 movie releases this week, fellow fiends, including the Blu-ray release of Sleepaway Camp.

Touching upon art, trauma, madness and sexual perversion Blue Movie is one of the most obscure of the many late 70s Italian genre films, the film centers around Silvia (Dirce Funari) who has suffered an attempted rape. She escapes the attack and is rescued by Claudio (Claude Maran), a photographer who takes her under his wing. Claudio is obsessed by war images that tell of death, devastation and pain. While working with a supermodel, Daniela (Danielle Dugas), it appears that their relationship is bordering sado-masochistic. Things slowly build, with a fair dose of nudity and perversion. Observing all this as best she can Silvia begins to fall in love with Claudio, however she struggles to discern between reality and her traumatic past, especially while Daniela, who is locked in a room, regresses to an almost bestial dimension.

The directorial debut from E.L. Katz stars Pat Healy (Compliance) as a recently fired father facing eviction who agrees to take on an escalating series of insane challenges in exchange for cash payments from a rich couple with a twisted sense of humor.

Academy Award winner Jack Palance stars in this terrifying adaptation of Bram Stoker s classic vampire legend written for the screen by sci-fi/horror master Richard Matheson and produced by the legendary Dan Curtis (Dark Shadows). Palance is Count Dracula, whose centuries-old existence is threatened after he attacks the lovely Lucy Westenra (Fiona Lewis) and her fiancé (Simon Ward, The Tudors) calls in famed vampire hunter Dr. Van Helsing (Nigel Davenport) to investigate. Filmed on location in England and Yugoslavia, Dan Curtis Dracula has been transferred and restored in 2K High Definition from the original 35mm camera negative and presented here on Blu-Ray for the first time!
Special Features:

The new fitness club in town has everything a health nut could ever want: a variety of workout machines, classes taught by friendly (and frisky) instructors, and a state-of-the-art computer control system for maximum client comfort. Unfortunately it s also possessed by the evil spirit of the owner s dead wife, and before long every dumbbell, leg press, and rowing machine becomes a deadly weapon for her to enact bloody vengeance on the club s beautiful members. So if you re looking for a real workout from hell, enter DEATH SPA a new exercise in terror!
Special Features:
Commentary, Making of, Theatrical Trailer, Video Trailer

Fossil Ridge was thought to be a peaceful, secluded cattle ranch, but hidden away within the ridge is actually a breeding ground for vicious, prehistoric velociraptors. When the velociraptors escape their confines, the nearby townspeople must figure out how to fight the ferocious foes that are now hunting them down. One thing’s for sure – whoever said that these deadly hunters were extinct was wrong.

A group of friends travel up to a cabin located deep within the forest. Shortly after arriving, they stumble across an abandoned mine and decide to explore the dark and mysterious tunnels. As the group hikes deeper within the mine, they make a shocking discovery that quickly turns their excitement into fear. Hunted by a mysterious force, the group must work together to escape the mine alive.

A group of students are trapped at school after a time capsule from the 1950s is cracked open by an earthquake. The students soon realize that ghostly spirits escaped from the time capsule possessing the principal and three other teachers.

A young couple, settling into their new life in their spacious home, lose their newborn to a miscarriage. After the tragedy, Thao is inconsolable and won’t let her baby’s body leave the house. She soon begins suffering from terrifying visions and she slowly begins to lose her sanity. Her husband, Thanh, soon begins experiencing strange things around their home and when his wife turns on him, he must race to uncover the secrets of the house in the alley before they both lose their sanity…and their lives.

When a young nurse begins work at an isolated psychiatric ward, she quickly becomes fascinated with Patrick, a seemingly comatose patient who is the subject of a mad scientists cruel and unusual experiments. What starts as an innocent fascination quickly takes a sinister turn as Patrick begins to use his psychic powers to manipulate her every move, and send her life into a terrifying spiral out of control.

After a terrible boating accident killed her family, shy Angela Baker (Felissa Rose, Return To Sleepaway Camp) went to live with her eccentric Aunt Martha and her cousin Ricky. This summer, Martha decides to send them both to Camp Arawak, a place to enjoy the great outdoors. Shortly after their arrival, a series of bizarre and violent accidents begin to claim the lives of various campers. Has a dark secret returned from the camp’s past…or will an unspeakable horror end the Summer season for all?
From its grisly makeup effects to the truly shocking, and unforgettable, climax, Sleepaway Camp is no ordinary slasher film…it’s a cult classic!