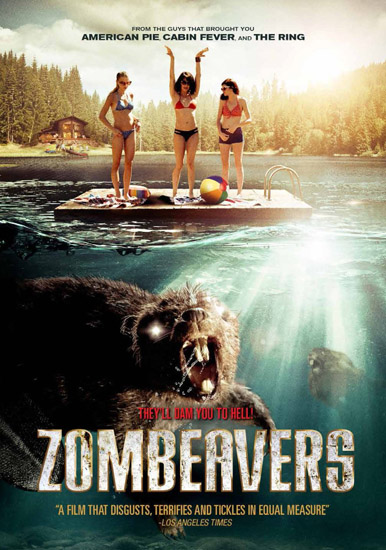 Synopsis:   They’re ferocious, they’re furry, they’re ZOMBEAVERS, the stars of this 2015 horror-comedy, directed by Jordan Rubin. When a trio of sexy college girls (Cortney Palm, Rachel Melvin, Lexi Atkins) arrive at a remote cabin for a weekend getaway, their vacation is quickly jeopardized by a hungry bear, a menacing hunter (Rex Linn), and the girls own party-crashing boyfriends (Hutch Dano, Jake Weary, Peter Gilroy). However, these preliminary disturbances are nothing compared to what lurks in the lake by the cabin: The result of a local chemical spill, a horde of bloodthirsty, zombified beavers closes in on the unsuspecting co-eds. It isn’t long before the kids are engaged in a life and death struggle with the ferocious ZOMBEAVERS, but it turns out that the creatures themselves are only the beginning of their nightmare. Featuring cameos by Bill Burr and John Mayer, Zombeavers is infectiously funny and terrifying. Zombeavers. They’ll dam you to hell!

Synopsis:   It is based on the true story of Greek pirate turned businessman Ioannis Varvakis, who made his fortune selling caviar in Russia and all over the world. Varvakis strives all his life for freedom for himself and then for his country, only to find that freedom cannot be won until it is shared.

The Freeling family have a new house, but their troubles with supernatural forces don’t seem to be over.

Carol Anne is staying with her aunt in a highrise building, and the supernatural forces that have haunted her previously follow her there.

Curse of the Witching Tree

Synopsis: An innocent woman, accused of murdering her son and hanged as a witch, curses a tree and the children who play around it. The effects of this act of revenge echo through the years and centuries, and restless spirits haunt the house where the bodies of the cursed children have been buried. A family move into their new home, and begin to uncover the terrible truth behind The Witching Tree and the murdered children upon which they unknowingly sleep…

Raiders Of The Lost Shark

Synopsis: Four friends set out by boat for a vacation on a private island. But unknown to them, a weaponized shark has escaped from a top secret military lab, a shark genetically engineered with hate in its blood, and programmed to hunt any human within range. Now, these friends must band together to battle an all new brand of predator who will stop at nothing to remain at the top of the food chain. Bonus features include: Previews

Synopsis: Ten contestants appear on a competitive summer boot camp reality show geared toward weight-loss. As the competition grows more intense, the contestants realize they are losing more than just weight; they are losing competitors. As contestants disappear in the night, it becomes apparent that a killer is on the loose, and one million dollars is at stake.

Synopsis: A group of amateur paranormal investigators decide to taunt spirits from the afterlife in a last ditch attempt to record a real poltergeist encounter. The experiment works, but they awaken something angry and very deadly – something that follows them home. Now they will have to defend their families from the spirits who are not going away without taking some souls with them.

They Will Outlive Us All

Synopsis: New York City has been devastated by a series of ‘Frankenstorms,’ food is scarce and all the bridges and tunnels are closed. In this post-apocalyptic city, roommates Margot and Daniel are bracing themselves for not only the next storm, but for something much more gruesome and undead – something growing right inside their apartment building. Can they survive each other long enough to stop it? Bonus Materials Teasers Original Trailer Previews Bonus features include: Previews, Original Trailer, Teasers

It the Terror From Beyond

Synopsis: The first manned expedition to Mars is decimated by an unknown life form…which stows away on the rescue ship.

Awake In The Woods

Synopsis: The Woods in Marion N.Y. have a past. Hunters report unusual activity, hikers describe chilling experiences , parents warn their children to avoid the woods, and the lucky few who survive the woods alone have all gone insane. When a young girl does not heed her parents warning, she goes missing in the woods. Three friends decide to document their search for the truth. What they witness can’t be explained. In the end only one is left wandering Awake In The Woods! Bonus features include: TRAILER/INTERACTIVE MENUS

Synopsis: Halloween marks the one year anniversary of the disappearance of Daniel, Lana Williams’ brother. Although he is considered dead by the authorities, Lana is obsessed with finding him and stumbles across a local investigative reporter whose wife committed suicide a year ago on the exact same night. He suspects a satanic cult is actually responsible for her death. Believing there is a link connecting the deaths, they travel to a small rural town in Indiana. Meanwhile, the Reverend Hiram Graves and his Hand of Glory ministry roll into town and hold a bizarre tent revival to save the souls of the wicked. As Halloween night approaches, a murderous cult of masked killers descend upon the town to kidnap and sacrifice five victims – one for each point of the pentagram. How far will Lana and David go to discover something more evil than they ever imagined had happened to Daniel? This Halloween lock your doors and windows and pray for dawn because tonight is All Sinners Night!

Synopsis:   An amphibious shark-like monster terrorizes an abandoned secret military base and the people who live on the island it is located on. A marine biologist, as well as several other people, try to stop it before it is too late…

Synopsis: Michelle Jamieson is too smart for faith. She has been raised in the tired traditions of her Baptist family and is ready to expand her independent thought and stand in her logical, free will. When the opportunity arises for her to separate from her Washington D.C. home and her bible-thumping parents, she takes a scholarship for her sought after medical program at the University of Minnesota in Minneapolis.

Eager to base her beliefs in the proof of science and develop her life decisions on the tangible experience of medicine – where every effect has a root cause and miracles come in the form of prescription slips; she wisps across the country to find her path, her truth. But what she finds supersedes her natural existence – making her mortality vulnerable to the spiritual realm she so comfortably doubted. Michelle stays in a Minneapolis mansion, a family property dating back many generations. She begins to encounter strange and unexplainable occurrences. As she is forced to investigate, what she uncovers is a world of family secrets and unspeakable evils that God himself may not save her from. In whose name will she cry out now?

Synopsis: The Apocalypse has happened. “Aftermath” is the story of those who have survived. But their nightmare has only begun. In a world where the infected kill and eat the living, how much time does anyone really have? A World where the living may still prove to be more dangerous than the dead? Witness what happens when the World you know ends, and the next chapter, begins.

Synopsis: Some say evil is skin deep, yet the forbidden ancient texts say that true evil is embedded in the soul of the world itself. Two men unknowingly play their part in an eons old cycle of death and rebirth when homeless brothers Tom and Vernon stumble into an abandoned building for shelter, entering a hellish world of shadows and nightmares that will change their lives forever. Trapped and psychologically tortured by unseen forces, the brothers descend into a vortex of madness dominated and controlled by demon succubus and paranormal entities for one sole purpose…to re-awaken the Anti-Christ. Take a terrifying journey into the heart of evil in this shocking motion picture.

5-Movie Collection: In the Heart of the Deep

When an archeologist accidentally awakens an unknown species of sea creature that has been asleep for centuries, he learns there’s only one way to stop it—by sacrificing an innocent virgin. Starring James Earl Jones.

Based on the novel by Jack London, The Legend of Sea Wolf chronicles a tyrannical sea captain (Chuck Connors) who torments his crew unmercifully.

Creature from the Haunted Sea

In this Roger Corman classic, a mobster (Antony Carbone) helps Cuban loyalists escape by boat, plotting to kill and rob them and blame their deaths on a mythical sea monster…until the beast actually comes to life.

In 2103, one corporation will do anything for world domination…even if that means sending an entire ship and its crew out into the ocean with deadly cargo. Now the captain must try to save the ship in order to stop a global catastrophe.

When they pick up the survivors of a drifting boat, a couple is held hostage at sea and is forced to fight for their lives. Starring Kate Jackson, Kenneth Welsh, Bruce Greenwood and Kelly Rowan.

Synopsis: Serial killer Wayne Montgomery is alleged to have committed 41 murders between 1979 and 2007, leaving behind an extensive found footage library of his work. Now, a new generation copies Wayne’s brutal killings in the digital age. This is the fictionalized, docu-thriller account of one of the world’s most prolific serial killers – and the devoted followers who are hell bent to carry on his legacy. Bonus Materials Deleted Scenes Theatrical Trailer Two Commentary Tracks Previews Bonus features include: Previews, Two Commentary Tracks, Theatrical Trailer, Deleted Scenes