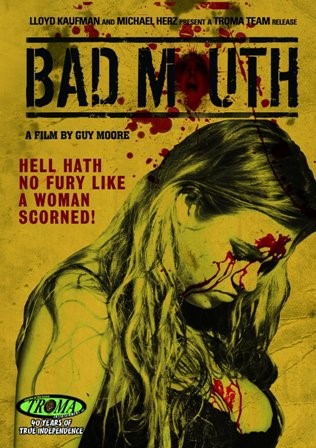 Another week of no complaints, fiends.  We’ve got 13 fresh movie releases and 4 collections.  Check out Evilspeak and Final Exam in their Blu-ray debuts.  I, Frankenstein is also coming out on just about everything.  Oh, hey: another Godzilla movie is also out this week.  On top of that there’s an additional 20 movies strewn about the Collections section.  I wouldn’t go so far as to say it’s a smorgasbord of movies this week, but maybe a nice little buffet table comprised of zombies, vampires and Troma-esque  B fun.  Enjoy!

Hell hath no fury like a woman scorned. Her name is BADMOUTH, and she’s about to unleash HELL! The new killer thriller from director Guy Moore is a roller coaster ride of characters from transvestite prostitutes to lesbian zombies, stoned rappers, feral bushwackers and the best hitgirl this side of Hong Kong.

Vampire hunter Blade is summoned by the Shadow Council, the inner circle of the vampire world. It seems that a mutation has occurred and a new breed of vampire, the Reaper, feeds off humans and vampires. Now, the council turns to its sworn enemy Blade to help them fend off the the Reapers’ insatiable appetite for Blood.

Michael left home when he was a teenager and never looked back. Now, after the death of his sister, Chloe, he’s returning home with his fiancée Juliette and his angst ridden nephew Brandon. On arrival, they realize that home isn’t exactly what it used to be. With high walls surrounding the house and security cameras in every nook and cranny it’s more of a military compound than anything else. Enter Gary, Michaels estranged father who, while happy to be reunited with his son and grandson, seems more distracted by other things. As the strange family reunion commences, an uninvited guest shows up and we learn bits and pieces about the real reason behind Chloe’s death and why Brandon is so closed off from Michael. This fractured family will have to come together to fight the ghosts of their pasts and make it out alive!

After the police find Derek’s daughter brutally murdered on the beach, he vows to make the culprit suffer for his actions, even if that person is ‘part of the family.’ With careful research into the history of torture, Derek prepares himself and his basement for a week of brutal tactics that will make his daughter’s killer feel the pain that he has inflicted upon so many others. In a time when stranger danger is ever present, a single father learns that it’s the ones you trust most who have to be watched the closest.

Life sucks for Stanley Coppersmith (Clint Howard, Rock ’n’Roll High School), a teenage outcast who’s bullied by everyone at a strict military academy. When Stanley discovers the crypt of a 16th Century Satanist beneath the chapel, he creates a computerized Black Mass that unleashes unholy revenge upon his tormentors. Now, all hell is about to break loose! Co-starring Joseph Cortese (American History X), Charles Tyner (Cool Hand Luke), R.G. Armstrong (Children of the Corn), Don Stark (That ’70s Show), Lenny Montana (The Godfather), Richard Moll (House) and Haywood Nelson (What’s Happening), Evilspeak is not for the faint of heart.
Prior to its U.S. theatrical release, the distributor of the film requested that the graphic violence be cut to avoid an X rating from the MPAA. The film has been completely restored from a newly discovered 35mm inter-positive source including all of its long rumored scenes of bloody carnage. This new edition includes all-new extras including a new commentary by producer/director Eric Weston (Hyenas).

At Lanier College, the semester is almost over. Exam week is coming to a close when some upper classmen play a prank by staging a phony terrorist attack. It’s super funny. But the next moment of excitement at the school won’t be a prank. And it’s something a lot more final than an exam. Students are falling prey to a knife-wielding maniac stalking the school, bent on making sure that for some, school is out…forever!

When the ocean s surface beings to boil white-hot and a Japanese freighter vanishes into the Pacific, the superstitious villagers of Odo Island fear an ancient legend has come true the legend of Godzilla! Steve Martin, an American reporter in Tokyo, finds himself trapped in the behemoth s path of destruction. With the help of young lovers, Emiko and Ogata, Martin fights to save the world from this monster menace.

A game of paintball turns into a bloodsport in the horrifying slasher movie Hazard Jack. A group of college friends select an abandoned hospital to host their regular paintball wargame, not realizing a bloodthirsty maniac stalks its halls. As the players get distracted by drugs and sex, Hazard Jack sharpens his blades. He was once a decorated soldier in Afghanistan, but his return to the United States gave him only unemployment and scorn. Suffering from post-traumatic stress disorder (PTSD), he snaps, and seeks vengeance against those who have already forgotten the sacrifices he made for the country. So he sacrifices them instead. When you play Hazard Jack s game, everyone loses.

200 years after his shocking creation, Dr. Frankenstein’s creature, Adam, still walks the earth. But when he finds himself in the middle of a war over the fate of humanity, Adam discovers he holds the key that could destroy humankind. From the co-writer of the hit supernatural saga, Underworld, comes the action thriller I, Frankenstein, written for the screen and directed by Stuart Beattie, screen story by Kevin Grevioux and Stuart Beattie, based on the Darkstorm Studios graphic novel “I, Frankenstein” created by Kevin Grevioux.

No other info made available.

Trapped at 30,000 feet aboard a private airplane, four helpless friends are forced to fight for their lives and the lives of their loved ones by participating in a horrific and twisted in-flight entertainment game. Behind the terror, a mysterious and unpredictable captor cruelly punishes those who do not follow his rules.

When his brother is brutally murdered by a gang, Joe finds solace in Piggy, one of his dead brother s old and unstable friends. The two begin a grueling and bloody revenge mission for his brother s killing. Hard, gritty and disturbing this violent vigilant crusade will leave you cheering and shocked as they exact their brutal justice one victim at a time. Piggy ushers in a new breed of Horror…the psychopathic thriller with the eye-for-an-eye morality of an animal.

A fashion blogger documentary turns into a Zombie horror nightmare when college students come face to face with the undead in Youngstown Ohio. Their only hope of survival is a former soldier turned zombie killer (Joseph Aviel) trying to protect them from “The Colonel” (Patrick Kilpatrick), a mercenary working for an evil corporation who developed the serum that causes zombie-ism. Sergio Myers, director and creator made the movie in a record 4.5 days with no script.

Ann Rule Presents: The Stranger Beside Me: A chilling adaptation of Ann Rule’s best-selling novel in which she recounts her friendship with one of America’s most notorious serial killers, Ted Bundy.
The Amy Fisher Story: Drew Barrymore stars as Amy Fisher in the scandalous true story of the Long Island Lolita.
The Elizabeth Smart Story:With never-before-revealed details, The Elizabeth Smart Story unfolds as one of the most remarkable, emotional and bizarre true crime stories ever told.
Speck: The true story of Richard Speck, a serial killer who raped and murdered eight young nursing students in Chicago.
The Six Degrees Of Helther Skelther: A hauntingly unique retelling of the notorious Manson Family Murders featuring original music recordings, rare vintage photos and never-before-seen autopsy reports.
Dc Sniper’s Wife: The true story of John Allen Muhammad, The D.C. Sniper, as told by his ex-wife Mildred.
Winter Of Frozen Dreams:
A bright student-turned-prostitute (Thora Birch) must outsmart the men who control her in this ripped-from-the-headlines thriller.
VIDEO VOYEUR: In this true story, Susan Wilson (Angie Harmon) discovers that her overly-friendly neighbor planted cameras in her home, capturing her most intimate moments on tape.

The Vampire Lovers (1970): A female vampire ravages the young girls and townsfolk of a peaceful hamlet in eighteenth century Europe who, years earlier, killed off her fellow vampires. A rousing hunt for the vampiress ensues as a group of men follow her bloody trail of terror through the countryside. Starring Ingrid Pitt, George Cole and Peter Cushing.
The Bat People (1974): The bite of a bat causes an idealistic doctor to begin a horrifying transformation into a half man, half bat creature-and no one is safe from his rampage.
The Screaming Skull (1958): A recently married woman begins to believe that she s losing her mind in this spooky thriller.
The Vampire (1957): Another unfortunate doctor has a bad run in with bats in this sci-fi flavored horror. After mistakenly ingesting some pills made from bat s blood, the good doctor finds himself turning into a terrifying creature of the night.

A collection of the most terrifying, brutal, and gory slasher films from Anchor Bay. This 4-movie collection includes the Unrated Slasher masterpiece Hatchet, WWE Film’s No One Lives starring Luke Evans, the film that stunned festival audiences around the world – A Horrible Way to Die, and The Alphabet Killer starring Eliza Dushku. Sit back, relax, and get ready to get SLASHED!

Let Me In, The Crazies, Apollo 18, Padnorum