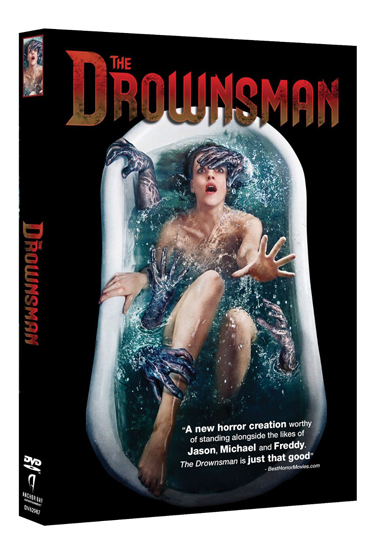 Synopsis: After almost drowning in a lake accident, Madison (Michelle Mylett, Antisocial) develops hydrophobia: an abnormal fear of water. After shutting the world and her friends out for over a year, her friends attempt an intervention. But, instead of curbing Madison’s fear, they unknowingly unleash something far worse: The vision of serial killer turned supernatural psychopath Sebastian Donner known as The Drownsman who begins to stalk the women one by one, dragging them into a lair of submerged torment from which there is no escape.

Synopsis: In her final year at school, Anthropology student Lorraine decides to film her final project – the subject of exorcism within the Catholic Church. Recording interviews with priests from the local diocese, she stumbles upon Fr. Byrne, an older priest who is currently helping a young mother whose daughter is apparently possessed by a demonic force. The curiosity of Lorraine, along with her camera operator, Cathal, leads them down a dark path of discovering the terrifying truth, and things go from strange to worse as all involved become entangled into a frightful journey to save a little girl’s life.

Synopsis: From The Vicious Brothers, the creators of Grave Encounters, comes a pulse-pounding encounter of the deadly kind.

Still reeling from her parents’ divorce, April (Brittany Allen, Dead Before Dawn) is dragged by her boyfriend (Freddie Stroma, Harry Potter & The Half-Blood Prince, Pitch Perfect), and a group of his friends back to the cabin where she spent summers as a child. Her trip down memory lane takes a dramatic and terrifying turn when a fireball descends from the sky and explodes in the nearby woods. The group venture out to the crash site and discover the remnants of a ship from another planet, along with footprints that suggest its alien occupants are still alive. They soon find themselves caught in the middle of something bigger and more terrifying than anything they could ever imagine.

X: The Man with the X-Ray Eyes

Synopsis: Dare To Look Into The Eyes Of Madness! Fantastic tale of heart-pounding suspense, this harrowing and terrifying sci-fi shocker will fascinate horror film fans. Starring Ray Milland (The Premature Burial), it charts the startling transformation of a doctor so blinded by ambition that he dares to glimpse eternity! When the brilliant Dr. Xavier (Milland) concocts a serum to improve human sight, he stumbles upon a formula for x-ray vision. Inspired by its awesome medical potential, but shunned by his short-sighted colleagues, the doctor tests the potion on himself, only to discover that his ability to see through walls, clothing and flesh is slowly eclipsed by and insatiable desire to look still further – even if it means seeing more than any mortal can bear! Featuring wonderful direction by the great Roger Corman (Tales of Terror) and a strong supporting cast that includes Harold J. Stone (The Wrong Man), John Hoyt (Blackboard Jungle) and comedy legend Don Rickles (Run Silent, Run Deep).

Synopsis: At a mountain resort, a local resident is possessed by the evil spirit of an ancient mountain man, and terrorizes a ski lodge.

She Killed In Ecstasy

For his follow-up to VAMPYROS LESBOS, writer/director Jess Franco delivered perhaps his most twisted shocker of the 70s: In what fans and critics consider to be her greatest role, the luscious Soledad Miranda in one of her final performances before her tragic death stars as the vengeful widow who seduces then murders the men and women responsible for her husband’s suicide. Howard Vernon (THE AWFUL DR. ORLOFF), Paul Muller (BARBED WIRE DOLLS), Ewa Strömberg (VAMPYROS LESBOS) and Jess himself co-star in this EuroCult classic featuring another epic sexadelic lounge score by Manfred Hübler & Siegfried Schwab now remastered in HD and featuring all-new Extras. It s Franco at his perversely erotic best, like you ve never seen or heard it before!

Stephen Thrower On She Killed In Ecstasy: Interview With Author Of Murderous Passions

The Delirious Cinema of Jess Franco

Synopsis: Edgar Allan Poe’s Chilling Tale of a Fate Too Horrifying to consider! The classic style of literature’s most bizarre author, Edgar Allan Poe (The Oblong Box), comes to life in this ghoulish tale of murder and suspense starring acting great Ray Milland (X: The Man with the X-Ray Eyes) as Guy Carrell, a medical student and painter whose obsessive fear of being buried alive compels him to build himself a tomb with a view, equipped with everything he can think of to escape death. But it’s when his long-suffering wife Kate (Heather Angel, The Informer), convinces him to destroy the tomb… he finds himself in the gravest of danger, trapped in a web of doom so devious and intricate that there’s no escape. Produced and directed by the iconic Roger Corman (The Secret Invasion) and beautifully shot in widescreen by the legendary cinematographer Floyd Crosby (Tales of Terror). The top-notch supporting cast includes Hazel Court (The Masque of Red Death), Alan Napier (TV’s Batman) and Dick Miller (Gremlins).

Lilith, A Vampire Who Comes Back

Synopsis: Lusilla Helm has to marry against her will baron Ludwig Von Reder. But her honeymoon does not last very long. The poor girl dies and is buried inside the family. After a short while, another girl announces herself at the doors of the baron’s mansion. Her looks recall Lusilla’s but in a disturbing way. As soon as the mysterious girl sets foot in the rooms where the baron’ former wife used to live, strange noises and happenings start to haunt the silent halls of the house.

From Jess Franco, the filmmaker The Vatican called the most dangerous director in the world, comes the most celebrated movie of his legendary career: Stunning Soledad Miranda stars as a vixen vampire who lures women to a Mediterranean island to satisfy her insatiable lust for female flesh and blood. It’s a mind-bending odyssey of surreal erotica and 70s EuroHorror, featuring the psycho-sexadelic soundtrack that remains a global phenomenon. Ewa Strömberg (SHE KILLED IN ECSTASY), Dennis Price (VENUS IN FURS), Paul Muller (NIGHTMARE CASTLE) and Franco himself co-star in this landmark cult classic, now remastered in HD and featuring all-new Extras filmed with the director shortly before his death. Experience Franco’s masterpiece like you’ve never seen or heard it before!

The Delirious Cinema Of Jess Franco

Synopsis: Even in the face of annihilation by the invading BETA forces, the persistent hostilities between the surviving nations continue to undermine mankind’s chances for survival. Desperate to gain the Type 99, the Soviet Command puts not only their own pilots, but the rest of the human race on the firing line as they sabotage the Kamchatka base self-destruct codes in an attempt to salvage the railgun for their own purposes. Caught in the crossfire, Yuuya, Yui and the other TSF pilots must fight their way to safety through a nightmarish series of traps and counter-traps before the base is bombed or the BETA take them all. Only a series of heroic sacrifices can save them, and that’s just the beginning of the danger. The mysterious arrival of an unidentified TSF and an escalating competition to dominate the new world’s power and military structures ignite a new chain of events that further threaten to undercut humanity’s chances. The war of the worlds continues and only the blood of heroes can save the earth in MUV-LUV ALTERNATIVE: TOTAL ECLIPSE COLLECTION 2!