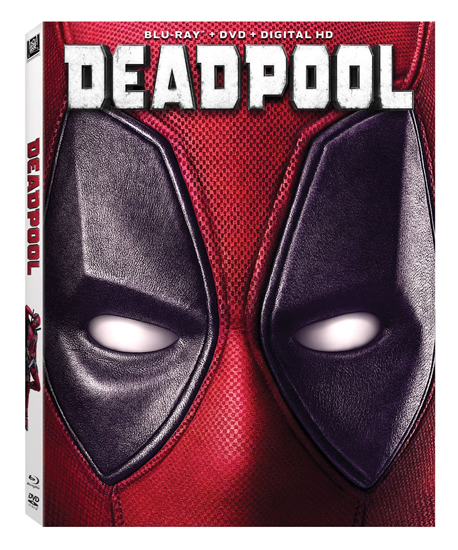 This week’s horror highlights include: the gory and hilarious Deadpool; The Boy, which stars Lauren Cohan (The Walking Dead); and the awesome indie film Sheep Skin.

You can view the complete list of this week’s horror releases below.

**From Comics to Screen…to Screen

Synopsis: The Boy is a frightening thrill ride directed by William Brent Bell (The Devil Inside) starring Lauren Cohan (“The Walking Dead”). Greta (Cohan) is a young American woman who takes a job as a nanny in a remote English village, only to discover that the family’s 8-year-old is a life-sized doll that the parents care for just like a real boy, as a way to cope with the death of their actual son 20 years prior. After violating a list of strict rules, a series of disturbing and inexplicable events bring Greta’s worst nightmare to life, leading her to believe that the doll is actually alive.

Synopsis: What starts as a YouTube video going viral, soon leads to problems for the teenagers of Lakewood and serves as the catalyst for a murder that opens up a window to the town’s troubled past.

Synopsis: Minnesota, 1990. Detective Bruce Kenner (Ethan Hawke) investigates the case of young Angela (Emma Watson), who accuses her father, John Gray (David Dencik), of an unspeakable crime. When John unexpectedly and without recollection admits guilt, renowned psychologist Dr. Raines (David Thewlis) is brought in to help him relive his memories and what they discover unmasks a horrifying nationwide mystery.

Synopsis: Why did they fear Francesca’s baby?

Oscar winner Patty Duke stars in the tense and claustrophobic psychological thriller, You’ll Like My Mother.

When her husband is killed in Vietnam, Francesca Kinsolving (Duke) finds herself alone… and pregnant. She makes her way to Minnesota in order to meet her late husband’s mother, certain that she’ll be greeted with open arms. But Francesca soon discovers that there may be more to the Kinsolving family than she ever imagined… and that this simple family reunion is only the beginning of a waking nightmare.

Rosemary Murphy (To Kill A Mockingbird), Richard Thomas (The Waltons), and Sian Barbara Allen (who was nominated for a Golden Globe for her performance) also star in this “intriguing, tautly directed thriller [that delivers] a high level of terror and tension”, (TV Guide)!

Perfume of the Lady in Black [Blu-ray]

Synopsis: Director Francesco Barilli’s hallucinatory giallo horror-thriller stars Mimsy Farmer who portrays Sylvia, a chemist who begins to suffer from strange visions; a mysterious woman in black applying perfume in a mirror appears to her and strangers follow her everywhere she goes. Barilli’s psychological investigation into the workings of the mind becomes apparent when it is revealed that as a child, Sylvia committed a horrible crime. The slow progression from successful scientist to a woman on the verge of insanity shows an in-depth look at the intricacies of the haunted mind. This is a remarkable film, weaving reality, fantasy and memory into an almost seamless fabric.

Synopsis: When Daniel is lured to an isolated island guesthouse by his new on-line girlfriend Kelly, his hopes for a romantic weekend get-away are quickly shattered. As other guests around the estate begin to disappear, he suspects that she or her monstrous sisters may have a gruesome menu planned for their dinner. Now he and a friend race to escape this wicked trap hoping to survive beyond the dawn.

Synopsis: For decades, obscure film collectors and lovers of esoteric cinema have sought it… Finally, the search is over… Originally broadcast live on October 31, 1987, the WNUF Halloween Special is a stunning exposé of terrifying supernatural activity that unfolded at the infamous Webber House, the site of ghastly murders. Local television personality Frank Stewart leads a group of paranormal investigators including Catholic exorcist, Father Joseph Matheson and the prolific husband-and-wife team Louis and Claire Berger. Together, the experts explore the darkest corners of the supposedly haunted Webber House, trying to prove the existence of the demonic entities within. Did they find the horrific truth or simply put superstitious rumors to rest?

With a unique spin on the vampire genre, full of camp, heavy synth music and thought-provoking horror, Vampires is the perfect timestamp of 80’s schlock cinema. The film takes us to a stately private school where something is amiss with the student body. Ione (Orly Benyar) is excited to begin the next chapter of her life when she is awarded a scholarship to attend a prestigious art school at the Abadon estate… which also happens to have a distant history of working with the criminally insane. Soon after arriving at the school, she realizes that there are some missing students that no one can seem to account for. While searching for answers, Ione encounters Dr. Charles Harmon (Duane Jones, the doomed hero from horror classic Night of the Living Dead), who begins to tell her about Madeline Abadon (Jackie James) and her quest to suck the youth from the student body in order to gain immortality. Charles is then encumbered with the harrowing task of disarming Madeline and her “mad scientist”machine, but will he be able to end the demonic evil on campus before it’s too late? Originally filmed as the second part of the 1989 cult anthology classic, Fright House, this would be Len Anthony’s last film. Principal cinematographer Ernest Dickerson went on to shoot Spike Lee’s Do the Right Thing and direct several episodes of the classic horror TV series, The Walking Dead.

Synopsis: One dark and stormy night the tax man pays a visit to an eccentric horror fan who keeps the unwelcome guest distracted by telling him 4 tales of terror from the stories of Joe R. Lansdale, Edgar Allan Poe, Lafcadio Hearn and Jeff Strand.

Synopsis: SHEEP SKIN is a gritty and realistic take on the werewolf sub-genre. The film centers around a group of friends in a punk rock band, who kidnap a business man because they believe he is actually a werewolf hiding in plain sight. The group takes the man to a nearby warehouse, where they have one night to prove that their suspicions are true. As the night goes on, tensions mount and the group begins to question their own motives. Are they right about the man’s true identity, or have they made a terrible and deadly mistake? Bonus features include: Original Short Film, Werewolf Reference Guide, Stills Gallery, Trailers, Audio Commentary, Deleted Scenes, Behind the Scenes Featurette, Color version of the film, B&W version of the film

Synopsis: A game designer on the run from assassins must play her latest virtual reality creation with a marketing trainee to determine if the game has been damaged.

Synopsis: The Tough Titty is a strip club that’s seen better days. But tonight it’s gonna see a whole lot worse. Spider has been losing money on his business for years. Now it’s finally getting the traffic he’s always wanted… unfortunately, most of his patrons are undead. With a sudden outbreak of the zombie virus, Vanilla, Bambi, and Sugar Hills deal with the disaster the way only a stripper can. Blood and braziers go flying, in this exciting horror-comedy.

Synopsis: A double-dose of zombie chills and thrills on one DVD!

Zombie Field Trip: A typical college field trip for a group of Botany students turns into the field trip from Hell when they discover they are not only stranded, but are in the midst of a host of dead walkers reanimated by an evil scientist hell-bent on turning the world into a Zombie Armageddon. The grisly nightmare of carnage and horrifying abominations abound until every last student is consumed!

Zombie Slaughterfest: When the Earth is blasted with radiation from solar flares, a strange virus emerges effecting 99% of the world’s population, turning them into flesh eating cannibals. A group of shell shocked survivors try to survive by banding together but grow weary as the rotting undead multiply and grow more ravenous each day with an unquenchable need to consume the living!

Synopsis: Two death-obsessed women embark on a violent and ruthless killing spree, fueled by a mutual hatred against all men, all the while pursued by a mysterious detective, who may or may not be on their side. A Nihilistic, misanthropic character study of modern morality and sheer slasher terror.

Synopsis: Now the legacy can be told… The history of horror began when Andre Toulon, a benign toymaker, became the master of a group of killer puppets. It’s a tale of sorcery, death, resurrection and deadly revenge as told by Eric Weiss, a young boy who was once protected from Hitler’s SS by Toulon. Weiss, now a grown man, has spent his life trying to perfect Toulon’s secret of giving life to the inanimate. In comes Maclain, a rogue agent who wants to peddle the secret on the open market. Maclain breaks into Weiss’ lab, shoots and tortures him, but Weiss will not give up the secret. The tale unfolds, weaving new footage with flashbacks from previous Puppet master films as it becomes a battle of wills between Weiss and Maclain. The new puppet master remains defiant as the assassin moves in for the kill, unaware that Weiss has found the secret and Toulon’s puppets are ready to shed blood for their master again… Time itself seems to stand still as the present meets the past, and the bloody legacy of the murderous puppets is revealed in an act so shocking that it may destroy the very souls of all involved! The popular and exciting Legacy of the PUPPET MASTER continues.

Synopsis: Two childhood friends, Jess and Susan, awaken to find themselves chained in a cell after their sons have been kidnapped. They soon learn that the man who abducted them, Valentine, has terrifying intentions and a sadistic ritual to complete. Meanwhile, Father Albert finds clues to the plans for this diabolical ritual, decades in the making. As Valentine takes his two captives on a journey into pain, hatred, and violence, Father Albert begins his mission to rescue the women and children, before it is too late.

Synopsis: The cookie mini-murderer, The Gingerdead Man, is back again–and this time he’s leaving it all out on the dance floor…he is the ultimate roller BOOGIEMAN! After escaping from jail, The Gingerdead Man finds himself in a time machine headed for 1976. He arrives in the middle of a roller-boogie contest…but the party is just getting started for the infamous cookie killer. After taking in the sights of the beautiful roller girls, Gingerdead gets back to his old murderous ways, causing more bloody mayhem than ever before, but this time, on the dance floor! Its SATURDAY NIGHT CLEAVER time…so you better KEEP STAYING ALIVE!

Jezebeth 2 Hour Of The Gun

Synopsis: It’s the year 1881 and the outlaw vampires Jezebeth Wyck and Billie Gunn, are now bitter enemies and have parted ways after a human child is gunned down in cold blood. Now after 130 years that same child is a vampire who slowly begins to show signs of being telekinetic. The child creature (Abigail) is used by the outlaw Billie Gunn as bait to lure Jezebeth back to the land where it all began for a bloody final showdown Bonus features include: Exclusive Preview of Jezebeth 3 The Guns of El Diablo, Dead is Better ‘Music Video’, Scene Selection Page, Trailers, 3D Panoramic Motion Menu

‘The New Mutants’ Teaser Scares Ahead of Release