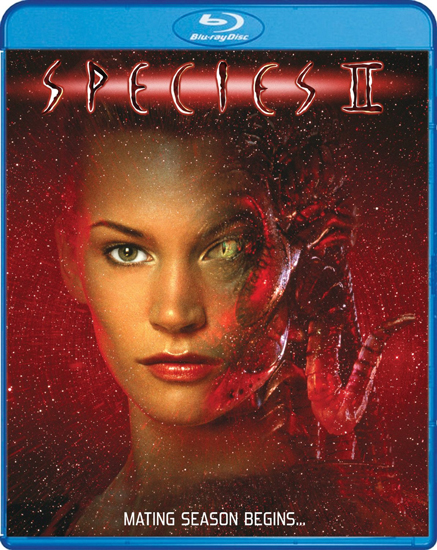 Synopsis: An astronaut gets infected with alien DNA during the first mission on Mars and runs amok on earth. Preston and Laura team up with a peaceful, genetically re-engineered Sil to track the monster down.

-“From Sil To Eve” – an interview with actress Natasha Henstridge

-Scenes from the film featuring uncut footage not shown in theatres

Synopsis: The Tribe is an undeniably original and intense feature debut set in the insular world of a Ukrainian high school for the deaf. The Tribe unfolds through the non-verbal acting and sign language from a cast of deaf non-professionals, resulting in a unique, never-before-experienced cinematic event that engages the audience on a new sensory level.

Teenage Sergey (Grigoriy Fesenko), a new student at the boarding school, realizes immediately that he must prove himself worthy to be brought under the protective wing of the school gang’s leader to survive unscathed. After an indoctrination of harmless initiation pranks and rites, Sergey’s new-found clique soon introduces him to their common activities of robbery, bribery and prostitution. At first assimilating seamlessly into his new role in the tribe, he finds himself compromised as he begins to fall in love with his female classmate and one of the gang’s escorts triggering a sequence of stunningly diabolical events.

Species III : Sara (Sunny Mabrey), the daughter of Eve (Natasha Henstridge) begins her mission to mate with humans, while a specialist military team hunt her down to kill her before its too late.

Species: The Awakening: Dr. Hollander, a scientist, takes his niece Miranda to Mexico in an attempt to reverse the effects of the alien DNA he used to create her. However the treatment goes horribly wrong, and it sets Miranda on a killing spree as she sets out to find a mate.

Synopsis: A gay mixture of DEXTER and GILMORE GIRLS blending witty banter, pop culture references and good old-fashioned murder! George, a narcissistic wannabe internet star, starts dating Joe, a monotone serial killer. While all of George s friends agree that Joe seems a bit strange, George claims his new beau is not scary, he is gorgeous.But as George s friends start to disappear, the remaining group decides to take matters into their own hands.

They Came From The Ether

Synopsis: John Henry, a down on his luck salesman, is given a chance to succeed when alien visitors arrive and coerce him into helping with their human experiments in exchange for technology that will radically change John’s life. Blinded by his ambition, John inadvertently opens a doorway in which the aliens can realize their sinister goals of controlling the human race. As more and more people vanish, it’s left to Missing Persons Detective Mike Washburn, to get to the bottom of things in this 1950s style sci-fi thriller.

Synopsis: Ben & Annie are a young couple living in Chicago, on a weekend trip to Annie’s small North Carolina hometown. At the local bar they run into Paul, a charming old friend of Annie’s, and Ben learns something he never knew about his girlfriend: She believes in Bigfoot. In fact, she and her friends used to hunt for the creature when they were kids. Before Ben knows it, he’s off on an impromptu Squatchin’ trip deep in the Carolina backwoods. Amidst the Squatch calls, campfire stories and beers, Ben quickly realizes that Paul may have an ulterior motive in bringing Annie to the woods. And something else out here seems to be after her as well. Everyone but Ben thinks its Bigfoot. But it can’t be, can it? After all, Bigfoot isn’t real…

Flesh For The Inferno

Synopsis:  At a local Catholic school, the nuns have noticed that the priest is doing more than just leading his students in prayer. Not content to stand idly by as evil walks their halls, the Sisters decide to take action. Confronted by the nuns about his wicked ways, the priest retaliates. For defying him, the Father takes the Sisters hostage and bricks them into the walls of the school’s basement. The sadistic and fatal punishment shakes the faith of the women, forcing them to renounce their holy vows in the moments before their demise. How could they continue to believe in a power that would allow them to suffer such a fate when they were merely trying to do what’s right? Decades later, the school is now vacated and in a state of disrepair. Selected by the community as a building marked for urban renewal, a neighborhood youth group has volunteered their afternoon to come clean up the premises and prepare it for construction. However, when the motley crew accidentally uncovers the blasphemous tomb in the basement, the nuns return…and Hell follows. Trapped inside the building, the members of the youth group fight for their lives to flee the wronged nuns, who now lurk the halls as damned Sisters of perdition. All the while, the school itself starts twisting and distorting, becoming a mad nightmare that just may prove to be a gateway to a world beyond. With blood on their hands and revenge on their minds, the nuns won’t stop until they have…FLESH FOR THE INFERNO!

Devil Knows His Own, The

Synopsis: A man suffering from psychotic delusions may be possessing the women in his life, until a priest is dispatched to put an end to his reign of terror.

Escape From The Insane Asylum

Synopsis: After being committed to a sanatorium by her wealthy husband, a rich heiress is on a race against the clock to prove her sanity and to expose the savage medical experiments that are being performed in the asylum.

Massacre Video, in collaboration with Vinegar Syndrome, presents the obscure Escape From The Insane Asylum on DVD for the first time ever, staring legendary cult writer / producer / actress Renee Harmon (Frozen Screams, Cinderella 2000, The Executioner 2, and many other classics).

Trailers for Other Massacre Video Releases

Synopsis: Charles a former best selling writer, is desperately trying to pen his next book and needs a place free of distractions. Little does he know, his entire family is being watched. Strange bumps in the night escalate into a nerve wrecking encounter with the creature by Charles’s wife Linda. The story takes a wacky turn when they hire a psychotic, pest-control guy and are led to believe Rabid Beavers are to blame. It’s not until they visit a road-side Root Beer Distillery and meet a man named Ned Perkins, that they learn what the bumps in the night really are. According to Ned, they’re all going to die!

Synopsis: When their car breaks down on the way to their honeymoon destination, newlyweds Debbie and Tom are taken in by Lincoln, a mysterious stranger with sinister intentions. That evening, Lincoln reveals himself to be a demon and seduces Debbie into brutally murdering her husband. Now she faces a series of carnal and violent challenges in order to join him and become immortal. She must seduce a business man, tempt a young innocent woman at a nightclub and slaughter her way through innocent strangers to become one of Satan’s chosen few. Starring Sophie Austin (Hollyoaks) and Mitch Powell (Saint Dracula 3D).

Synopsis: A group of teens explore an abandoned factory at the request of one of their friends – but little do they know he is leading them to a slighter at the hands of his mentally deranged mother.

Synopsis: Two strangers must discover a way to escape a sinister family who wishes to sacrifice their souls to an evil presence. Bonus features include: Interactive menus/trailer

Synopsis: Julie always dreamed of being an actress, so when an audition finally comes around for a new horror feature The Orgasmic Dead, she can’t believe her luck. What she doesn’t know is that the filmmakers have other ideas about her 15 minutes of fame. Upon finding herself in a strange situation, Julie is struck in the head only to awaken tied to a chair and ready to become the subject of a snuff film. As the filmmakers become competitive with each other, and tensions further boil, Julie becomes prey to a vulgar, deranged and twisted journey. Fluid Boy is snuff like you’ve NEVER seen it before – weird, offensive, vomit inducing humiliation on an unprecedented level.

Synopsis: Classy, Trashy, and Sexy as HELL, this amazing collection of Bad *** Bitches will blow your mind as these babes kick *** and take names exacting revenge from those who have abused and humiliated defenseless females. Whipped, Chained and Tortured by a Psychopath To escape her abusive foster home, Danielle hitches a ride with a psycho who has an axe to grind against women. She realizes she’s been abducted when she awakens half-naked, chained to a post in his basement. Ancient Demon Succubi An ordinary woman is possessed by an ancient Demon that takes over her body, her mind and soul. Driven to bring revenge upon mankind’s reign, the Demon unleashes its minions torturing man after man beyond all comprehension.

Synopsis: All Ivy Winters wanted was to be a model. After meeting with a potential agent, it seemed like her career was finally on the right path. But she soon finds herself drugged and humiliated. With her life spiraling out of control, Ivy is on the fast track to destruction. When tragedy strikes, she quickly realizes it’s time to enact bloody revenge on those who destroyed her dreams. It’s time for a little…Bikini Mayhem!

Synopsis: A disillusioned woman tries to gain control of her life as the people closest to her begin to die mysteriously.

I Spit on Your Grave 3-Pack

Jennifer Hills (Sarah Butler), a writer, rents an isolated cabin in the country so she can work on her latest novel. The peace and quiet is soon shattered by a gang of local thugs who rape and torture her, then leave her for dead. But she returns for vengeance, trapping the men one by one, and inflicts pain on her attackers with a ferocity that surpasses her own ordeal.

When aspiring model Katie Carter (Jemma Dallender) innocently accepts an offer to have new photos taken for her portfolio, the experience quickly turns into a nightmare of rape, torture and kidnapping. Now, she will have to find the strength to exact her brutal revenge.

Jennifer Hills (Sarah Butler) is still tormented by the brutal sexual assault she endured years ago. She’s changed identities and cities, reluctantly joining a support group where she begins to piece together a new life. But when her new friend’s murderer goes free and the tales of serial rapists haunt her, Jennifer will hunt down the men responsible and make them pay for their crimes in the most horrific ways imaginable.

Synopsis: The town of Liberty has many secrets but the darkest is hidden between twin brothers. Vincent and Oscar Burton are only 10 years old when Oscar finds out his parents are trying to kill him for insurance money. Oscar takes it in to his own hands to protect himself and his twin.

Curse Of The Puppetmaster

Synopsis: The human experiment… The amazing living puppets of Andre Toulon have a new master. In a desperate attempt to duplicate the great Puppet Master’s work, Dr. Magrew has been experimenting with his human assistants, but Hell is about to break loose. As captives in Dr. Magrew’s House of Marvels, the puppets have watched silently as lives have been destroyed with every failed experiment. Now, the deadly puppets’ hunger for revenge is the only way to stop the legacy of evil…