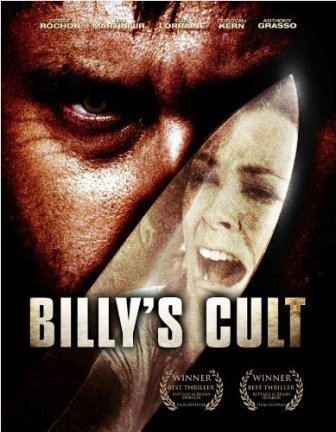 Another moderate week in DVD and Blu-ray land, fiends.  This week sees the release of The Last Days On Mars as well as the DVD and Blu-ray release of 1979’s The Visitor.  In total there are 10 movies and 1 collection for you to drool over.  Enjoy!

Billy is a demonic soul that channels his hatred straight from the devil. He uses his butcher shop to carve his kills and dispose of their remains. As more bodies are discovered throughout Southern New Jersey, Detective Gates and Detective Steele try to solve the mystery. Anyone that gets in Billy’s way is brutally murdered. Even though the state police think they have solved crime, the murders continue and it is soon realized, that there is much more to these killings. Nobody is safe from Billy’s wrath, not even the detectives themselves. The Cult following shall commence.

When a small town is overcome with a blood lust the local witch doctor is thought to be the source. What they don’t know is that he has a different agenda. Five friends fight for their lives when there seems no escaping from the town and the virus that follows them. One by one the sickness tries to take a hold of them and no-one knows who is infected and who is safe.

Bloodlust is a horror/thriller film about a group of young adults who visit a tropical island only to become prey for a sadistic hunter. Filmed in 1959 and released in 1961, the film was featured on Mystery Science Theater 3000 in September 1994. Two couples (Robert Reed, June Kenney, Joan Lora, and Eugene Persson) are on a boating trip when they come across an uncharted island. They soon find the island is inhabited by a wealthy recluse and his staff. While their host is initially hospitable, the four investigate and find themselves in the clutches of Dr. Albert Balleau (Wilton Graff), whose hobby is hunting both animals and humans. He quickly reveals his true purpose: to hunt down and kill each of his visitors, as he has done with everyone unlucky enough to set foot on his island.

Simon Leach is a very sick man. Thriving on despair, pain, and panic, he unites a group of broken and desperate teens and showers them with the love and affection they’re so desperate for. But Simon has a much darker plan for his followers. “Belongingness” can be a terrifying subject. When a young woman embeds herself in the cult looking for answers to her sister’s disappearance, she discovers their dark secret and an even darker secret within herself.

At a remote medical facility, a group of seven strangers begin a clinical trial for the experimental new drug: Pro-9. As the untested drug begins to course through their veins, unexpected side-effects start to take hold and several of the volunteers are sent into an uncontrollable murderous rage.

This wild horror comedy is comedian Dan Fogler’s (Balls Of Fury, Europa Report) directorial debut. Thrills, kills, and laughs abound as a theater troupe of horny teenagers are murdered one by one in the woods. The group embarks on a retreat to Moon Lake and soon discovers it’s the one place on Earth that holds the strongest amount of insanity-inducing lunar radiation. As the confused thespians die in droves, the survivors wonder who is the killer among them? Did the lunar radiation turn one of the actors into a blood-thirsty psychopath? This splatter-fest homage to Alfred Hitchcock is a Tribeca Film Festival breakout and features cult comedian Gilbert Gottfried (The Problem Child, Aladdin) alongside Noah Bean (TV’s Damages) and Lennon Parham (TV’s Funny Or Die Presents…).

On the eve that the crew of the very first manned expedition to Mars is about to return to Earth, it makes an astounding discovery fossilized evidence of life on Mars. Oscar® nominated and visionary filmmaker Ruairí Robinson, along with an extraordinary special effects team including the people behind District 9, X-Men: First Class and Avatar, introduce us to a terrifying new landscape, where the scientific discovery of life might be the death of us all.

A group of recent college grads on a final camping trip together pursue their own agendas when it comes to relationships but must put aside their differences and try to survive when one of them disappears and something in the forest starts killing the rest.

Mild mannered janitor W.C. must learn to adapt when a zombie outbreak is unleashed while he is cleaning the women s washroom. Aided by the voice of the mysterious Evie, he will have to face his fears and use any means necessary to take down the zombified versions of his former co-workers in this outrageous and sexy zombie comedy.

In this unforgettable assault on reality–fully restored and presented completely uncut theatrically for the first time ever in the U.S.–legendary Hollywood director/actor John Huston (The Maltese Falcon; Treasure Of The Sierra Madre) stars as an intergalactic warrior who joins a cosmic Christ figure in battle against a demonic 8-year-old girl and her pet hawk, while the fate of the universe hangs in the balance. Multi-dimensional warfare, pre-adolescent profanity and brutal avian attacks combine to transport the viewer to a stat unlike anything they’ve experienced… somewhere between Hell, the darkest reaches of outer space, and Atlanta, GA. The Visitor fearlessly fuses elements of The Omen, Close Encounters Of The Third Kind, The Birds, Rosemary’s Baby, The Fury, and even Star Wars, creating the most ambitious of all ’70s psychedelic mindwarps. Its baffling all-star cast includes Shelley Winters (Night Of The Hunter), Glenn Ford (Superman), Lance Henriksen (Aliens), Franco Nero (Django) and Sam Peckinpah (director of The Wild Bunch).

Doom: A frantic call fro help from a remote research station sends a team of mercenary Marines, led by The Rock and Karl Urban, to Mars where they find a legion of nightmarish creatures killing at will.

Pitch Black: When their ship crash-lands on a remote planet, the marooned passengers soon learn that escaped convict Riddick (Vin Diesel) isn’t the only thing they have to fear.

Serenity: When the renegade crew of Serenity agrees to hide a fugitive on their ship, they find themselves battling against a totalitarian regime who will destroy anything – or anyone- to get the girl back.

Hellboy II: The Golden Army: With the fate of mankind in the balance, it’s up to Hellboy and his team of paranormal outcasts to face off with the forces of darkness in the ultimate battle of good versus evil!