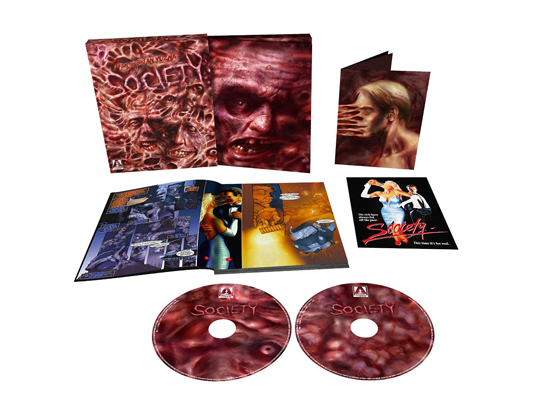 Synopsis: The teenager Bill Whitney (Billy Warlock) feels misfit with his parents and his sister Jenny Whitney (Patrice Jennings). When his sister’s boyfriend David Blanchard (Tim Bartell) bugs his family, he shows the disturbing tapes to Bill showing incest and a weird society. When Blanchard dies in a car accident, Bill decides to investigate his family and find a scary truth.

* Optional English SDH subtitles for the deaf and hard of hearing

* Governor of Society – a brand new interview with Yuzna

* The Masters of the Hunt – a brand new featurette including interviews with stars Billy Warlock, Devin DeVasquez, Ben Meyerson and Tim Bartell

* Brian Yuzna in conversation backstage at the Society world premiere

* Society: Party Animal [Limited Edition Exclusive] – the official comic sequel to Society, reproduced in its entirety in a perfect-bound book

Synopsis: Welcome to Camp New Horizons, where an autumn retreat brings together a group of obnoxious rich kids and surly city thugs for an “experiment in sharing. “, Under new inept management, this is the ideal setting for notorious psychopath Angela Baker (Pamela Springsteen, Sleepaway Camp II: Unhappy Campers) to join the camp and do what she does best: eliminating “immoral”, teenagers with everything from a knife to a lawnmower. Michael J. Pollard (House of 1000 Corpses, Bonnie & Clyde), Tracy Griffith (Fear City, The First Power) and Jill Terashita (Night of the Demons) co-star in this third installment of the cult series.

Five years after the horrific slaughter at Camp Arawak, Angela (Pamela Springsteen, Fast Times at Ridgemont High) has created a new position for herself as a counselor at Camp Rolling Hills. Angela is about to teach “bad campers”, a brutal lesson in survival when they are sliced, stabbed, drilled… and much worse. Renée Estevez (Heathers, Intruder) and Walter Gotell (The Spy Who Loved Me) co-star in this outrageous sequel to the original cult classic.

Synopsis: A thriller that tells the story of Dr. Ephraim Goodweather, the head of the Center for Disease Control Canary Team in New York City. He and his team are called upon to investigate a mysterious viral outbreak with hallmarks of an ancient and evil strain of vampirism. As the strain spreads, Eph, his team, and an assembly of everyday New Yorkers, wage war for the fate of humanity itself.

Synopsis: A caretaker devotes himself to three demented adults after their father’s death.

* High Definition Blu-ray (1080p) and Standard Definition DVD presentation of the main feature, available in the UK for the first time

* The Hatching of Spider Baby – Interviews with Jack Hill, Sid Haig, star Mary Mitchel, fan Joe Dante and more on the making of the film

* Spider Stravinsky: The Cinema Sounds of Ronald Stein – The composer of ‘The Terror’ and ‘Attack of the 50 Foot Woman’ among others is remembered by Harlene Stein, Jack Hill, American Cinematheque’s Chris D. and others

* Collector’s booklet featuring writing on the film by artist and writer Stephen R. Bissette, and an extensive article re-printed from FilmFax: The Magazine of Unusual Film and Television featuring interviews with the cast and crew

Synopsis: Cult Epics presents the third release in the series Corpse F##king Art; Jorg Buttgereit’s powerful masterpiece Der Todesking (aka The Death King), made in-between Nekromantik (1987) and Nekromantik 2 (1991). Seven stories on Death and Suicide, each taking place on a different day of the week, enframed by the decomposition of a human body. Warning: extremely graphic.

Der Todesking, available for the first time on Blu-ray, is presented Uncut and Uncensored in a new High Definition transfer, including the bonus Shockumentary Corpse F##king Art; an in-depth look behind the scenes of Nekromantik, Nekromantik 2 and Der Todesking.

The Making of Der Todesking

Synopsis: A shape-shifting cross-dressing psychopath wielding a samurai sword cuts a bloody swath of carnage through a small German village in this surreal mix of violence, sexual desire and dark comedy that recalls early David Lynch. The only person to confront this decapitating murderer is an uptight young policeman whose pursuit soon becomes a deadly game of cat-and-mouse as an odd bond forms between the two men. Completely bizarre yet wildly entertaining, DER SAMURAI is a horror must-see for the adventurous!

Synopsis: In this follow-up to his ground-breaking horror film The Awful Dr. Orlof, Jess Franco (Female Vampire, A Virgin Among the Living Dead) continued to lay the foundation of a career defined by fetishistic imagery and transgressive violence.

A series of grisly murders in the remote village of Holfen convinces the locals that the town is still cursed by the spirit of a 17th-century baron who maintained an elaborate torture chamber in the dungeon of his estate. Undaunted by the villagers’ superstitions, a detective (Georges Rollin) quickly focuses his investigation upon the creepy Max Von Klaus (Howard Vernon). Meanwhile, the youngest male descendent of the Von Klaus bloodline (Hugo Blanco) returns home to mourn the death of his mother, and must wrestle with his own connection to the cursed family history.

Synopsis: In June of 1994, one of the most brutal mass slaughters in history occurred in the backwoods of northern New England. Four months later, history is about to repeat itself. The end of summer signals the brink of manhood for a group of lifelong friends who proudly call New Hampshire their home. But when they embark upon a local rite of passage traveling north for one final weekend of debauchery together it just might prove to be their final weekend period, as this rite is doomed to go frightfully wrong. When they find themselves ensnared in a struggle for survival amongst a sinister hunting party, a bloodthirsty tribe and a mythical beast, what began as a comedy of errors devolves into an all-out Darwinian duel to the death, and less than 24 hours will pass before a slew of lives have been claimed and the last of the living remains.

Synopsis: Madison Sheffield is a former high fashion model whose career ended when she was horrifically disfigured by her ex-husband. Madison turns to a quieter life as a novelist, relishing the ability to impress with her mind rather than her looks. In researching for her latest book, Madison begins to find herself increasingly obsessed with the Fountain of Youth. After months of investigating she discovers the fountain’s location. While staying at a luxury villa rumored to be near the fountain, Madison finds herself the pawn in a twisted game with two mysterious and seductive men. Little do the three realize the residents of the villa have their own plans as an ancient evil is resurrected and threatens to destroy them all.

Synopsis: Nikos and his family are trapped during a heavy storm in a boat, leading to the unfortunate death of their daughter Vicky. Nikos becomes mad with the desire to survive, and he begins to kill and eat his own wife. Nikos manages to reach the shore of a small island, but his appetite for human flesh has consumed him. A group of young people on vacation have an unfortunate meeting with Niko. Will these youngsters make it out alive?

Trailers For Other Massacre Video Releases

Synopsis: A titular spider invasion occurs when what appears to be a meteorite crashes down in rural Wisconsin and spawns spiders of varying sizes. The invasion is deduced to be the result of some sort of interdimensional gateway, and is ultimately thwarted when Drs. Vance and Langer manage to close off the gateway, draining the spiders of their energy and causing them to melt into puddles of disgusting sludge.

Synopsis: Angie applies for a babysitting job and finds herself on a remote farm before the Stanton family and their little boy, Sam. Angie’s first night of work might just be her last when she must fight for her life to protect herself and the child. But is everything as it seems?

Babysitter Wanted turns the classic babysitter in peril horror story absolutely on its head. Suspenseful, funny, gory and defying expectations every step of the way, this is one of the most enjoyable and critically acclaimed roller coaster rides in recent horror cinema history.

Making Of The Movie

Synopsis: When a brilliant but obsessive scientist goes to extremes to develop a universal cure for all disease, he finds himself infected with a bizarre parasite that begins to transform him into a bloodthirsty madman. Time running out, and with the aid of his med student assistant, he must find a way to stop the monster that is growing within and prevent the rest of the world from being cured.