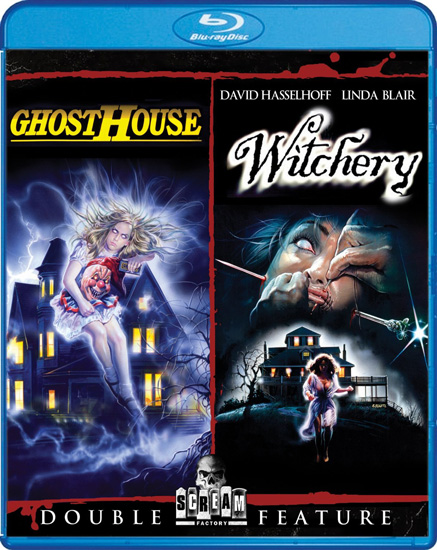 Synopsis: Clown dolls. Witches. Hasselhoff. What more could you want?

Prepare yourself for one of the most bizarre double bills imaginable with Ghosthouse and Witchery! Released in Italy as part of the infamous La Casa series, these two highly unusual horror films are essential viewing for fans of Cult Cinema.

Your tour of terror begins with Ghosthouse, in which a group of visitors to a seemingly-deserted home find themselves tormented by demonic spirits: including one particularly freaky little girl and her creepy clown companion. Soon, our hapless heroes find themselves powerless to conquer the evil of the Ghosthouse: where death holds the mortgage and if you move in… there’ll be Hell to pay!

Then, a new address brings new frights as the immortal David Hasselhoff and The Exorcist’s Linda Blair turn up the terror in Witchery. When a terrible storm leaves a motley assortment of people stranded on an island resort, they soon find they have more to worry about than not packing rain gear! A horrible witch unleashes her wrath on the unwanted visitors: and no one is safe from her unquenchable thirst for death!

Synopsis: Most moms are wonderful cooks, this one…likes it raw! Something’s been eating Clay Dwyer. His mom! Once a sweet lovable lady, she’s been bitten by and transformed into a flesheater, turning her into a hungry creature with a knack for good old homestyle cooking. What is Clay to do? To everyone else she’s a monster that must be destroyed. But to him she’s still MOM. Presented in beautiful 16:9 widescreen format.

Shriek of the Mutilated – Garden of the Dead Double Feature [DVD]

Synopsis: A double-dose of shock and terror await you as the Dead walk and Sasquatch stalks the living in this Wide Screen scream fest double-feature DVD. GARDEN OF THE DEAD (1972) tells the horrific tale of a gang of ruthless prisoners who, after being slaughtered in an attempted escape, return as zombies, hell bent on destroying the living. SHRIEK OF THE MUTILATED (1974) spins an even wilder yarn, as Bigfoot hunts a group of college students on a remote island off the coast of New York! From the creative force behind the cult classic Invasion of the Blood Farmers! Both features are presented in widescreen and the DVD has the following bonus features: original trailers, plus a GARDEN OF THE DEAD Commentary Track by Cult Filmmakers David DeCoteau and Fred Olen Ray.

After Midnight: Murder is the Ultimate Entertainment [DVD]

Synopsis: When someone murders Duffy (Jeneta St. Clair), a stripper at the Candy Cat Club, her sister Constance (Catherine Annette), a TV News Reporter, goes undercover to discover the killer’s identity and even the score. Urged to stay out of harm’s way by her shrink, Richard Grieco, she manages to get hired by the Club’s sexy manager, Tawny Kitaen, and soon finds herself in the middle of a string of bizarre killings, all made more macabre by the presence of her dead sister’s ghost. This exciting thriller stars Richard Grieco, Tawny Kitaen, Tim Abell, and Christine Nguyen. Bonus features: Directors Commentary Track with Fred Olen Ray and Original Trailer.

TRUE BLOOD chronicles the backwoods Louisiana town of Bon Temps… where vampires have emerged from the coffin, and no longer need humans for their fix. Sookie Stackhouse (Anna Paquin, Golden Globe(R)-winner for “True Blood”, Academy Award®-winner for “The Piano”) works as a waitress at the rural bar Merlotte’s. Though outwardly a typical young woman, she keeps a dangerous secret: she has the ability to hear the thoughts of others. Her situation is further complicated when the bar gets its first vampire patron – 173-year old Bill Compton (Steven Moyer, “Quills”) – and the two outsiders are immediately drawn to each other. Delivering the best of what audiences have come to expect from Creator and Executive Producer Alan Ball (writer of Oscar®-winning Best Picture “American Beauty”, creator of the Emmy® Award-winning HBO® series “Six Feet Under”), TRUE BLOOD is a dark and sexy tale that boldly delves into the heart – and the neck – of the Deep South.