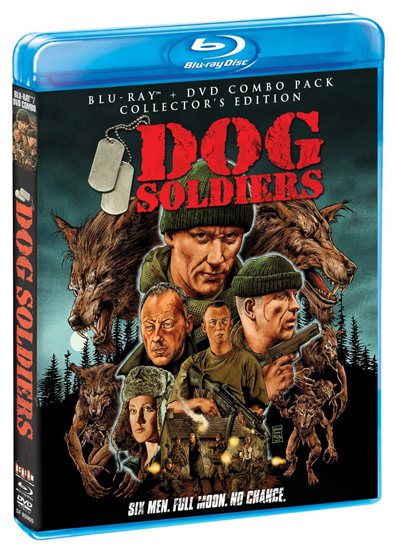 Synopsis: A group of soldiers dispatched to the Scottish Highlands on special training maneuvers face their biggest fears after they run into Captain Ryan: the only survivor of a Special Ops team that was literally torn to pieces. Ryan refuses to disclose his mission even though whoever attacked his men might be hungry for seconds. Help arrives in the form of local girl who shelters them in a deserted farmhouse deep in the forest…but when they realize that they are surrounded by a pack of blood-lusting werewolves, it’s apparent their nightmare has just begun!

Synopsis: A mysterious new shop opens in a small town which always seems to stock the deepest desires of each shopper, with a price far heavier than expected.

Synopsis: A shipwrecked survivor discovers a remote island with a mad scientist.

Synopsis: Haunting and horrific, surreal and shocking, HORSEHEAD is a new horror-fantasy that pays tribute to the classic European shockers of Dario Argento and Mario Bava while also remaining a unique film with its own vision, delivering unforgettable images that both disturb and enchant. Director Romain Basset s tale follows beautiful young Jessica (Lilly-Fleur Pointeaux) as she returns to her family s countryside estate for her grandmother s funeral. Haunted by recurring nightmares of a horse-headed monster, Jessica attempts to put her studies of lucid dreaming to good use, as she semi-consciously navigates through this dream landscape, trying to discover the secrets behind this sinister apparition. But Jessica must also cope with a hostile mother (THE BEYOND s Catriona MacColl), and the growing realization that the death of her grandmother was actually a suicide triggered by the woman s past traumas and visions. HORSEHEAD is a feverish, ethereal journey through the world of nightmares. PLEASE NOTE: This Blu-ray release was duplicated rather than replicated. Future Artsploitation releases will be replicated due to customer demand.

Synopsis: Hardened, uncomprimising drug dealer Roemello Skuggs decides to quit his scumbag profession so he may start a new life with his girlfriend. However, he soon learns getting out is nowhere near as easy as getting in, as everything gradually builds up to end in tragedy.

Synopsis: A rich but racist man is dying and hatches an elaborate scheme for transplanting his head onto another man’s body. His health deteriorates rapidly, and doctors are forced to transplant his head onto the only available candidate: a black man from death row.

Synopsis: After a botched bank robbery, a group of thieves clash with police and others while trying to hideout at a remote lake cabin, but unknown to them all, a recent mining explosion has unearthed a prehistoric T-Rex beast, who is the perfect hunter, and is very hungry. Now, they must all band together and fight to stay alive as this Jurassic predator hunts them down one by one, piece by piece. Bonus features include: Trailers and Promotional Videos, Behind the Scenes/ Making of featurette, Director’ Commentary

Lust of the Dead 5

Synopsis: The insane apocalyptic zombie saga continues! Watch the viral epidemic spread as the sex-crazed walking dead expand their rampage across post-nuke Tokyo! Can they be stopped? Can their perpetual lust ever be satisfied?

Synopsis: GHOUL is a supernatural horror film involving the real life story of the Soviet Union s most violent serial killer, Andrei Chikatilo. Three Americans travel to the Ukraine to film a documentary about the cannibalism epidemic that swept through the country during the famine of 1932. After being lured deep into the Ukraine forest for an interview with one of the last known survivors, they quickly find themselves trapped in a supernatural hunting ground.

Synopsis: A journey of self-discovery becomes a quest for survival as Ada (Lisa Friedrich, Least Favorite Love Songs) and Calvin (Micheal Foulk, Zero Charisma) encounter the darkness of the past and the unexplainable evil of the present in a town where the only visitors are the ones who’ve come to die. Featuring Dustin Runnels (WWE’s Goldust) and Jill Thompson (Scary Godmother), this intense character study and exploration of sexual trauma will have you covering your eyes and keep you guessing until its final minutes. Bonus features include: Theatrical Trailer, Interview with Dustin Runnels (WWEs Goldust) , Interview with Jill Thompson (Scary Godmother)

Synopsis: Following the tragic death of her parents, Fawn Harriman had counted herself lucky the day she inherited an abandoned playhouse in the small town of Amityville. With her sights set on a new life in the theater, she invites a group of friends to join her there for a weekend adventure that will ultimately lead them into the terrifying clutches of an ancient pact between the mysterious locals and a malignant presence that haunts the theater. As the stranglehold of evil grows ever tighter, Fawn’s teacher races to Amityville in a desperate attempt to rescue the imperiled party, and put an end to the town’s terrifying legacy once and for all.

Synopsis: Creating art can be brutal business, Brie knows. Following an ugly breakdown, she and boyfriend Brian retreat to Woodbine, an estate deep in the country, as guests of their mysterious benefactor Walter, who has offered to help Brie get back on track with her career. The couple is given full reign of the house, including the services of its keeper, the enigmatic Videl. All hope this new beginning will be productive for Brie, and help to erase the darkness of her past. But almost from the moment they arrive, Brie experiences unsettling and terrifying visions whispers in the hallways of the sprawling old house, ghostly visitations, and a demonic face glimpsed from the corner of the eye.

Synopsis: Based on a shocking true crime that took place on the Appalachian trail. Two female students set off for a camping trip into the Pennsylvania woods – but they are hunted, shot and left for dead by a mountain man after he discovers they are lesbians. A local sheriff soon begins to piece together more unsolved disappearances and murders on the trail, but can he act in time to stop more killings. Bonus features include: Trailers

Synopsis: Four young and beautiful women join a Satanic cult surrendering their will and bodies entirely to the Devil himself. Years later when they’re older women, Carlotta, starts to lose control of her 13 year old daughter Daria, who starts to develop strong powers of her own, aware of her powers and with extreme devotion to The Devil she starts speaking and behaving in strange ways like casting spells and harming people with no remorse whatsoever. And her powers seem to increase exponentially every single day. In her desperation, Carlotta and some of her friends enlist the help of a priest with a crisis of faith to help them perform a strange ritual that will hopefully vanquish the evil out of Daria once and for all. A rare and sought after Italian psychotronic horror classic that features some of the strangest ever shot on film. Filled with sexy bodies, blood, gore bizarre visuals and odd rituals.

Synopsis: Chef Ronnie is a charming celebrity chef who thrives and shines in her everyday life as owner and proprietor of Diabla Pica; a trendy Spanish tapas restaurant in San Francisco. Leading a double life, Chef Ronnie cooks internationally award-winning meals by day and her nights are spent in ways too gruesome to fathom. As Chef Ronnie and Diabla Pica’s reputation scorch up the top social circles; San Francisco’s murder count hits a record high. Being haunted by her past, in the form a vengeful lover, and being caught in the seductive cross fire of an increasingly serious relationship; Chef Ronnie has bitten off more than she can chew.

Synopsis: A disgruntled married couple and a hitchhiker are trapped in a gully during a tropical storm. Bonus features include: INTERACTIVE MENUS/TRAILER

Synopsis: From the director of Hold Your Breath, Jailbait and 12/12/12. Five friends set out on a road trip to see their favorite band Hulk Blood play a reunion show – but they never got there. What happens along the way will change the course of their lives forever as they are lost, stranded – and ready to do anything to survive the night. Bonus features include: Trailers

Synopsis: After two years in prison, John Spinelli is a free man. Upon his release, he moves into a halfway house known as ”Wellhome” which is notoriously overrun with looney tenants and strange occurrences that happen at 3:33 AM. John simply wants to get on with his life, stay clean and get his life on track, but he quickly becomes entangled in a mysterious web of bizarre murders. As he grapples with his mad mix of macabre neighbors, John realizes something evil governs his new neighborhood. Every night, outside his window, lights flash and strange noises come from the house next door which has a dark and sinister past. Can he convince authorities he is innocent of the murders? Or will he wish he was back behind bars?

Synopsis: Snuff Reel tells the story of a highly educated and obsessive Art student who will stop at nothing to create the masterpiece she wants. Kirsty Ruler (Kristy Hopkins) uses and manipulates her friends with extreme wild fantasies that promise to make them feel the ultimate pleasure, but the ecstasy of this pleasure brings each participant very close to death. However these fantasies are no longer enough to subdue the deep twisted urges that begin to take control of Kirsty. It is up to Detective Beckett (Maria Lee Metheringham) to solve and put a stop to the string of murders in the small town of Ravenspurn…even if it means becoming the art herself.

Above Us Lives Evil

Synopsis: When an accident takes the life of their young boy, his family moves and finds a picturesque location seemingly ideal for a new beginning. Little do they know that something is amiss in their new neighborhood as creepy neighbors and strange occurrences begin to distract their daily life. Slowly they realize that there is something much worse than their memories and guilt dwelling within the house. The attic harbors an ancient evil so strong it confronts the family’s deepest fears and drives them against one another and the new dream home soon becomes a house of unspeakable horrors.

Synopsis: A Goth couple who also happen to be serial killers seduce and kill a young executive. Before dying, he alerts a friend, a Bourbon street bouncer, who searches the famous French Quarter of New Orleans for the killers before they strike again.

Synopsis: Janey is sent to a silent meditation retreat in the middle of the woods for rehabilitation, only to discover that the men who run it are brainwashing women to be quiet and submissive, and if she breaks the rules, she’ll discover what lurks beyond the trees…

A married couple grieving the recent death of their little daughter are in Venice when they encounter two elderly sisters, one of whom is psychic and brings a warning from beyond.

After moving into a suburban home, a couple becomes increasingly disturbed by a nightly demonic presence.

A troubled young man retreats from the big city and his ex-wife for the tranquility of a small town. He is drawn into a relationship with a young woman whose boyfriend goes missing, leaving the new arrival as a suspect.