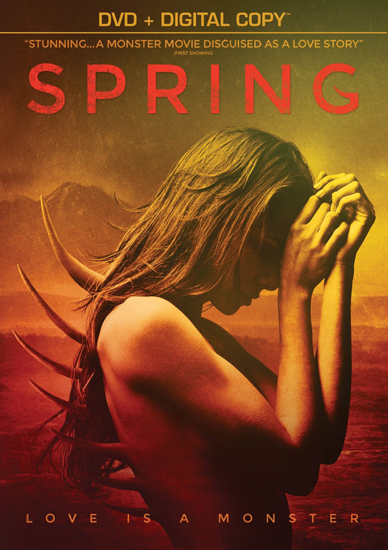 Synopsis: Evan (Lou Taylor Pucci, Evil Dead, Thumbsucker) is a young American fleeing to Europe to escape his past. While back-packing along the Italian coast, everything changes during a stop at an idyllic Italian village, where he meets and instantly connects with the enchanting and mysterious Louise. A flirtatious romance begins to bloom between the two however, Evan soon realizes that Louise has been harboring a monstrous, primordial secret that puts both their relationship and their lives in jeopardy. A beautiful, fluid genre-bender from Justin Benson and Aaron Moorhead (Resolution), Spring is an unforgettable romance of mythical proportions.

Synopsis: A veteran hostage negotiator’s next call leads him to an overrun insane asylum. He soon finds that dark forces are pushing the patients to commit atrocities, and he may be the only one that can stop them.

Synopsis: A series of cryptic phone messages and visions haunt a writer while he struggles to finish a novel. As they increase in intensity, he loses his grip on reality, eventually obsessing over an old mystery that will lead to horrific revelations about both him and his loyal wife.

The Poltergeist of Borley Forest

Synopsis: On a night of carefree teenage partying in the woods, Paige Pritchard unwittingly sets in motion a chain of events that will plunge her into a waking nightmare. Tormented by terrifying and increasingly violent supernatural visitations, Paige starts digging into the past and uncovers a sinister secret, buried for decades. Behind the deadly force that now haunts her is a malevolent entity of unspeakable evil. As its power grows and her friends fall prey to its savagery, can she – or anyone – stop The Poltergeist of Borley Forest?

Synopsis: Theo and his pregnant fiancée Rose are a young couple who set out to rekindle their romance by going on a camping trip in the remote Scottish Highlands. But when ghostly apparitions begin to possess Rose and her unborn child, their lives quickly descend into a nightmare from which they cannot escape.

Synopsis: Eloy de Palma is an exorcist pastor roaming the darkest corners of the country with his granddaughter Alba. Their mission is to help those possessed by The Evil One, an infection of the soul that is spreading fast among the most vulnerable members of society: children, mental patients, and drug addicts. With a mysterious cult also following their every move, their battles are becoming increasingly difficult. And each exorcism reveals a piece of young Alba’s forgotten past – an enigma that if unconcealed could change the world as we know it. A white-knuckle suspense ride, ASMODEXIA is a fresh new twist on the exorcism formula and a thoroughly chilling film that will haunt you long after the final frame.

Synopsis: The action picks up directly following the events of Hayride when the survivors, including Amanda (Sherri Eakin) arrive at the county hospital to recover from the previous night’s savage massacre. Unfortunately for them, the survivors are not the only ones en route to the hospital. Rayborn, the local farmer known as Pitchfork, who Paramedics make the mistake of thinking is incapacitated from his wounds, brutally attacks them leaving the ambulance crashed in flames on the side of a country road. The seemingly invincible Pitchfork is on the loose again with one location in mind…the hospital. Meanwhile, Detective Loomis (Corlandos Scott) recent brush with this legendary monster seems to fuel his need to uncover the secrets of the man behind the mask. Where was he hiding for 20 years? Loomis finds that to stop a killer he must first learn his history, which may be closer than anyone could imagine.

Synopsis: An average day in a quiet suburb becomes ground zero for the end of the world that we knew. When a fast-spreading global pandemic turns ordinary people into flesh-eating monsters, a handful of terrified survivors and the remnants of an army squad find refuge in an elementary school turned emergency shelter. With the hordes of walking dead trying to get in, scarce weapons and a dwindling food supply, the embattled refugees begin to turn on each other. As they slowly perish, they desperately attempt to escape and determine if they are the last uninfected humans left on Earth.

A Haunting on Gabriel Street

Synopsis: Logan Lewis and 41 others are reported dead on Gabriel Street in Los Angeles. The government quickly releases an unconvincing statement blaming exposure to a uranium source located beneath the house. Broken and confused by her brother’s death, Logan s sister and 2 friends seek answers and closure to their living nightmare. Obsessed with uncovering a possible conspiracy, they journey to the house in search of the truth, but what they find is unlike anything they ever expected. Not everyone in the house that night is dead…