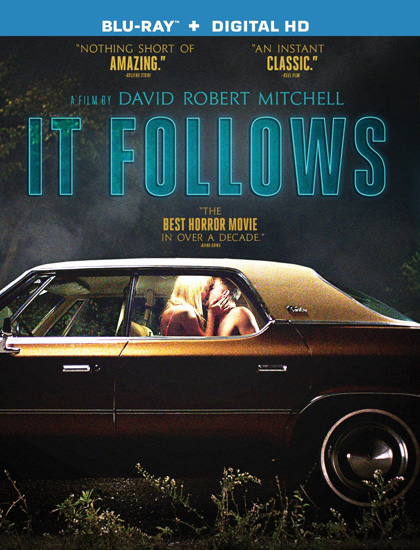 Synopsis: For 19-year-old Jay, fall should be about school, boys and weekends out at the lake. But after a seemingly innocent sexual encounter, she finds herself plagued by strange visions and the inescapable sense that someone, or something, is following her. Jay and her teenage friends must now find a way to escape the horrors that seem to be only a few steps behind in this critically-acclaimed chiller that Bloody Disgusting calls the scariest movie of 2015.

Howling II: Your Sister Is A Werewolf [Blu-ray]

Synopsis: Your Sister Is A Werewolf!

After countless millennia of watching, waiting and stalking, the unholy creatures known as werewolves are poised to inherit the earth. Legendary horror icon Christopher Lee faces off against sexy cult favorite Sybil Danning (Battle Beyond the Stars, Chained Heat, Grindhouse) in this terrifying descent into a world of nightmares that turns out to be all too real!

After newscaster Karen White’s shocking on-screen transformation and violent death (in the original The Howling), her brother Ben (Reb Brown, Yor, the Hunter of the Future) is approached by Stefan Crosscoe (Lee), a mysterious man who claims that Karen has, in fact, become a werewolf. But this is the least of their worries… to save mankind, Stefan and Ben must travel to Transylvania to battle and destroy Stirba (Danning), the immortal queen of all werewolves, before she is restored to her full powers!

Also starring Annie McEnroe (The Hand) and Marsha A. Hunt (Dracula A.D. 1972), directed by Philippe Mora (The Marsupials: The Howling III, Communion, The Beast Within), and driven by a pulsing punk-y soundtrack, this film is a no-holds-barred horror-fest that’ll rip your heart out… and you’ll like it.

• Queen of the Werewolves – An Interview With Actress Sybil Danning

• Behind the Scenes Footage (in HD – from Philippe Mora’s archive)

The Outing / The Godsend [Blu-ray]

An ancient genie is released from a lamp when thieves ransack an old woman’s house. They are killed and the lamp is sent to a museum to be studied. The curator’s daughter is soon possessed by the genie and invites her friends to spend the night at the museum, along with some uninvited guests.

When a strange woman has her baby at the Marlowe’s house, then disappears, Kate Marlowe is forced to keep the baby, Bonnie. She loves the child, but when her own children are systematically killed, suspicion turns to Bonnie.

The promising career of a horror comic book artist ends in a fiery death when he confronts the bloody carnage of his own imagination in his studio. Years later, an ardent devotee of the artist’s work becomes a resident in his house, now an art academy, unaware that her imagination has revived the grotesque murderer of the past…and that she may be the next victim.

For over 400 years, the curse of the Abbey at San Pietro was kept a secret. Buried deep beneath the monastery lies the Beast of the Apocalypse. The power of evil is unleashed when an American priest and a beautiful young schoolteacher uncover the unholy terror of a diabolical spell cast centuries ago. Now, it will take the ultimate sacrifice to stop the curse that will not be denied.

Synopsis: A Southern gothic retelling of Sheridan LeFanu’s Carmilla, THE UNWANTED stars Hannah Fierman (V/H/S) as Laura, a vulnerable young woman beguiled by a drifter (Christen Orr) who has come to her rural town in search of clues to her mother’s disappearance. The two women uncover dangerous secrets kept by their mothers, arousing the suspicion of Laura s father (William Katt, Carrie, TV’s The Greatest American Hero ) who will go to shocking extremes to ensure that the family’s dark secrets remain buried.

Synopsis: Jo O Hare starts out as a typical teenager dealing with typical teenage problems, including fighting with her parents and dealing with an unfaithful boyfriend. Soon Jo finds herself much bigger problems when she is accused of recklessly causing the death of a young boy in her care. The unbearable guilt turns to determination when she sets out to prove that the outrageous, neighborhood ice-cream man is really a psychotic monster responsible for the disappearance the boy. With the help of her ex-boyfriend, Ben, Jo begins a journey to find the truth which will lead her to the darkest side of evil and put everyone s life around her in jeopardy.

Synopsis: It should have been just a normal day of sex, fun, alcohol, hormones and debauchery for Tabitha and Mimi, two over privileged twenty somethings who care about nothing but themselves and what chaos they can cause. But that so-called normalcy gets tossed out the window when an unexpected and devastating event occurs at a nighttime pool party. As the alcohol begins to wear off and the body count rises, all hell breaks loose and there is no turning back.

“It will forever leave a lasting mark on your mind” –bucketofcorn.com

“Gripping and disturbing to watch” –scaredstiff.com

Synopsis: A troubled teen, Mysti, possesses a brilliant mind but a sincere disdain for humanity as she proclaims the number one problem on the planet to be human overpopulation. With her mother recently deceased under mysterious circumstances, Mysti is estranged from the outside world and delves headlong into the world of the Occult. When her aunt Aurelia decides to visit she is shocked to see that Mysti is brewing Ayahuasca, the Shamanic ”vine of souls” and is crossing over into the ”other world,” a very dangerous endeavor often producing extreme consequences. But Aurelia is too late; Mysti has opened a portal into the Paranormal and unleashed an elemental force that has attached itself to her. Aurelia is no stranger to the Spirit World and they discover their shared heritage when Aurelia invokes an Ancient Witchcraft ritual in an attempt to expel the entity. The extreme demonic force taunts and tortures them both until finally emerging into this reality with its sole purpose being to consume those who brought it forth. Awesome Magazine, in reviewing Shadow World, said that it ”Takes American Horror Story to another level” and Extreme DVD declared that it is ”Horrifyingly original.”